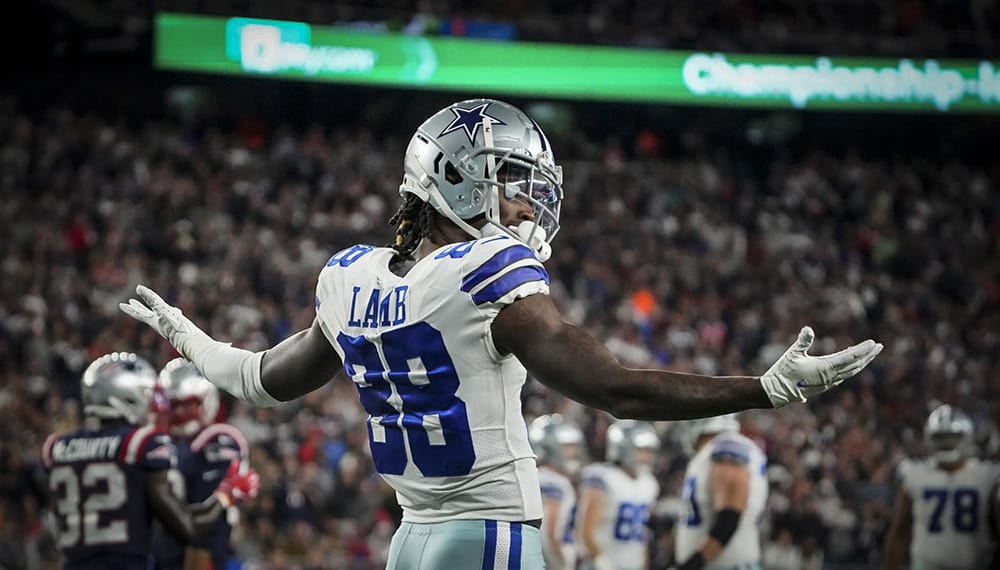 Our NFL Player Props were flat-out terrible in Week 10 with a 1-4 record. Our only winner was on Dalvin Cook to rush for over 85.5 yards. It was just a weird NFL Sunday for a lot of folks.

We need to bounce back in a big way this week. All of these lines are from TwinSpires Sportsbook. Best of luck with all your action, be sure to check out our best bets for week 11.

We think this is a great spot to bet on Justin Fields to have a big game. The Chicago Bears are coming off their bye week so they should be rested and raring to go against the Baltimore Ravens. The Bears lost to the Steelers on Monday Night Football their last time out but Fields put up a nice stat line (17/29 for 291 passing yards).

If Fields can do that well against a pretty decent Steelers defense, he should be able to have a “Field(s) Day” (haha) against this atrocious Baltimore secondary. Did you know that the Ravens rank dead last in the league in passing yards allowed per game (283.3)? That’s hard to believe considering this team is normally so strong on that side of the ball.

Fields has had a tough rookie season to this point but he’s shown flashes of brilliance at times. This could be the week that Fields puts it all together, especially since he and head coach Matt Nagy have had two weeks to prepare for this game. We think Fields easily racks up over 250 yards through the air. Take the Over!

We love how much Jalen Hurts has improved this year as an NFL QB. However, the former Alabama / Oklahoma star may not be able to do much damage with his legs against this New Orleans Saints defense.

The Saints are the best team in the league at stopping the run. This unit only allows 72.9 rushing yards per game. They also only allow 3.1 yards per rush, which also leads the league.

Could Hurts go over this rushing yardage total? Absolutely, but we think that it’s highly unlikely. Hurts ran for at least 55 yards against Denver, LA Chargers, and Detroit.

However, those three teams all have awful rush defenses. The sledding will be much tougher against the Saints. We think defensive coordinator Dennis Allen will find ways to keep Hurts in check. Take the Under here!

Kittle looks to finally be close to 100% healthy after an injured calf caused him to miss a few games earlier this season. The former Iowa star had a breakout game against the Cardinals a couple of weeks ago where he ended up with 101 receiving yards. That performance reminded everyone that Kittle is still one of the best tight ends in the league.

Kittle played pretty well against the Rams on Monday Night Football last week but only racked up 50 receiving yards. That’s not too bad when you consider that the Rams have a pretty solid defense. It was also good to see that the Niners targeted Kittle seven times against the Rams because earlier in the year he was only getting four or five per game.

We see Kittle going off this week against Jacksonville. The poor Jags secondary ranks 25th in passing yards allowed per game. They also rank 27th in yards per pass allowed, so Kittle may be able to catch a few deep post patterns over the middle.

Could the Niners suffer a bit of a hangover after the huge victory on Monday Night Football? Maybe, but we don’t see that happening. San Fran is 4-5 and they know they need to go on a long winning streak to get back in the playoff hunt. Play Kittle’s receiving yards over the total!

While Amari Cooper still gets a lot of attention and rightfully so, CeeDee Lamb is now the main playmaker on this Cowboys’ receiving corps. Lamb seems to always come up with big catches in crucial situations and he’s becoming a favorite target of Dak Prescott’s. We don’t understand why this total is so low, especially since Lamb is averaging 80.7 yards per game this season.

The former Oklahoma star has eclipsed this total six times already this season. There’s no reason to think that the Chiefs defense will slow Lamb down either. Though the Chiefs have played better defense of late, they still only rank 23rd in passing yards allowed per game.

The total for this game is 56 points, which is by far the highest number on the board this week. This means there should be more than enough offense to go around for each team. We think Lamb is the focal point of Dallas’s offense on Sunday so take his receiving yards to go over this total.

The emergence of rookie Ja’Marr Chase has hurt Boyd’s productivity. The 27-year old still has plenty of talent but he often gets lost in the mix with Chase and Tee Higgins getting the majority of the targets. We see that happening again this Sunday against the Las Vegas Raiders.

The Raiders have a sneaky good pass defense. This unit is only giving up 231 passing yards per game, which ranks a respectable 12th in the league. This defense should also be pretty fired up after an embarrassing showing on Sunday Night Football last week against the Chiefs.

In Boyd’s last five games, he’s only gone over this yardage total once! We think the Raiders will do a pretty good job of containing the Cincy passing attack in this one. Take Boyd’s receiving yards to go Under this total.