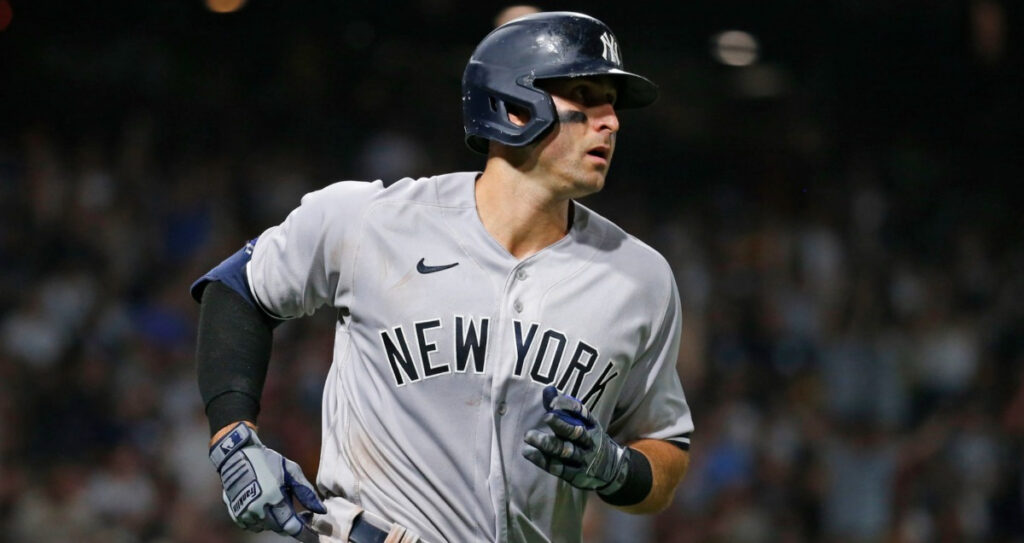 Though he's been the subject of trade rumors, we look for Joey Gallo to do well tonight for the Yankees as one of our 2 MLB best bets for Monday.
By Mike Noblin on August 1, 2022

After a harrowing July, we have finally made it to August! This is a great month to recharge the batteries before football season takes center stage. It's also an excellent time to work on building the bankroll for both college football and the NFL.

Our MLB best bets went 1-1 on Friday, as the Dodgers blew a three-run lead in the bottom of the ninth to only win by one. This spoiled our run line bet and kept us from the 2-0 sweep. The breaks just haven't gone our way of late, but we trust that they'll even out in August. Here are 2 MLB best bets for Monday, August 1.

It's been a bit odd watching the Yanks struggle of late. They've only won five out of their last ten games and are coming off a bad loss to the Royals yesterday. It's clear that this New York lineup misses Giancarlo Stanton badly!

All of that said, Seattle is dealing with some injury issues of their own. Rookie sensation Julio Rodgriguez is on the IL with a wrist injury and 3B Ty France is also dealing with a sore wrist. The Mariners have cooled off considerably since the All-Star break, as they have won just four of their last ten games.

Marco Gonzales is a solid starter for Seattle but we think this Yankees lineup can knock him around tonight. Joey Gallo is hitting .300 against Gonzales in his career with two homers and 7 RBI. Aaron Hicks has also homered off of Gonzales in only three at-bats against him.

Domingo German's numbers still look awful but he actually pitched much better against the Mets last week. He only allowed two runs and struck out seven in 4.2 innings of work. We expect German to have an easy time against a Seattle offense that only ranks 23rd in runs per 9 innings (4.09) and 25th in batting average (.233).

We'll be honest, this White Sox team scares the heck out of us, especially since they burned us against the Rockies last Wednesday. Nevertheless, we have to trust our numbers and play the better overall team in this matchup, even with a higher juice. The Chi-Sox have won six of ten while the Royals have only won four of ten.

The South Siders have a clear edge in starting pitching in this one. Kansas City starter Brad Keller (5-11, 4.18 ERA) has been roughed up for most of the season and seven of Chicago's hitters have homered off of Keller in their careers. The 27-year-old righty is coming off of back-to-back losses and he allowed seven runs and eight walks in those two starts.

Michael Kopech is only 4-6 on the year but it's mainly been due to poor run support. His ERA of only 3.16 is pretty good and his WHIP of only 1.21 isn't bad either. We envision Kopech keeping this Royals lineup at bay, especially if Bobby Witt Jr. (sore hand) can't go.

Have a marvelous Monday everybody! Let's put both of these in the W column! Good luck!