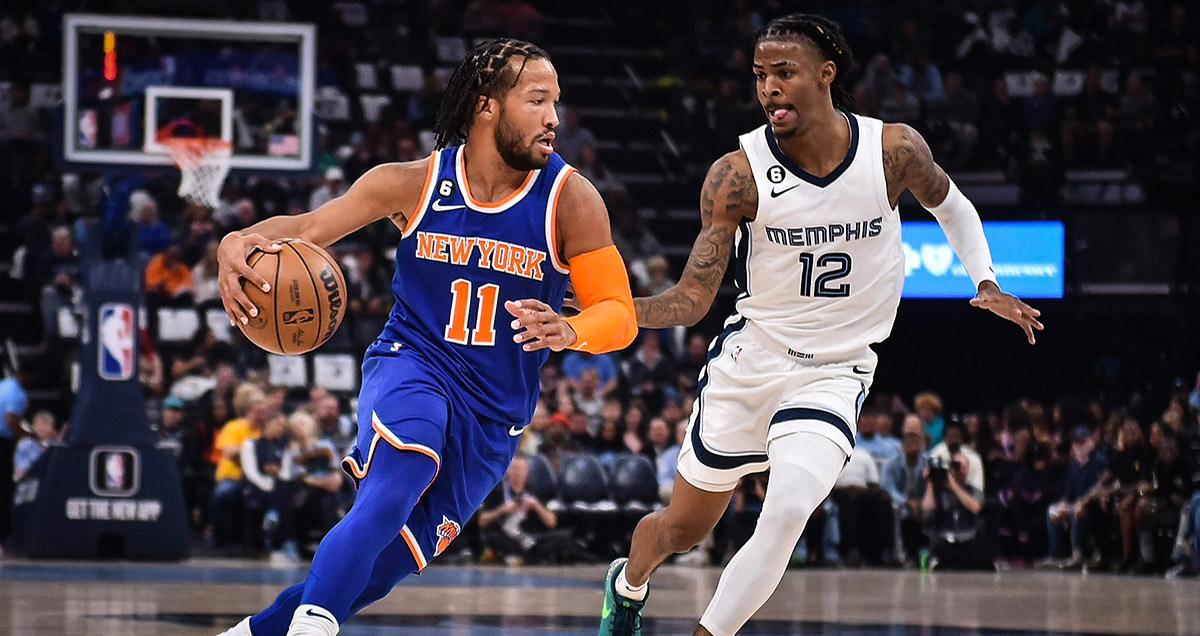 Friday night's 12 game NBA slate includes an ESPN doubleheader that tips off with Chicago at Boston at 7:30 PM followed by Milwaukee at Golden State at 10:00 PM. We were a Wendell Carter half-rebound from running the table with our 6 props picks last night, so let's look to match (or better) that performance on Friday.

We have a total of 7 props picks tonight, including a same game parlay for the Warriors vs Pelicans game.

The Knicks are in the top half of teams in scoring per game and will face a Harden-less 76ers team tonight. Brunson is averaging over 18 points per game and has gone over this total in 4 of his last 6 games. Brunson is a Philly kid and played at Villanova so he will have plenty of fans in the crowd and will want to show out for them. He should get 20 without much resistance.

Bane has been scoring at an insane rate over his last 4 games as he is averaging 32.5ppg over that span. He did take a game off due to an ankle injury but followed that by dropping 29 in his next start. Tonight he faces a bad Hornets team that may let the game get away quickly. With Bane still nursing the ankle a bit, we wouldn’t be surprised if his time and scoring is a bit limited in this contest.

Markkanen is averaging 9 boards per game and has gone over 8 boards in 4 straight games prior to his game against New Orleans last night. Tonight, he gets the Lakers, who are allowing the most rebounds to opposing teams in the league. 51.43 is the average amount of rebounds opponents are getting on these Lakers. Markkanen should get double-digits, that said, playing him to get a double-double wouldn’t be a bad play either at +185.

Holiday is dishing out over 7.5 assists per game on the season. His Bucks face the Timberwolves tonight who allow the most assists to opposing teams in the league. Opponents have averaged almost 30 assists per game against this Minnesota team that does not play the best rotation defense. Jrue should be able to expose them with top-scoring option Giannis at his disposal.

We are targeting three Pelicans in our same game parlay tonight. The Warriors are allowing a league-high 122.2 points per game, while New Orleans averages the 2nd most points per game on the season. Bet the over!

Zion is averaging almost 1.5 steals per game on the season and is coming off his 1st non-steal game in 5 games. He should get one here against a Warriors team that can speed things up to their own detriment at times. Both Ingram and CJ are averaging 20+ points per game, if the Pelicans are going to keep this close, they will both need 15 or more in this one.

Big shoutout to Caesars Sportsbook who, for the first time this season, had the leader in best odds from our prop picks. This marks only the second this season that a sportsbook other than DraftKings has taken the honors!

Sports betting is a game of inches! Unfortunately, we found that out all too well with our NFL PrizePicks props on Monday Night Football. We ended up 1-1, but the lone loss was indeed a cruel one. We played Jonathan Taylor to stay Under 85.5 rushing yards and he ran for (you guessed it) exactly […]

Our NBA player props went up in smoke last night as we endured the dreaded reverse sweep. The sad thing was none of those plays were even close to winning. In sports betting, you have to be prepared for the inevitable highs and lows that come with the business. Tuesday means that we get the […]

The Tuesday night NBA slate features only three games but includes what should be an entertaining doubleheader on TNT. The Warriors travel to Dallas to take on the Mavericks at 7:30 PM, followed by the Clippers at the Trail Blazers at 10:00 PM. The only other game on the schedule tonight is the Knicks at […]

Is there anything worse than a truly bad beat in sports betting? You go from thinking you've got an automatic winner to trying to figure out how the heck your bet lost! Needless to say, it's incredibly maddening! Sports bettors tend to remember all of the bad beats and none of the wins where we […]