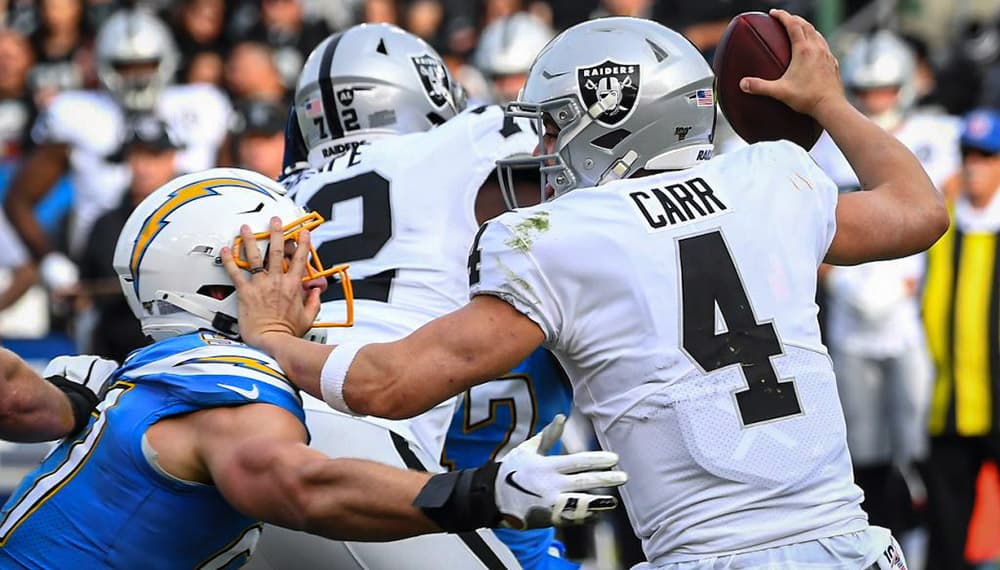 How to Bet on the Raiders' Inevitable Collapse

Let me start this article off with a clear statement. I do not believe the 2021 Las Vegas Raiders will make the playoffs. The Raiders are currently 4-2 and sitting at 2nd in the AFC West after defeating the Broncos handily, on the road, 34-24. This game was actually not even as close as this score suggests, as Noah Fant picked up a garbage-time touchdown with one minute left in the game that brought this to within two scores. The Raiders won the turnover battle with four takeaways to the Broncos none.

While the victory was impressive, I think it says a lot more about this flawed Broncos team than anything else. See my previous action on the Broncos adjusted win total from a few weeks ago...

All feelings aside on Jon Gruden, his departure will certainly play a role in how the rest of the season plays out for the Raiders. Gruden is a poor defensive coach and generally a terrible in-game decision-maker. The one thing that Gruden has done well or at least passable as the Raiders head coach has been his offense’s design. Gruden’s play calling can be questionable in crunch time, but generally, he is pretty good at designing effective drives.

Ironically, playing without Gruden, the Raiders had their best offensive performance in Week 6. Carr spread the ball around and played to a QBR of 85.2. The Raiders also had the highest EPA/play of any team in Week 6.

Although the Broncos' defense hasn’t been bad in 2021, they certainly aren’t the staunch unit they have been in years past. They actually rank towards the bottom half of the league in defensive DVOA. I think this will be one of the best offensive showings for the Raiders all year and we can expect some regression from the high point. The Raiders played with some real purpose following Gruden’s resignation, which was a real positive sign of heart from the team. That being said, I don’t think this team can avoid mediocrity much longer.

PointsBet is offering all new players an instant $200 bonus with any $20 bet on Thursday Night Football. Here is how the offer works:

Derek Carr has been better than average this season and a little bit better than his most average career. He has a 65.5 QBR on the season and has a proclivity for moving the ball around. They’ve been utilizing Henry Ruggs as a true deep threat and TE Darren Waller has the ability to become a target hog whenever necessary.

The defense has been solid, led by DE Maxx Crosby. They have consistently gotten pressure on quarterbacks which has helped support their poor secondary. The Raiders have also been able to do this without a high blitz percentage. That being said, they simply lack the talent on both sides of the ball to be considered in the upper echelon of NFL teams.

Looking back at the Raiders schedule, it’s a bit of a mystery and simply too early to call it an “up and down” season. The Raiders probably had the most impressive Week 1 Raiders beating out potential 2021 MVP Lamar Jackson. They’ve followed that victory up with victories against the Steelers, Dolphins, and Broncos. However, they had a head-scratching home loss to the Chicago Bears at home where they looked like one of the worst offenses in the league.

The Raiders schedule is also about to get more difficult. They have still yet to play the Chiefs and have matchups against the much improved Bengals, the Cowboys, and the Browns on the horizon. I make the Raiders underdogs in all five of those matchups and the Raiders playoff hopes likely rely on knocking either the Chiefs, Chargers, Browns, Broncos, or Steelers out of contention.

While it’s not out of the question, I really think we should be paying more than -130 to bet against it. Remember; the Raiders preseason season win total was seven. Although they have a 4-2 record, they’re only one game ahead of where I expected them to be at this point. Simply getting over their win total will not be enough to make the playoffs in a deep AFC conference.

The play: Bet the Raiders NOT to make the playoffs at -130. Before you turn away, consider the short-term schedule as well. The Raiders' next three are Eagles, BYE, and Giants. I consider Philly a live dog this week and am currently leaning towards taking a wager on them to cover or beat the Raiders. However, if the Raiders should beat both these teams, which they should, you’re going to get an even better price on this bet.

I happen to think that the Raiders drop an easy one in true Raiders fashion, but should we be looking at a 6-2 Raiders team, don’t be surprised. I’ll add to this wager for another half unit if I get +110 or better in Week 9.