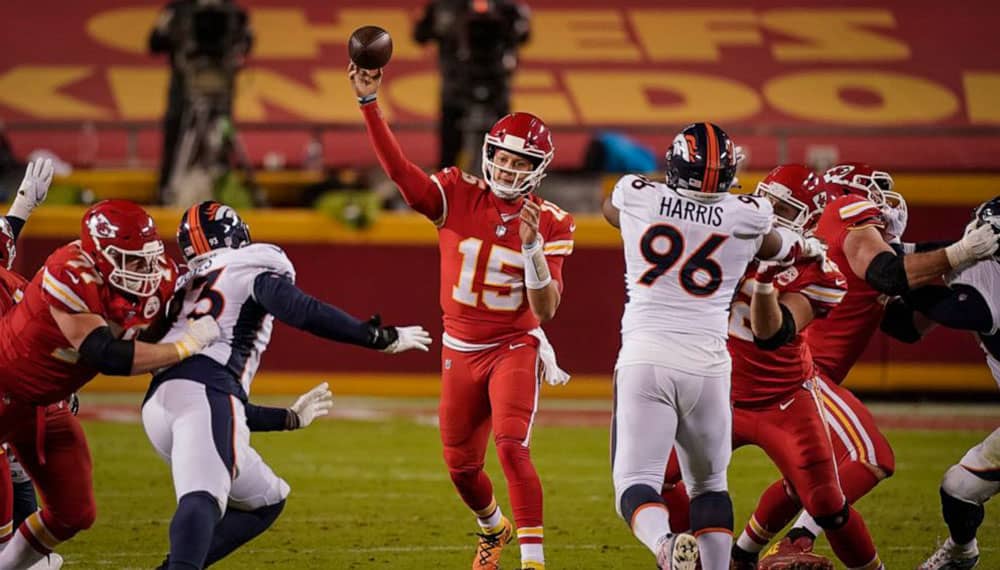 Is it just me or are we overreacting to the Broncos 3-0 start? The Broncos and the Raiders are both 3-0 to start the season and are the only undefeated teams in the AFC West. The pre-season Super Bowl favorite Kansas City Chiefs are 1-2. The NFL seems backwards through three weeks… or does it?

This conversation has to start with scheduling. The Chiefs opened up the season with three straight tough matchups in Cleveland, Baltimore, and the Los Angeles Chargers. You could make the argument that the 1-2 Chiefs should actually be 0-3, if not for some miscues by the Browns. The Chiefs now face the Eagles in Week 4, but immediately follow that with an SNF football matchup against Buffalo in Week 5 and a less-than-ideal travel matchup with the Football Team in Week 6.

On The Noise Podcast, my co-host Ensar predicted that the Chiefs would start the season 3-3 and that 4-2 would be a “best-case scenario.” Through three weeks that looks to be an accurate description. Betting NFL futures can be like trading stocks. “Buy low and sell high” principles are in effect here on the Chiefs.

New PointsBet players that register using the promo code BVFBMULTI1 will receive $200 free with any $20 NFL or CFB wager. Just follow these steps:

Buying Low on the Chiefs

Currently, the Chiefs are +100 to win the AFC West and +650 to win the Superbowl. I’m interested in the division price right now, as I think some regression is due for the other teams in this division (more to come on that later in this article.) I’d like to “buy-low” on the 1-2 Chiefs but I don’t quite think this is the bottom. If the Chiefs fall to Buffalo or especially if they lose to Washington, I think you can see improvement on that price and I’d love to be involved closer to 8/1.

Keep in mind, the Chiefs/Chargers game was the first divisional matchup of the season. The Chargers, Broncos, and Raiders will start to beat up on each other in the coming weeks. No matter how much you value the hot starts for all three of those teams, you can’t say that they would be favored in a single game against the Chiefs no matter the venue.

With that in mind, +100 might be the only chance at plus money for the Chiefs to win the AFC West that we’ll ever see. With the Chiefs expected to be favorites in virtually every single game, we should also have very easy hedging opportunities late in the year, if you subscribe to that strategy.

Selling High on the Broncos

The bet I really like here is on, or rather against, the Denver Broncos. After the Broncos' Week 1 victory against the New York Giants, Draft Kings re-opened their win total at 10.5 after closing the pre-season at 8.5. After subsequent victories against the Jaguars and the Jets, the total is still at 10.5 with +110 juice on the under.

I’m struggling to understand what warranted such a move. Yes, they beat up on these three teams, but we’re talking about potentially three of the worst six teams in the league. Denver has beaten them all handily… as they should. They don’t get any extra points in my book for going on the road and beating the Giants or especially the Jaguars, no matter what their point differential looks like right now. As previously mentioned, the AFC West is looking to be a formidable division and I certainly don’t put it past this Broncos team to sneak in as a Wild Card. However, I’m getting plus money on the third-best team in this division to finish less than 11-6? That’s a bet that I’m going to make every time.

Even a fairly aggressive projection, without accounting for any injury possibility, leaves me at 10 wins maximum for this team. Going 3-0 in their first three games wasn’t surprising at all. I would go as far as to say, don’t be surprised to see a 5-1 Broncos team come Week 7. I was close to betting their win total Over 8.5 in the pre-season but held back due to question marks about their passing game and secondary. Taking that preseason Over and then betting the Under 10.5 in-season would have been one of the best middling opportunities possible.

Their WR core has taken a hit with star Jerry Jeudy out multiple weeks and KJ Hamler going down for the season with an ACL injury. The Broncos will likely be ok for the time being with both their running backs healthy and Teddy Bridgewater looking ready and willing to spread the ball around. Analysts and bettors alike were giving the Broncos a long look to sneak into the playoffs in 2021 and be a thorn in the side of the top AFC teams. That being said, nothing we’ve seen in three weeks has warranted a two-game improvement on their season projection. This line overestimates the Broncos and I will continue to bet it if the line improves.