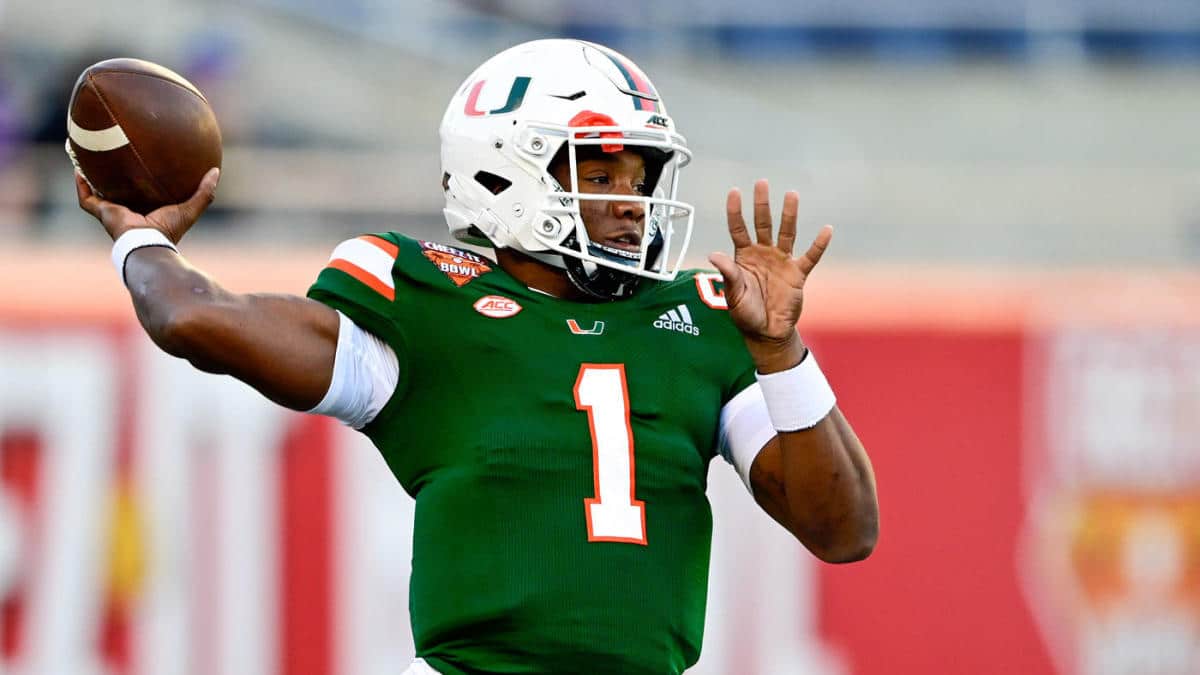 How will things shake out in 2021? Will another young gun from Alabama like Bryce Young (+1000) or John Metchie (+6000) take home the coveted hardware? Many experts expect stud quarterbacks like JT Daniels and Sam Howell to put up eye-popping numbers this season.

Although Smith won it last season, the Heisman has primarily been a quarterback award. Oddsmakers say that trend is likely to restart in 2021 as nine of the top ten favorites on the Heisman betting board are quarterbacks.

Where is there betting value on this season’s early Heisman board? First, we will list the top 15 favorites on the board from our friends over at Fanduel. Then, we will profile three players that we think are worth wagering on to win the 2021 Heisman.

No one on this board has more game experience than D’Eriq King from the Miami Hurricanes. 2021 will mark King’s sixth season in college football. The 5-11, 202 pounder is an adept passer and has plenty of speed to make any defender look silly.

King has had a tremendous amount of success in his collegiate career with both Houston and Miami. In fact, King has tossed 73 touchdowns in his career and only thrown 15 picks. The Manvel, Texas, native also shows dynamic running ability as evidenced by his 32 career scores on the ground.

The Canes had a decent 2020 season by posting an 8-3 overall record. King was a big reason for that success as he was responsible for 27 touchdowns. We expect an even more electric season from King in 2021. Canes fans were absolutely thrilled that King decided to return to school again this year.

Why are we betting on King to win the Heisman? He is the most experienced player on the board, as well as the most exciting to watch. It takes lots of crazy highlight plays to win such a prestigious award, and King makes those types of plays on a weekly basis. Getting 16 to 1 almost feels like stealing!

It is a good possibility that Breece Hall might be the best running back that you've never heard of. Did you know that Hall finished sixth in last year’s Heisman voting? That makes him the highest Heisman vote-getter returning in 2021.

Hall was instrumental in the emergence of the Iowa State football program. Last season as a sophomore, Hall scored 21 rushing touchdowns as well as catching a couple of scores out of the backfield. Hall led the entire country in rushing yards last season with 1,572 and also made the All-American team unanimously.

Both of Hall’s friends, head coach Matt Campbell and QB Brock Purdy, are both back in Ames and poised for another fabulous season in 2021. If the Cyclones can get over the hump and win the Big 12 title, that would only increase Hall’s chances of taking home the coveted Heisman hardware. The 6-1 215 pounder has the rare ability to not only run by defenders but run over them as well. We will take 40 to 1 odds with a player of Hall’s many talents any day! 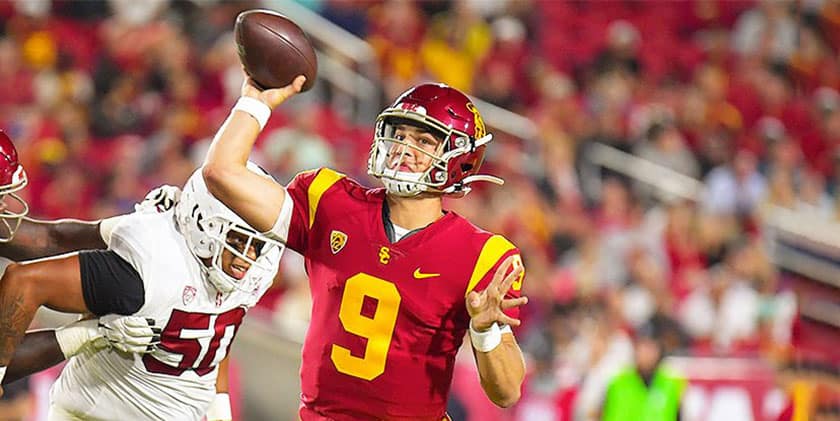 Most of the 2021 Heisman hype is centered around quarterbacks like Spencer Rattler, JT Daniels, and Sam Howell. All three of these guys are fine signal-callers but Kedon Slovis belongs right up there with them. We were a bit shocked to see Slovis at such a generous price and will gladly hop on the train at 20 to 1 odds.

Slovis has put together back-to-back sizzling seasons for the USC Trojans, and we expect 2021 to be his best year yet. The 20-year old has 47 touchdown passes already in his young career. This kid has the kind of rocket arm that has been known to win Heismans in years past.

The 6-2, 200 pounder should be able to feast on a fairly weak PAC 12 schedule in 2021 and really pad his numbers. Throw in the fact that USC always has plenty of blazing-fast receivers, and that makes us like Slovis to win the Heisman even more. If Slovis can have a huge game against archrival Notre Dame on October 23rd, that could catapult him into the Heisman race in a big way!

Why is Spencer Rattler the early 2021 Heisman favorite?

We are a bit surprised that Rattler is the early Heisman favorite at +650 odds. However, it does kind of make sense when you consider how many Heisman-winning quarterbacks have come out of Oklahoma. Lincoln Riley does a terrific job of coaching up quarterbacks, as evidenced by former Heisman winners like Kyler Murray and Baker Mayfield.

Rattler had a tremendous freshman season for the Sooners in 2020 by throwing 28 touchdowns and running for six more scores. The former five-star recruit definitely has the supreme ability needed to win a Heisman. However, we think Rattler may need another year to fully develop before being considered the Heisman frontrunner! Also, Rattler’s Heisman odds of only 6.5 to 1 just don’t have much value in our opinion.