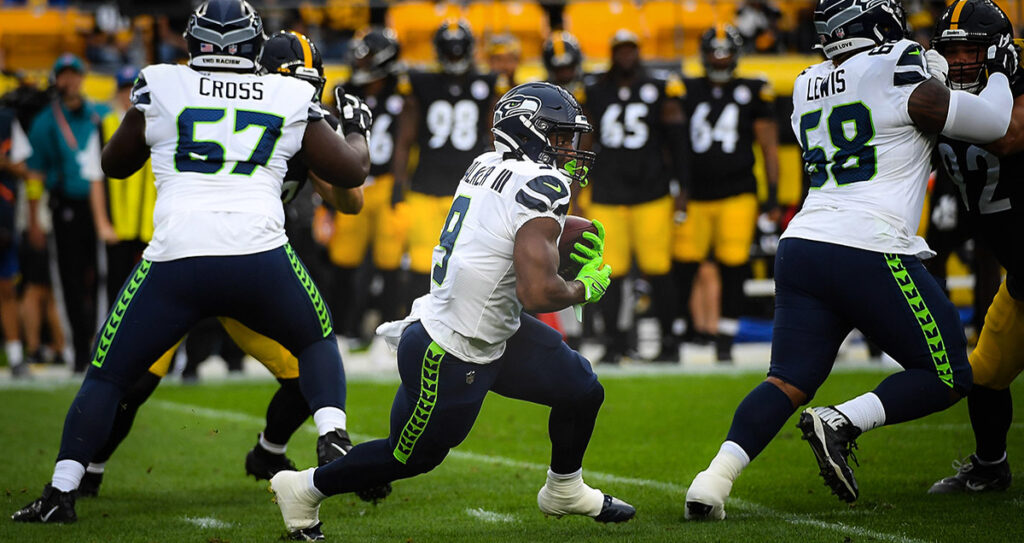 Kenneth Walker's week 6 salary may be the cheapest we get him on DraftKings for the remainder of this season.

How is it week 6 already? I don’t know about anyone else, but this season is flying by far too quickly. At this point of the season, we’re starting to see who the league contenders are, and who will be vying for the number 1 draft spot come April. From a DFS standpoint, we’ve started to see a few trends as well, in terms of what players are shining, and where true values lie.

With that in mind, let’s look at this week’s DraftKings Millionaire slate, and win you some money! In case you missed it, we published our FanDuel week 6 picks earlier in the week, and have picks for PrizePicks and Underdog published as well.

One of the best NFL games in recent memory was Chiefs-Bills in the playoffs in the 2021 season. Now, we get a rematch of a game that, the last time they played, totaled 62 points. This rematch is looking to be another high-scoring game, and Josh Allen will be looking to throw, and throw often in this game. Allen has thrown for 330 yards/per game this season and averaged 29.3 fantasy points per game as well. Look for Allen to have a high-ceiling game this week.

It’s officially Kenneth Walker season in Seattle. With the unfortunate departure of teammate Rashaad Penny due to injury, Walker looks to get a large piece of the pie in terms of the rushing attack in Seattle this week. They play Arizona, who have given up 114 rushing yards per game, at a rate of 4.3 yards per carry. Walker should have a monster week this week, and this might be the least expensive he will be for the rest of the season. Buy the dip while you still can.

Jeff Wilson Jr. is an incredibly talented athlete when healthy. Against a less-than-stellar Atlanta defense, he’s due for another huge game after his 23.2-point game in week 5. Because the 49ers aren’t throwing the ball very much, Wilson will be given every opportunity to run all over the Falcons. He’s the guy in that offense, and coach Kyle Shanahan will be calling Wilson’s number all day.

Mike Evans is DUE. After uncharacteristic performances in weeks 2 and 5 (9.1 and 12.1 points, respectively), Evans is bound to have another breakout performance this week. The Buccaneers desperately need a win against a decimated Steelers defense, and Tom Brady should be targeting Evans to get the job done.

Gabe Davis had a ridiculous stat line in week 5: 3/171/2 for 35.1 fantasy points. He looked like Randy Moss out there! While Davis doesn’t have a floor of 35.1 points, he certainly has a ton of upside this week in a matchup with Kansas City that’s bound to be a shootout. The Allen-Davis stack has the potential to be a lethal duo this week.

Like the analysis of Kenneth Walker, Alec Pierce will not be this inexpensive in the further. He’s a player who has a great fantasy floor, and from a DFS perspective, his matchup against the Jaguars couldn’t be better. He’s coming off of a 16-point performance against the Broncos and will look to expand upon that with this week’s matchup as well.

If there was any week for Robert Tonyan to have a blow-up week, it’s this week against the Jets. The Jets have given up 23.6 points per game this year, and the Packers are due for a huge scoring game. Rodgers has shown to trust Tonyan, and I wouldn’t be surprised if he scored 1-2 touchdowns this week as a result.

Tyler Boyd and Joe Burrow keep growing their connection. With Ja’maar Chase and Tee Higgins drawing the lion’s share of the coverage, look for Boyd to have a boom game this week. At this discounted price, it’s almost too good to be true.

How are the Vikings this cheap this week? They are facing off against THIRD STRING Dolphins quarterback Skylar Thompson. Look for the Vikings defense to have a huge week against a Dolphins offense that is playing hurt, and without a sparkplug.

New to DraftKings? Sign up using our DraftKings promo code (DFSBV1) and get a free entry into the NFL Week 6 Millionaire contest!