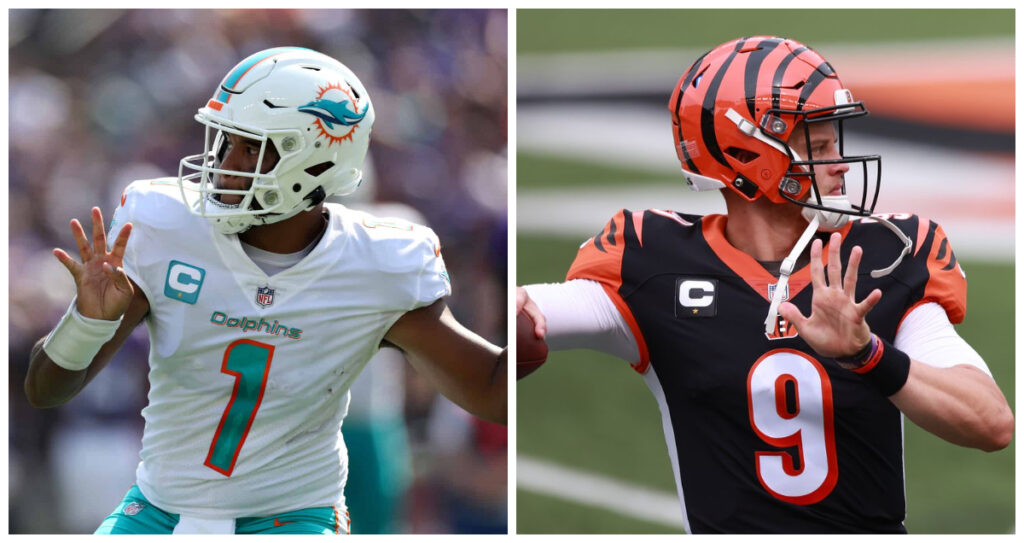 We went 1-1 last Thursday in a game that featured a wild finish. Trailing 23-17 with just seconds remaining, the Steelers tried to lateral their way to a miracle touchdown. Pittsburgh ended up going the wrong way and fumbled, which allowed Denzel Ward to recover it for the Browns for a touchdown of their own.

The crazy finish cost anyone on the teaser that featured the under or the Steelers a win. It did not factor into either of our plays but was still interesting nonetheless.

This Thursday we have the Cincinnati Bengals hosting the surprising (3-0) Miami Dolphins. It is unclear what the status of Tua Tagovailoa will be. He seemed to be suffering from a concussion after taking a big hit last week.

Somehow, he was cleared by Miami’s medical staff to return. As surprising as the 3-0 start for Miami has been, the same can be said about the Bengals starting 1-2. Many expected Burrow and the boys to start out hot after falling short in last year’s Super Bowl. Anyway, let's get to our best bets for Dolphins at Bengals, and be sure to review our best player prop bets for this TNF game.

Table of Contents hide
1. A Closer Look at Dolphins vs. Bengals
2. Best Bet: Dolphins +4
3. Best Bet: UNDER 47.5
4. Market Report and Betting Splits for Dolphins at Bengals

A Closer Look at Dolphins vs. Bengals

Miami is coming off the most impressive win of their 3-0 season. They held the Bills to just 19 points and played just well enough offensively to get the win. This was despite their starting QB, Tua, getting knocked out of the game for a brief period of time.

On paper, the Bills seemed to dominate the contest. They outgained the Dolphins 495 to 212 and held them to just 3 of 8 on 3rd down. Even time of possession was extremely lopsided, 40 minutes to just under 20.

However, the only thing that mattered was the final score. The Bills had their chance and got into field goal range late but Josh Allen and the offense could not get set in time to spike the ball for one final play.

After starting out a horrendous 0-2, the Bengals finally looked like the team most expected last week. Joe Burrow threw for 275 yards and 3 touchdowns while throwing no interceptions and getting sacked just twice.

Defensively, the Bengals got after Flacco. They sacked him 4 times and more importantly, forced 2 interceptions. They also forced and recovered 2 fumbles which helped lead the way to victory. The 27 -12 win was almost much closer as the Jets were driving in the final possession before Bates picked off Flacco at the 17-yard line to clinch the game.

This Miami team has found a way to win in 3 different ways already this season. In week 1, they held the Patriots to just 7 points in a dominant win. Next, they won a shootout against the Ravens and last week pulled off the unthinkable against Buffalo.

Cincinnati, on the other hand, has lost to two weak teams (Pittsburgh and Dallas) before beating an inferior Jets team. Home favorites between a field goal and touchdown are just 1-7 ATS this season and this game falls right into that trend.

Heavy money has come in on Cincinnati already and the line is shifting in the other direction in some books. Miami will cover and an outright win will certainly not be out of the question.

We mentioned in the matchup breakdown that the Dolphins have won in different fashions in all 3 games. The key against this Bengals team seems to be holding their offense in check.

The Dolphins have shown their ability to hold good offenses in check and are willing to trade points with higher-scoring offenses. We believe they will focus on shutting down Burrow and company here.

Over / Under Trends for Dolphins at Bengals:

Market Report and Betting Splits for Dolphins at Bengals

There's been quite a bit of line movement in this game. Cincinnati opened up as 1.5-point favorites and now they are sitting as 4-point favorites across the board. According to multiple sources, around 66% of tickets have come in on the Bengals so far.

There hasn't been nearly as much movement on the total. It opened at 48 points and is now sitting at 47. Around 68% of the tickets have been on the Over, so there's some reverse line movement to note (if you're into that sort of thing).

According to our live odds tool above, the best place to bet on the Dolphins is at Unibet since they are offering +4 at -106 odds. If you want to ride the Under with us, PointsBet is currently dealing the best price at 47 (-107).