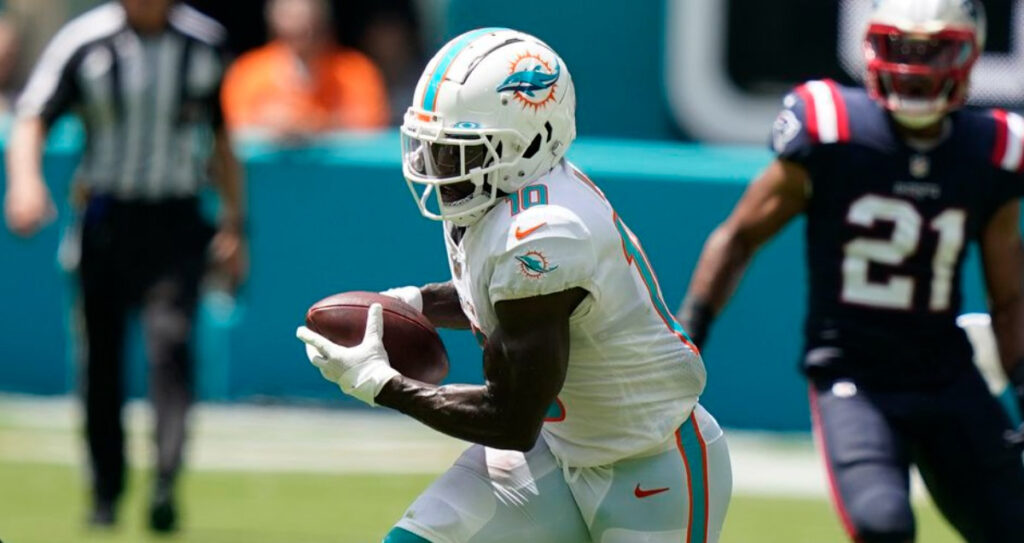 Tyreek Hill to score a touchdown at +140 odds is one of our 4 best prop bets for Thursday Night Football.

An ugly and painful 1-2 finish in our props last Thursday still stings. Our Over on Trubisky’s pass attempts of 32.5 lost with Trubisky finishing with 32 attempts on the nose!

This week, we have two of the best young quarterbacks facing off in a matchup of Tua vs Burrow. Jamar Chase and Tee Higgins are one of the best wideout duos in the league and Tyreek Hill and Jaylen Waddle may even be better.

The possibilities are endless in terms of high-scoring offenses in this one and the prop market is full of value. So, with that being said, here are our 5 best prop bets for Dolphins at Bengals. Be sure to review our TNF best bets as well to see how we are betting this game.

Tyreek had one of his quietest games last week against Buffalo. In the post-game interview, he mentioned that he was going to have some payback for Eli Apple.

We expect big things from Hill this Thursday when Miami invades Cincinnati. Taking him for a touchdown at this price is a no-brainer. There's a ton of value on this one!

We believe the key to this game for the Dolphins is going to be keeping the Bengals in check on offense. In both Bengals losses, they were held under this total and their biggest scoring game to date is 27.

Miami will likely play their bend but don’t break style that was successful last week against the Bills and will hold the Bengals under 25 points this Thursday.

Burrow has gone over this number in 2 of his 3 games so far this season. He is currently averaging 270 yards per game this season which is 18 yards below his season average from last year.

The Cowboys were the only team to hold Burrow under this total and they lead the league in sacks. Here against Miami, the Dolphins have just 6 sacks on the season and will not get to him enough to cause him issues in reaching this total.

Boyd exploded last week for 105 yards on 4 receptions. The longest one going for 56 yards. In week 1, his longest reception came to 22 yards.

Against the Cowboys, where Burrow struggled, Boyd was only able to reach 16 yards on his longest reception. He is a deep threat that we are expecting to connect with Burrow once again here for a 20+ yard reception.

Gulp! Here's a scary one to hit submit on, especially against the putrid Miami secondary. Nevertheless, our numbers show that there is value on the Under in this spot. Burrow has already gone under this number of completions in two out of the first three games this season.

For his career (including playoff games), Burrow has stayed Under this number of completions in 19 of 33 games. We are expecting the former Heisman Trophy winner to hook up with his old buddy Ja'Marr Chase on a few deep passes in this game. If that happens, Cincy's drives will be shorter and Burrow won't have as many opportunities for completions.

The Bengals have also got to find a way to get their running game going. If they get any type of a lead late, they'll try to salt the game away by handing the ball off to Joe Mixon as many times as they can. Take the Under!