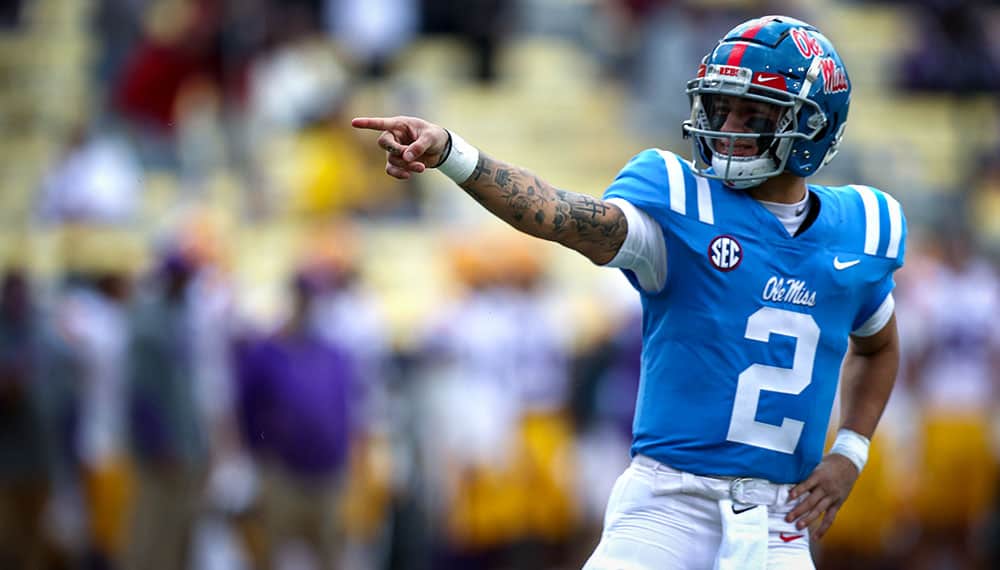 Week 6 in college football had plenty of high-profile matchups and shocking upsets. Though the Week 7 slate isn’t as packed with many Top 25 matchups, there are plenty of games that offer profit opportunities for sports bettors. Here are our three best bets for Week 7 along with the live points spreads and totals from our free odds shopping tool.

PointsBet is offering all new players an instant $200 bonus with any $20 NFL or CFB wager this week. Here is how to lock in your $200 bonus:

#11 Kentucky is getting zero respect from the oddsmakers in this one. While we believe that Georgia should indeed be the heavy favorite, our power ratings make this line at Georgia -16. That’s a ton of value, at least according to our numbers.

Kentucky is playing with a ton of confidence right now after knocking off both LSU and Florida in back-to-back weeks. This Wildcats team is unlikely to be intimidated, even on the road against the #1 team in the country. We think that Kentucky can stay within striking distance of Georgia for the majority of the game.

Junior QB Will Levis has racked up 1,134 passing yards and 11 TDs while also finding the endzone three times on the ground. The only concern with Levis is that he’s thrown six INTs and this Bulldogs defense is great at forcing turnovers. RB Chris Rodriguez Jr. leads the Wildcats in rushing with 759 yards and 5 TDs. Look for Stoops to give Rodriguez plenty of carries, even against this elite Georgia front seven.

One interesting nugget is that Kentucky’s offense is ranked slightly higher than Georgia’s offense, at least on a yards per play basis (6.6 vs. 6.5). With a point spread this large (+23.5) and a points total this low (44.5) if the Wildcats can score a couple of touchdowns, they’ll have a great shot of covering the number. Levis will be looking to hook up on some deep passes with Wan’Dale Robinson, who has 527 receiving yards and 4 TDs this year.

Sure, Georgia’s defense is by far the best in the country, but this Kentucky defense is pretty stout in its own right. They’re only allowing 16.4 points per game (11th in the country) and 4.3 yards per play (12th in the nation). Take the generous amount of points with the Wildcats. Go Blue!

Though Texas has a little more overall talent, this is the ideal spot to back the Pokes! Did you see that epic meltdown by this Longhorns defense last week against Oklahoma in the Red River Showdown? That’s not something that the Texas players will be able to get out of their heads quickly.

This means that the Horns may get off to a sluggish start on both sides of the football. Our power ratings say that Texas should only be favored by around a field goal so there’s a little value with the Cowboys. Don’t forget that Mike Gundy’s squad is a perfect 5-0 on the season.

Though the Longhorns have the much better offense, the Cowboys have the far superior defense in this matchup. This Pokes defense is one of the best in the nation at stopping the run, as they’re allowing only 2.8 yards per rush. They are a bit mediocre against the pass (ranked 47th in yards per pass) so that is an area of concern.

We expect Texas to come out in a bit of fog after losing to their archrival in heartbreaking fashion last week. Oklahoma State should be able to build a lead in the first half before Texas shakes out of their Red River coma. Give us the much better defense and the +5.5 points. Go Pokes!

This game may not be a Top 25 matchup, but there will be plenty of fireworks in this one. There is no love lost between Lane Kiffin and Tennessee fans. Kiffin only coached in Knoxville for one season before bolting for the USC job. Needless to say, folks from the Volunteer State have not forgotten that.

One area that Ole Miss should be able to exploit is the poor pass protection of the Vols offensive line. The Vols allow a sack on over 12% of their downs so QB Hendon Hooker could be running for his life on several occasions. The Vols will have a hard time stopping linebacker Sam Williams, who already has five sacks for Ole Miss this year.

Tennessee’s defense has improved quite a bit over last year’s squad. However, we don’t see how they’ll be able to contain Matt Corral and Lane Kiffin’s high octane offense. The Rebs are averaging 44.2 points per game (5th), 544.5 yards per game (2nd), and 7.1 yards per play (4th). The Vols defense has yet to face a team with this many offensive weapons.

This could be the signature win that new Vols coach Josh Heupel is looking for, but we just don’t see it happening. The Rebels have way too much offensive firepower and should be able to pull away late in this game, even in a hostile orange environment. Lay the small number! Best of luck!