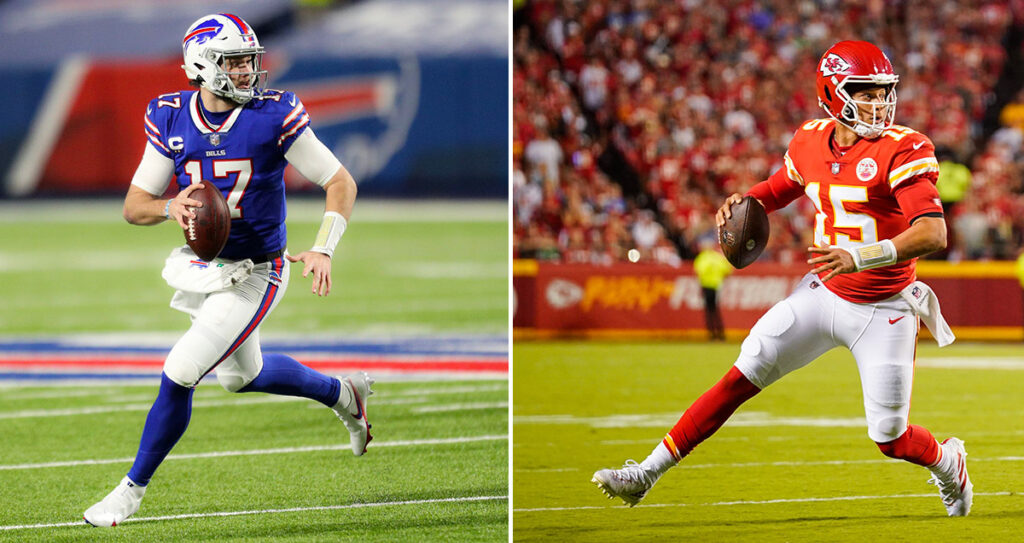 Mahomes and Allen should put on a show in week 6. We like the home dogs to cover.

Week 6 of the NFL season marks the start of byes, resulting in our first 11-game main slate of the season. That being said, Sunday's schedule is loaded with great matchups, headlined by the Bills at the Chiefs at 4:25 on CBS and the Cowboys at the Eagles in primetime on NBC.

Combine that with the best college football slate of the season, and this weekend should provide for an entertaining two days of football. Our team picked through the 1 o'clock and 4 o'clock games on the NFL week 6 schedule to identify the four best bets for the entire slate.

The Jaguars have 3 losses with just 2 wins sandwiched between them. They are coming off a terrible 13-6 loss to Houston at home. They put up 2 field goals in the 1st half where they went into the break tied. The 3rd quarter was uneventful with no scoring. With just 3 minutes to go in the game, Dameon Pierce broke a 20-yard run before punching it in to ultimately win the game. Trevor Lawrence had a rough game throwing 2 interceptions and finishing with a 54 QBR.

The Colts are 2-2-1 on the year after picking up a boring but productive win in Denver last Thursday night. The game was filled with punts and field goals as no one was able to find the endzone. The worst part for those watching the game was that it took overtime to decide the finish. Matt Ryan was just as bad as Lawrence was in his last game. Ryan threw 2 interceptions and a slightly better QBR of 60.1.

The Jaguars have a serious advantage here in terms of offensive ability. They are averaging over 22 points per game while the Colts have only managed 20+ points twice and are averaging just under 14. The rushing game of the Jags which now is including a good dose of Travis Etienne will be able to stabilize the offense and lead these Jags to a road win.

The Pats are now 2-3 after last week’s drubbing of the Detroit Lions last week 29-0. They held the Lions to just over 300 total yards of offense and 4 of 12 on 3rd downs. On top of that, the 6 times the Lions went for it on 4th down, they were stopped every time. The rushing game was what lifted the offense and almost all of it came from Rhamondre Stevenson, who finished with 161 yards on the ground. They are now holding opponents under 20 points per game and would be in much worse shape if it wasn’t for their defense playing at a high level.

The Browns are also 2-3 with their 2 wins coming against 2 of the worst teams in the league in Carolina and Pittsburgh. They are coming off a 30-28 loss to the Chargers where they led heading into the 4th quarter where they were unable to score. They are tops in the league in rushing as they average 192 yards per game. Nick Chubb and Kareem Hunt are continuing to just thrash defenses.

Jacoby Brissett has been making costly errors late in some of their losses but we don’t expect that to be the case here as the Browns' rushing attack should have this game well out of reach for the Patriots late in the game. As long as they can get up on them early, the Pats are just not built to come from behind right now.

The Bills are sitting at 4-1 with their loss to the Dolphins bookended by 2 wins before and after. They are coming off a 38-3 beat down of the Steelers at home last week. Josh Allen went for over 400 yards passing and 4 touchdowns and connected with Gabe Davis 3 times for 170 yards and 2 touchdowns. Kenny Pickett’s 1st start was a rough one where he found himself down 31-3 at the break. The Bills are currently #1 in the league in points allowed with just 12.2 per game. They are also 2nd in points scored per game with 30.4.

The Chiefs are also 4-1 but are coming off an ugly performance against the Raiders where they were lucky to sneak out a 30-29 win, Travis Kelce was unstoppable in the redzone where he grabbed 4 passes for touchdowns and just 25 yards. They had serious trouble stopping the run game of the Raiders. Josh Jacobs went for 154 yards on 21 carries.

The Chiefs' inability to stop the run is their biggest weakness. However, the Bills are more pass-heavy and rank 1st with 331 yards through the air per game. The Chiefs can match them there and will not have much to worry about in the running game this matchup. We are getting one of the best teams in the league as a home dog here so we could not pass that up.

Arizona played the still undefeated Eagles tough in a 20-17 home loss last weekend. Their defense was strong on 3rd down where they held the birds to just 6 of 13. They got to Jalen Hurts twice and prevented him from tossing any touchdowns. However, he did find the endzone twice on the ground. Marquise Brown and James Conner were producing well until Conner went out with an injury. The Cardinals had a chance to send the game to overtime with a Matt Ammendola 43-yard field goal that he missed.

Arizona has had all their losses come to respectable teams. The Chiefs, Rams, and Eagles are all potential playoff teams this season. James Conner is still dealing with the rib injury and his status is uncertain. We believe the tough loss to the Eagles is going to cause a hangover effect in this game and Seattle will take advantage of it at home.