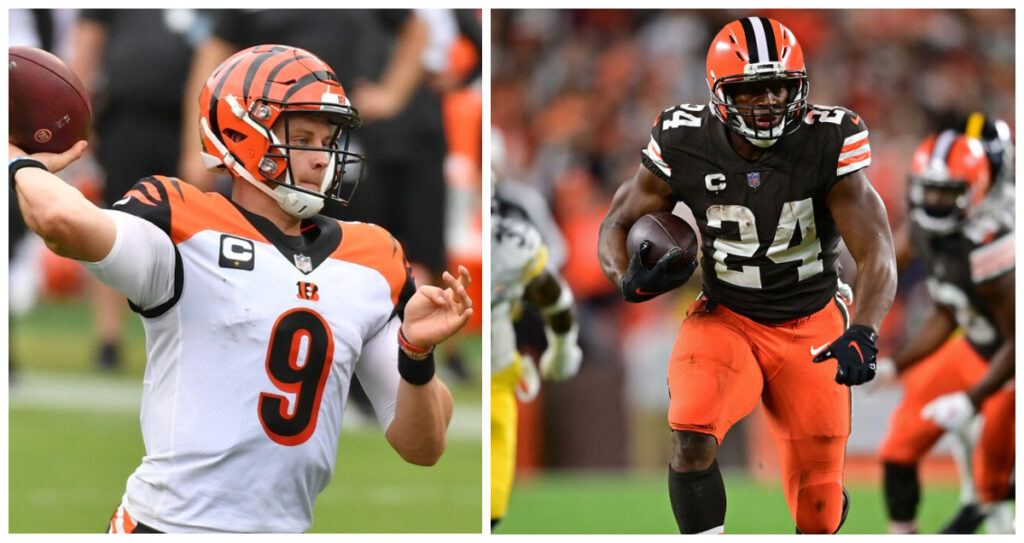 Joe Burrow and the Bengals will try to outscore Nick Chubb and the Browns on Monday Night Football.

A pair of NFC North rivals will do battle on Monday Night Football to wrap up Week 8. Can the Bengals offense stay on track even without star wideout Ja'Marr Chase? Or will the Browns finally put it all together and get their first win in October?

We found 2 best bets for this Bengals at Browns matchup to hopefully keep building up our betting bankroll. Best of luck with all your Monday Night Football action!

The 4-3 Bengals have begun to look more like the Bengals that made their Super Bowl run last year instead of the Bengals that began this season at 0-2. Since those 2 losses, Cincy has gone 4-1 with their only loss coming on the road to a good Baltimore team 19-17.

They are coming off a 35-17 manhandling of the Falcons at home last week. Joe Burrow threw for over 480 yards and 3 touchdowns while not throwing an interception.

Tyler Boyd and Jamarr Chase combined for 16 catches, 285 yards, and all 3 touchdowns. They are now 3rd in the league in passing offense with 302 yards per game and 6th in the league in holding teams under 19 points per game.

Cleveland suffered their 4th straight loss last week. Their only 2 wins on the year have come against Carolina and Pittsburgh, who are a combined 2-10 on the year.

The Browns trailed by just 3 at the half but were never able to get any closer. They did hold Lamar Jackson to just 94 yards passing but went just 2 of 11 on third down.

Cleveland has continued to lean on their run game all season. They are 4th in the league averaging 163.6 yards per game on the ground. Nick Chubb and Kareem Hunt have been the main weapons in the run game and have combined for 12 of the team’s 18 touchdowns.

The Bengals are rolling in a positive direction although they will be without the services of their top playmaker Jamarr Chase. He is sidelined with an injury that will keep him out of action for a number of weeks.

That said, the Bengals are still sitting as a field-goal favorite here. We believe Joe Mixon and Tyler Boyd will be enough for Joe Burrow to defeat the Browns here on the road. The Browns are a complete mess and we don't see them turning things around in this one.

Cleveland is allowing over 26 points per game. We believe this Bengals offense, even without Chase, is good enough to score over the average allowed by this Browns team.

The Bengals' defense will also have their hands full with the rushing attack of the Browns. This Bengals team is in the bottom half of the league in rush defense and Cleveland is tops in the league rushing the ball. We believe we will see some big plays in this matchup that will lead to some quick points.