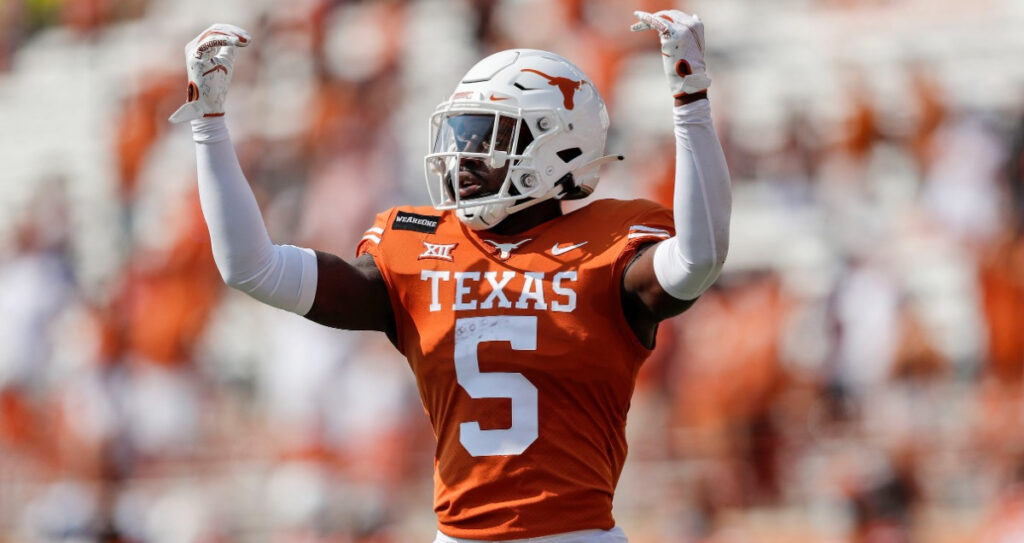 Our favorite college football player prop bet for Week 12 is on Bijan Robinson to go Over his rushing yardage total.

Two Top 25 matchups this week highlight the schedule with both taking place between revived PAC 12 conference members. A battle for Los Angeles featuring cross-town rivals No. 7 USC and No. 16 UCLA kicks off the primetime schedule before No. 10 Utah travels to No. 12 Oregon late Saturday night. Both games have huge implications for the PAC 12 Championship game to decide which teams advance there in two weeks.

If you haven’t already locked in your picks, here are four of the top college football player props for this week on FanDuel. If you are new to FanDuel, be sure to check out their $1,000 “No Sweat First Bet” bonus offer!

After an injury during the second game ended starting QB Tyler Buchner’s season, No. 18 Notre Dame turned to sophomore Drew Pyne to lead the Fighting Irish, as the team will for this weekend’s road contest against Boston College.

In his starting role, Pyne has been more than sufficient, winning seven of eight games for Notre Dame. While Pyne has completed 63% of his passes for 1,574 yards and 18 TDs, the QB is hit-or-miss to reach the 180-yard passing plateau. Only in four of his eight games has Pyne accumulated that amount thanks to the Fighting Irish preferring to run the ball.

Boston College has held three straight passers under the 180-yard threshold. In those last three games, the Eagles' defense has yielded over 150 yards on the ground, however, which would play right into the Notre Dame game plan. Despite these statistics, expect Pyne to eclipse the 200-yard mark on the day as Boston College will stack the box against the Fighting Irish.

A pair of 6-4 teams take the field Saturday in Lawrence, Kansas when the Texas Longhorns look for revenge against the Kansas Jayhawks Saturday afternoon. Last season, Kansas snapped a 56-game road losing streak by upsetting Texas 57-56 in OT to notch only its second win this century against the Longhorns.

Texas relies on the ground game and Bijan Robinson in particular. The junior RB has amassed 1,158 yards on the ground and 12 rushing TDs in 2022, averaging more than 115 yards per game. Robinson is also a threat in the passing game, snagging 19 catches for 314 yards and two TDs.

The Kansas defense has struggled at times against the rush. In the last three losses, the Jayhawks surrendered at least 264 yards on the ground. Expect Robinson to drive the Longhorns down the field using his feet to comfortably collect this rushing total by the game’s end.

When the USC Trojans head to the Rose Bowl Saturday night to face the UCLA Bruins, the matchup will feature two of college football's most potent offenses. Fans attending the game will see those offenses light up the L.A. sky with their fireworks during this primetime game.

Much of the attention this week will be on a pair of dynamic USC WRs in Biletnikoff winner Jordan Addison and Mario Williams, who is expected to return from a previous injury. While UCLA will have their hands full with these two receivers, look for unheralded WR Tahj Washington to sneak past the Bruins defense to score a touchdown for the Trojans.

This pick has underdog status, but Washington has proven he merits the risk. In his previous three games – and while Williams was out – the junior from Marshall, Texas has hauled in 16 catches for 296 yards and four TDs.

Those four TDs were the first of the year for Washington. With Williams returning from a four-game absence and the Bruins locked in on Jordan Addison, expect Washington to find the endzone yet again for USC.

Both the Oregon Ducks and Utah Utes can position themselves for a spot in the PAC 12 Championship game with a victory Saturday night in Eugene. Should Utah win this game, the Utes will do so behind the steady hands of QB Cameron Rising.

Rising is lethal through the air, tossing for 2,225 yards and 19 TDs thus far. Yet his legs are just as important. In the last seven games, Rising has rushed for 27 or more yards in all but one game, a 45-20 victory over Arizona. Included in that number is a trio of performances that met or topped the 60-yard mark.

Oregon defends the rush extremely well, holding opponents to under 110 yards per game. Still, in their past two games against mobile QBs, the Ducks have allowed the signal caller to pick up 58 yards rushing total in games against UCLA and Washington. Expect Rising to easily rush for more than 23 yards against the Ducks.