Tennessee vs Pittsburgh - Betting Preview and Our Best Bet 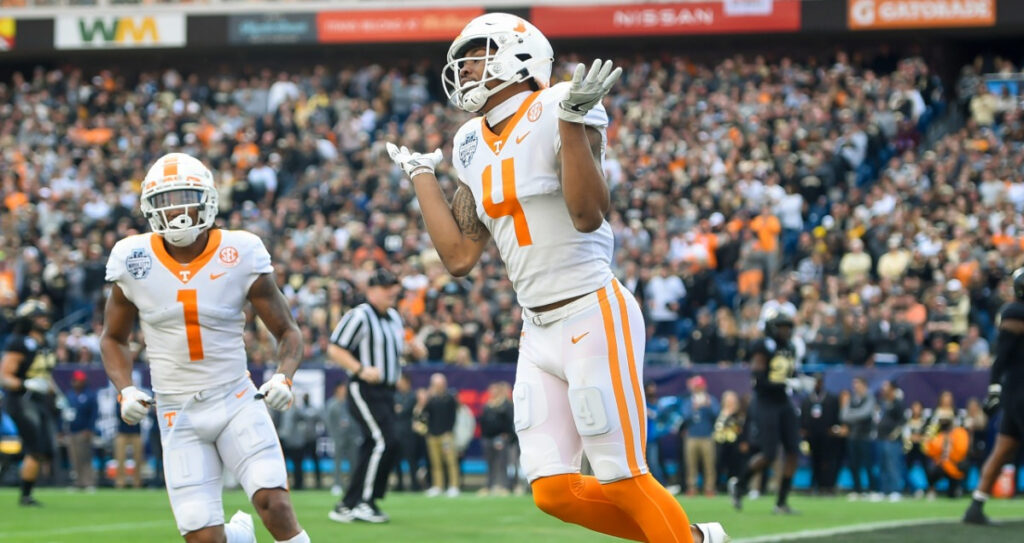 Cedric Tillman will try to help Tennessee get some revenge against Pittsburgh.

Last year, the Pittsburgh Panthers and Tennessee Volunteers had one of college football’s finest early-season showdowns. Trailing 41-34, Pitt stopped Tennessee’s final drive with a goal-line stand, holding on for a road victory over the SEC school.

The rematch in Pittsburgh holds more weight this season. Tennessee rebounded from that loss to record a 7-6 record and is expected to be competitive in the SEC East under second-year coach Josh Heupel. The Panthers, meanwhile, are among the best in the ACC and look to repeat as champions of the league.

Winning this game could springboard both teams closer to their goals this year. Will the Volunteers sing Rocky Top in the Steel City, or can the Panthers defend their home turf?

What to Expect from Tennessee Offense vs Pittsburgh

In 2021, Pitt knocked starting Tennessee QB Joe Milton out of the game. After the injury, Tennessee stuck with Hendon Hooker for the final 11 games, and he's the starter now for the Volunteers. In the season-opening win over Ball State, Hooker went 18-for-25 with 221 yards and 2 TDs along with two rushing TDs in less than three-quarters of work.

The running backs were also impressive. Sophomore starter Jaylen Wright rushed for 88 yards and a score on 13 carries while Jabari Small tallied 75 yards and a TD on 14 touches. The experienced offensive line - who returned four of five starters - led the charge as the Volunteers accounted for 569 yards of offense against Ball State.

What to Expect from Pittsburgh Defense vs Tennessee

The linebacker corps is legitimate. Upperclassmen Bangally Kamara and Sirvocea Dennis totaled 15 tackles, two passes deflected, and one sack. The linebacker unit made WVU’s QB uncomfortable all night and forced JT Daniels into making throws sooner due to their pressure.

What to Expect from Pittsburgh Offense vs Tennessee

Kedon Slovis was more than efficient in his Pitt debut against WVU. The USC transfer QB guided the Panthers to nearly 390 yards of offense, including 308 yards in a 16-of-24 performance. Fellow transfer Konata Mumpfield (Akron) was his primary target, garnering five catches and 71 yards on the night.

The Panthers also relied on Rodney Hammond to lead the rushing attack. Hammond obliged with 16 carries for 74 yards and two TDs to lead Pittsburgh’s running backs. Beyond Hammond, Pitt had no rushing attack as 22 carries from the remainder of the Panthers roster combined for two total yards.

What to Expect from Tennessee Defense vs Pittsburgh

A much-improved defensive backfield. Warren Burrell and Christian Charles finished with eight tackles on the day, giving the Volunteers a pair of competent tacklers coming out of their back four. Tennessee also picked off Ball State’s John Paddock twice on the day with Tamarion McDonald and Kamal Hadden each recording an interception.

The defensive line made life miserable for Paddock throughout the day. As a unit, the Volunteers were able to create pressure, helping the linebackers to record seven quarterback hurries.

While both Tennessee and Pittsburgh have improved defensively over last year in multiple facets, this should be a high-scoring contest. Last year, the two teams combined for 75 points in a regulation game, and this time should be no different. Expect both the Volunteer and Panther offenses to have spectacular games in this shootout.