Syracuse vs Clemson - Betting Preview and Our Best Bet 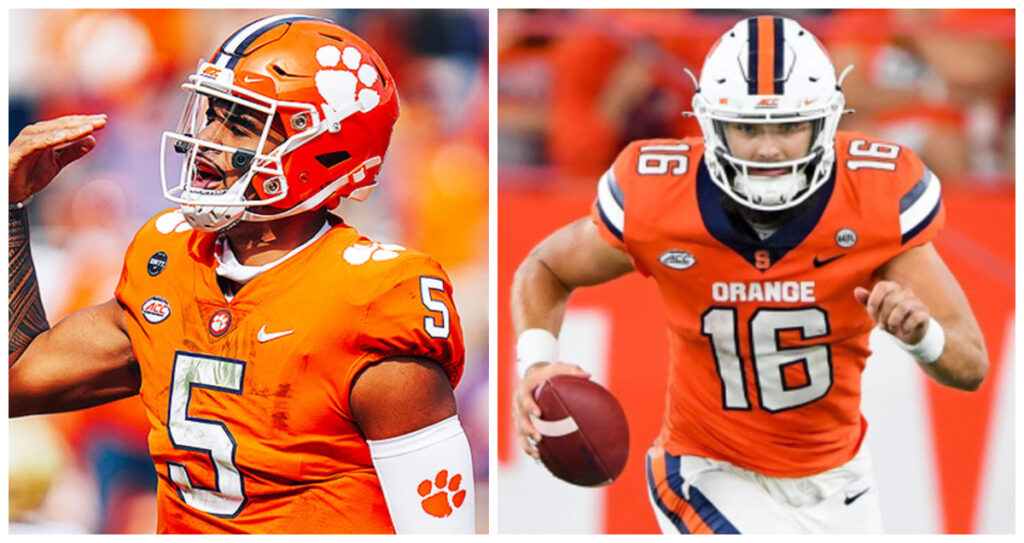 DJ Uiagalelei faces off against Garrett Shrader in this weekend's epic ACC battle between Clemson and Syracuse.

Anyone who circled the Clemson Tigers home contest against the Syracuse Orange as a battle of two undefeated teams to start the season is either insanely optimistic or just plain insane.

It’s no surprise Clemson - ranked No. 5 after their 7-0 start - is in this position. The Tigers finished 10-3 last year and returned a boatload of talent in 2022.

Syracuse, however, is surprising. The Orange are ranked No. 14 and have played extremely well, notching wins against NC State, Louisville, and Purdue on their way to a 6-0 start, or one more win than their 2021 total.

Clemson has already survived contests against Wake Forest, Florida State, and NC State. In the Tigers' last regular season contest against a ranked opponent, will the perennial ACC title contender pass their final test? Or will Syracuse upend Clemson and continue the Orange’s improbable run toward the conference championship game?

What to Expect: Syracuse Offense vs Clemson

Junior QB Garrett Shrader has been phenomenal for the Orange this season. As a passer, Shrader is completing nearly 70 percent of his throws, averaging 239 yards per contest with 12 TDs to only three interceptions.

His feet are lethal as well. Shrader is the Orange’s second-leading rusher, adding 300 yards on 78 carries with 5 TDs. Shrader trails Syracuse’s lead RB in that category as Sean Tucker (124 carries, 644 yards, 6 TDs) has come close to or topped 100 yards in all but two contests.

Shrader’s top target this season is WR Oronde Gadsden II. The sophomore receiver has caught 31 passes for 507 yards and five TDs. Tucker comes in second for Syracuse, nabbing 23 balls for 198 yards and a score.

What to Expect: Clemson Defense vs Syracuse

The Tigers are among the nation’s best rushing defenses, allowing only 82 yards each outing. That total is good for fourth nationally as Clemson has only allowed three rushing TDs this season.

While their passing defense is ranked lower, much of that lies with the Tigers forcing opponents to throw late in the contest due to holding large leads. The defensive line is doing its job, however, to make opposing QBs miserable.

DL Myles Murphy leads the team with five sacks while fellow linemen Tyler Davis and Ruke Orhorhoro both have a pair of sacks to add to Clemson’s total.

What to Expect: Clemson Offense vs Syracuse

Clemson’s DJ Uiagalelei has returned to form in 2022, shaking off criticism about last year’s shaky performance. The junior QB has passed for 1,665 yards in seven games, tossing 17 TDs against two interceptions.

Seven different receivers have caught 10 or more passes this season for the Tigers, showcasing their depth at the position. Freshman WR Antonio Williams leads all receivers with 24 receptions for 334 yards and two scores.

Star RB Will Shipley has led the charge for the rushing attack. Shipley leads Clemson with 567 yards off 96 carries, adding eight TDs. Uiagalelei has added 337 rushing yards to the Tigers' totals, ranking second on the team.

What to Expect: Syracuse Defense vs Clemson

Syracuse’s most dramatic turnaround from last season is on the defensive end. The Orange are holding teams to less than 14 points per outing, ranking sixth in the country.

The team also ranks in the top 12 nationally in both passing and rushing yards allowed, a statistic bolstered by games against Wagner and UConn earlier this season.

The linebacker corps is to thank for some of this increased productivity. Junior LB Mikel Jones is leading the team with 40 tackles while Marlowe Wax is second with 38 tackles. Combined, the duo has 5.5 sacks, roughly one-third of the Orange’s total of 17 sacks this year.

The Orange have played all but one game at home, contributing to their 5-1 ATS record. Nearly 63 percent of the public bets have been placed on Syracuse to cover again, and the 13.5 number is enticing for both sides.

Clemson, however, is on a mission and needs to make one final statement to the NCAA Playoff Committee in this contest. Expect the Tigers to soundly defeat the Orange in Death Valley on Saturday.