SMU at UCF: How to Bet Tonight's Spread and Total 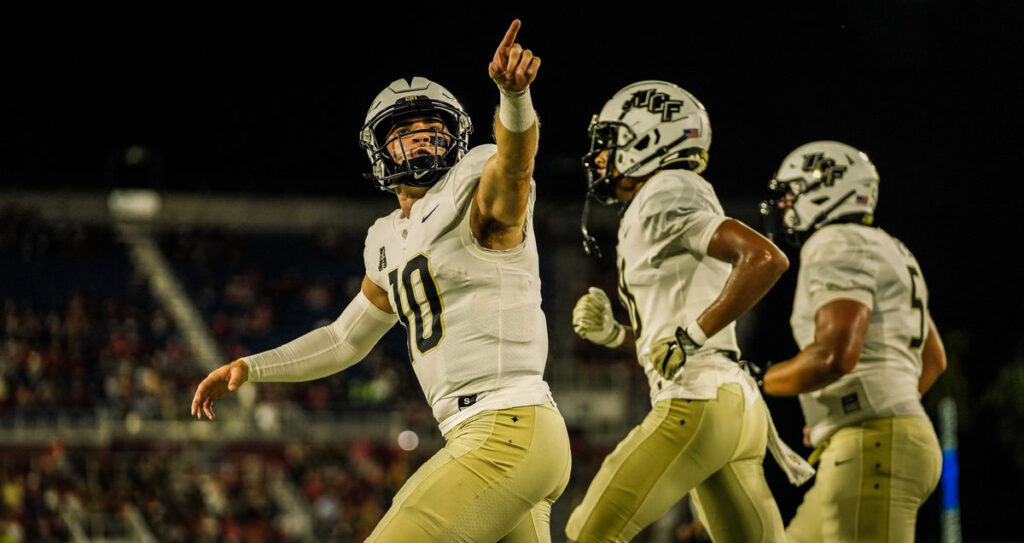 We like UCF and the under in tonight's AAC showdown.

What a treat for us college football fans. We typically have a lull in the action during the week until Thursday night but this week, we get a Wednesday night game. We can thank Hurricane Ian for this mid-week game as this was originally scheduled to be play Saturday. UFC is a short home favorite and the total indicates that the game will be played in the mid-60s. We will give you our best bets below for both the spread and the total.

SMU is 2-2 through 4 games this season. They started out 2-0 after defeating North Texas on the road in the opener and followed that with a win over Lamar. They since lost on the road to Maryland by 7 and then last week to TCU by 8. Tanner Mordecai has been a stabilizing force for the offense. He has led them to an average of 353 yards per game through the air. That has also helped boost their 3rd down conversion rate to 51.5% which is 19th in the country. While that has helped them average 38.5 points per game, their defense has allowed an average of 25.5.

UCF is off to a nice 3-1 start and is coming off a 27-10 win against Georgie Tech. Their lone loss came to Louisville at home 20-14 in week 2. The run game has been off the charts for the Knights. John Rhys Plumlee not only does it through the air, he leads the team with 390 rushing yards. As a team, they are averaging 274.5 yards per game which ranks them 6th in the country.

While both teams have a healthy scoring average, it is UCF that has the advantage on defense. They are holding opponents to just 13.5 points per game on the season. Louisville is averaging 26.4 points per game and were held to 20 by UCF. They also just held GT to 10 points when they were averaging 22.5 per game going into the matchup. We expect the Knights to hold Tanner Mordecai and the SMU offense in check here and get the win and cover.

As we stated in our play on the Knight for the spread, we believe it is going to be the defense that is the difference. In their previous 4 matchups at UCF, the total is 2-2 but this number is just a bit too inflated here. SMU will struggle to get north of 24 points in this one and will keep the total under our number here.