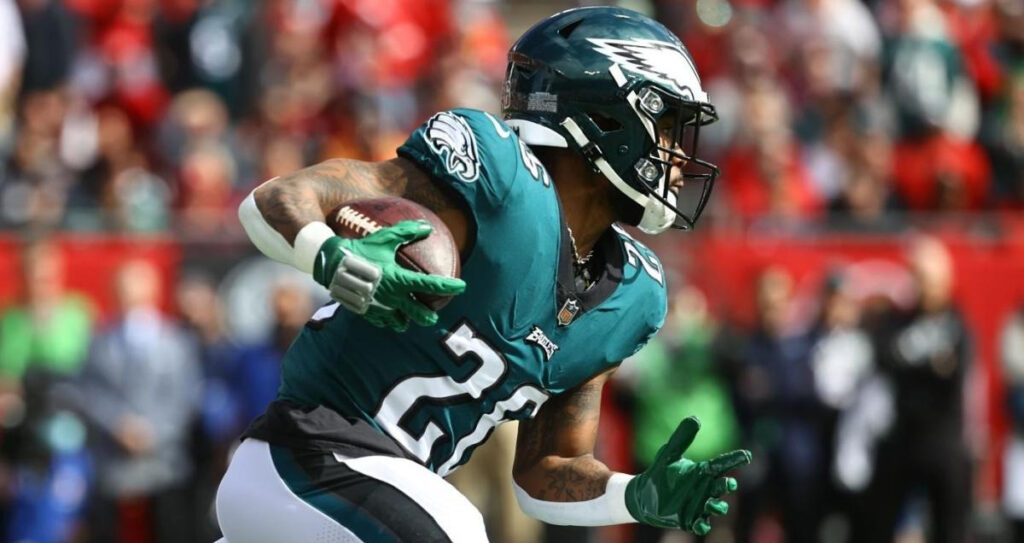 We like Miles Sanders to go Over his rushing yardage as one of our top PrizePicks and Underdog props for NFL Week 5.

Happy Tuesday everybody! After an awful 0-4 Sunday, our NFL player prop bets bounced back with a 3-0 sweep on Monday Night Football. That brings the yearly mark to 20-8, which is a fantastic start.

We'll try to keep that positive momentum going this week. The key is staying diligent in defeat but humble in victory. Check out our PrizePicks and Underdog props picks for NFL Week 5.

If you're not familiar with PrizePicks or Underdog, they are two of the top DFS sites on the planet. Both offer excellent payouts and access to early player prop numbers for the upcoming week. Here are a couple of the top bonus offers for these two sites:

In case you haven't noticed, this Eagles' offensive line is really good. Heck, they're probably the best in the league. We cashed a ticket a few weeks ago with Sanders on Monday Night Football and are more than happy to jump onboard this Over at such a reasonable price.

While Sanders does share some carries with Boston Scott and Kenneth Gainwell, he's still the feature back. Last week, Sanders was on the field for 67% of Philadelphia's snaps and we expect him to get the lion's share of the carries once again this week.

Sanders has gone over this rushing yardage in six of his last nine games. The former Penn State standout is averaging 89 yards per game this season, which points to an Over. Arizona's run defense is actually pretty good, but if Philly gets a big lead (which they could) they'll be pounding the rock at a high rate.

Man, we must be gluttons for punishment! C-MAC busted our Under a few weeks back but we are signing up for it once again. Nevertheless, we love betting on this San Francisco defense to stop the run.

The whole world just saw on Monday Night Football just how dominant this Niners defense can be. They only allow 2.9 yards per carry (1st) and 73.3 rushing yards per game (2nd). Those two numbers alone tell us that it could be a long day at the office for McCaffrey.

Since they're facing such a stingy run defense, the Panthers will use McCaffrey more in the passing game. We saw Carolina do this last week against Arizona when McCaffrey only got 8 carries for 27 yards but ended up with 9 receptions for 81 yards. We'll roll the dice and bet that the game plan is the same against San Fran!

Here's another hold your breath type of Under! Cousins has played well so far this season, as he's gone over this yardage total in three out of four games. So why in the world are we playing the Under?

Believe it or not, this Bears defense isn't too shabby against the pass. They rank 16th in yards per pass allowed and 4th in passing yards allowed per game. Chicago has a decent enough secondary to slow down Justin Jefferson and Adam Thielen.

The Bears are horrid against the run, so look for Minnesota to give Dalvin Cook and Alexander Mattison plenty of carries. As seven-point favorites, the Vikings may simply be trying to milk the clock during the latter stages of this game. That would make it more difficult for Cousins to exceed this amount of passing yards.

This is probably our favorite Under of the week. Pierce had a fabulous game against the Chargers last week but we think he comes back down to earth a bit against the Jags. The former Florida Gator has been one of the few bright spots on this Texans offense but Jacksonville is just too good up front on the defensive line.

The Jags do a great job of stopping the run. They rank 5th in yards per rush allowed (3.6) and 8th rushing yards allowed per game (93.8). Sure, Jacksonville had a rough game against Philly but that's to be expected against that vaunted O-Line.

Houston only averages 21 rushing attempts per game, which ranks 29th in the league. Pierce may not get enough carries to get Over this total, especially if the Texans fall behind early. We'll bet that DaVon Hamilton, Josh Allen, and Travon Walker give Pierce a hard time on Sunday!

Best of luck with all your NFL Week 5 props! Let's put this week in the win column!