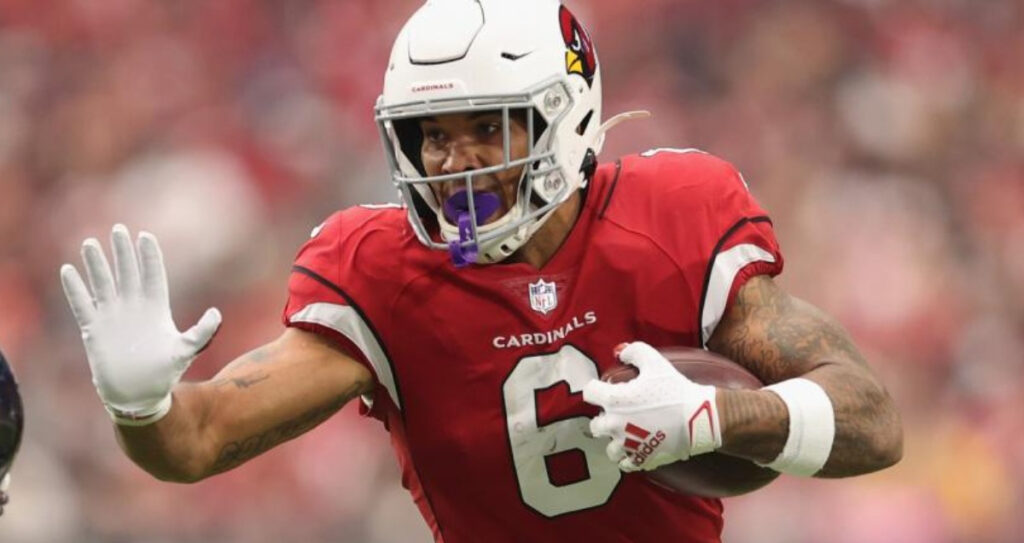 We like James Connor to go Over 57.5 rushing yards on Monday Night Football.

Ready to win BIG on Monday Night Football? We got you covered! We swept the board yesterday with a 3-0 mark and are looking to stay hot with our NFL player props!

Baltimore's stifling run defense easily held Najee Harris Under 63.5 rushing yards. The Titans stunk up the joint against the Jags, but thankfully they held Travis Etienne Under 56.5 rushing yards. Jared Goff torched the Vikings for 330 yards to sail Over his passing yardage total of 250.5.

Here are 3 PrizePicks props for Patriots at Cardinals. As usual, we recommend putting a half unit on the Power Play and a full unit on the Flex Play. We always want to make sure we turn a profit by going 2-1.

This is our favorite play on the Monday Night Football PrizePicks board. Five major US sportsbooks price this prop at a full yard higher. Sure, 1 yard may not sound like that big of a deal.

However, the math says otherwise. A quick run of the numbers tells us that we're getting 8.7% of value in Smith's Over. We especially love that DraftKings, one of the sharpest prop books in the industry, has this at 12.5 with the Over favored.

What else do we like about this play? Smith is averaging 18.2 receiving yards per game, which is obviously quite a bit more than this total of 11.5. Though Smith's production has been somewhat of a disappointment this season, all we need is for him to catch a medium-sized slant over the middle to cash this one.

This play is a little scary because the Pats doing a great job of stopping the run. That said, Conner has gone over this amount of yardage in 2 of his last 3 games. He should also have fresh legs coming off the bye week.

Conner has definitely had a down year so far, but he looked like his old self back in Week 12 against the Chargers. The former Pitt Panther rushed for 120 yards in that contest, so the burst is still there. Our numbers have Conner finishing with about 70 rushing yards, so we don't mind taking a shot with the Over.

You didn't think we'd make it 3 Overs, did you? Thornton has gone Under this yardage number in 6 of 8 games this season. He played pretty well against Buffalo but wasn't even targeted the week before against Minnesota.

In 5 of 8 games, Thorton has caught 1 pass or less. In New England's last 3 games, Thorton has played 39% or less of the snaps. The former Baylor Bear has a nice frame and plenty of speed, but you have to wonder just how much he'll be involved in tonight's game plan for the Pats.

We'll play Thorton to stay under this yardage number and hope that Mac Jones mainly targets Nelson Agholor and DeVante Parker in this one. Best of luck with all of your Monday Night Football action. Let's see if we can make it back-to-back 3-0 sweeps!