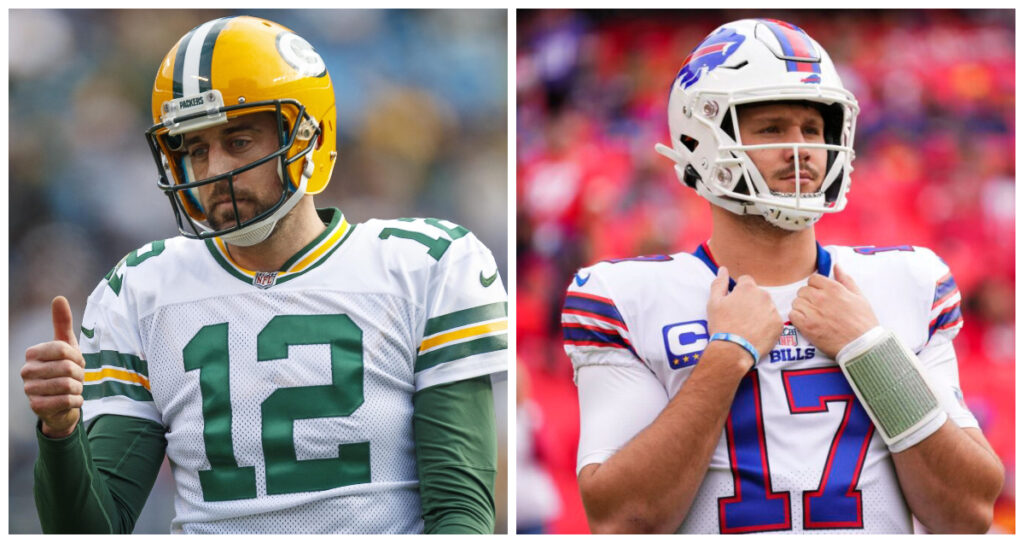 Aaron Rodgers will try to outduel Josh Allen as the Packers take on the Bills on Sunday Night Football.

What was originally going to be billed as a matchup of top-tier teams on Week 8’s edition of Sunday Night Football has turned into a lopsided game on paper with a double-digit spread. Buffalo hosts Green Bay as 11.5-point home favorites, wearing just their loss to the Dolphins as the only blemish on an otherwise dominant season.

The Packers, meanwhile, are 3-4 with their Week 14 bye nowhere in sight and sit 2.5 games back of Minnesota in the NFC North. The Bills are riding a three-game winning streak and are fresh off their bye in Week 7, giving them all the advantage and momentum in this primetime clash.

Last week’s SNF player prop best bets won yet again, finishing at 2-1 in a low-scoring Dolphins victory over the Steelers. Kenny Pickett threw 44 times and racked up 257 yards through the air to go over his total while Tyreek Hill snagged seven of his 13 targets to cash his receptions total.

Our lone miss was Chris Boswell’s field goal total which went under as he connected on his only attempt of the night. In the last five weeks, our player prop best bets are 11-6 and rolling with some serious momentum into Week 8’s game in Buffalo. Here are our 3 player prop bets for Packers at Bills.

Buffalo has allowed five passing touchdowns in six games, and the only time they allowed multiple scores through the air was against Patrick Mahomes in Arrowhead. Needless to say, this Bills secondary is pretty stingy.

Rodgers has struggled to find reliable connections with the pass catchers on his team in 2022. Three Packers players are in the top 20 players in the league with the most drops this season, and they still have a lot to figure out offensively. That likely will not work itself out on Sunday night in Buffalo.

After a slow start to his 2022 season, Knox has started to find his way back into the flow of the Bills’ offense. He’s averaging just under 36 yards per game over his last four to go with 18 targets and 14 receptions during that time.

Green Bay has allowed the third-least yards per catch to tight ends this season, and Knox doesn’t get more than three or four of those a game. We'll ride with the Under here!

Jones has been the much more effective runner for the Packers over the course of the season, rushing for 5.5 yards per carry compared with AJ Dillon’s 3.9 yard average with almost identical workloads. Between Weeks 2-5, Jones had 56 carries for 341 yards and a touchdown in a stretch where the Packers went 3-1.

Outside of that stretch, Jones has just 22 carries for 91 yards and Green Bay lost those three games. Jones will have to battle a negative game script and a front seven allowing an NFL-best 3.5 yards per carry to even get close to this number.