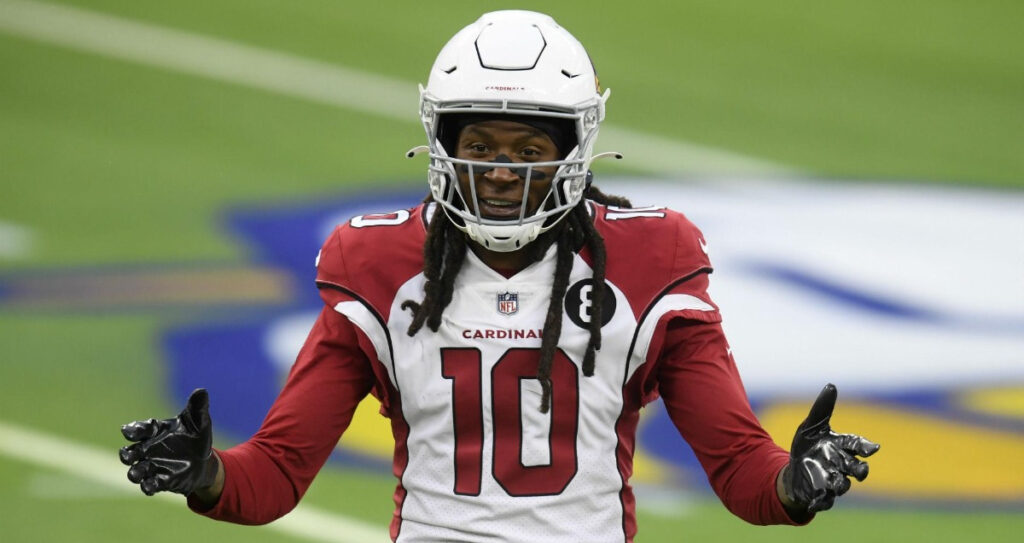 DeAndre Hopkins is one of the top wideouts in our DFS NFL Week 8 lineup.

Our NFL Sunday DFS lineup for Week 7 scored 107.22 points thanks in large part to everyone but our wide receivers. Ken Walker III’s continuation of his breakout rookie campaign led the way for our lineup with 28.8 points.

Nice contributions from Justin Herbert (18.62 points) and Dameon Pierce (13.7 points) brought us to the brink of being in the money. The receiver position continues to elude us in terms of DFS success, with the combination of Amon-Ra St. Brown, Allen Lazard, and Alec Pierce scoring just 14.6 points total.

Week 8 provides some more opportunities for us to adjust and improve our weaknesses. We look to do just that to cash in on FanDuel’s $1.4M NFL Sunday Million that awards $250k to the winner.

Mills just had his best game of the season against the Raiders in Week 7 off a bye, and he should carry that momentum over into a Week 8 matchup against the Tennessee Titans.

The Titans allow the 2nd-most fantasy points to opposing quarterbacks this season, and even an offense like Houston’s should be able to make gains through the air at home.

As long as we can get 15+ points from this position, we’ll be more than happy with that from Mills at this salary cap number.

Sanders gets an in-state matchup with Pittsburgh who has allowed the 4th-most points to opposing running backs in 2022. Despite Jalen Hurts already racking up six touchdowns on the ground, Sanders has scored four rushing TDs in six games after scoring none in 2021.

Mostert now has 15 or more touches in four straight games for Miami and has cemented himself at the top of the running back depth chart for now. We look to capitalize on his workload against the worst defense in the league, the Detroit Lions.

Brown’s 503 receiving yards rank 8th in the NFL in spite of the fact that the Eagles already had their bye week. As the leader of the receiving corps in Philadelphia, he gets a date with a banged-up Steelers’ secondary in Week 7 with an extra week of rest and prep in between.

Hopkins showed that distance does make the heart grow fonder in his return from suspension last week. He drew 14 targets from Kyler Murray in the Cardinals’ win over New Orleans and has had the long week after a Thursday night game to recover after his first game action in months. He’ll be a target hog again in Week 8.

Olave has become much more than the deep threat he was touted as coming out of college this year, racking up 13 or more targets in three of his last five games played. We love that volume and look for it to continue with Michael Thomas still on the mend.

After being virtually invisible for the first four games of this season, Gesicki now has 14 targets in his last two games. His three receiving touchdowns are tied for third at the tight end position this season.

He and the Dolphins should pick apart a Lions’ defense that has allowed the third-highest QB rating to opposing passers in 2022.

Moore found some solid footing in the Panthers' offense last week for the first time in 2022. He saw 10 targets, hauled in seven of those for catches, and finished with 69 yards and his second touchdown grab of the year.

If those numbers are to repeat in Week 8, it helps to be playing a Falcons defense that is allowing more than 305 yards per game through the air.

The Eagles have been chewing up opposing offenses on a weekly basis this season. They are tied for the league lead in takeaways and have allowed the third-lowest points in the NFL through six games.

In a home matchup with the sputtering Steelers’ offense, we’ll bank on Philly wreaking havoc again in Week 8.