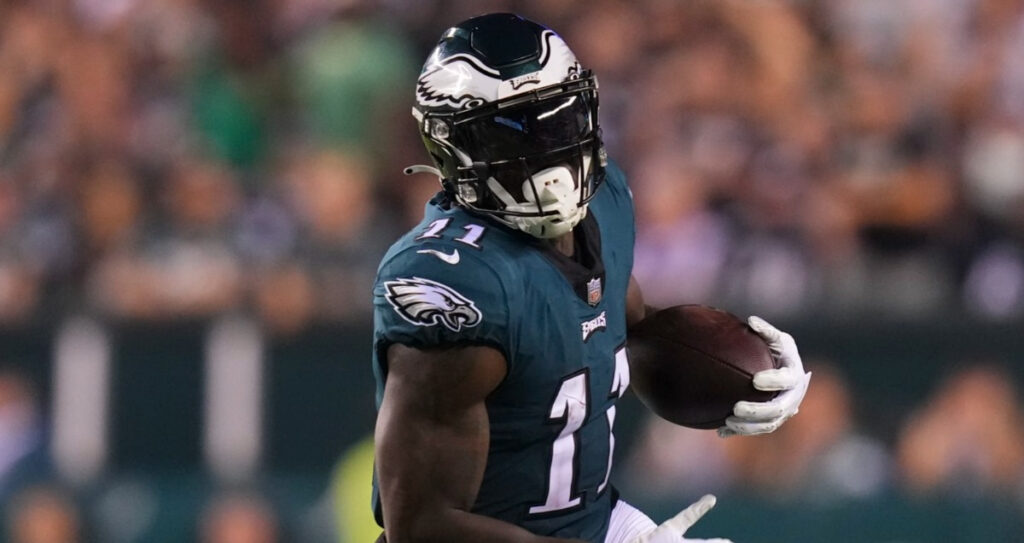 Our NFL Week 17 DFS lineup has AJ Brown in the Flex position.

We nailed four of our lineup selections in Week 16 to scrap our way to the precipice of a payday but ultimately fell just short with a couple of disappointing performances. TJ Hockenson led the way with 29.4 points, and our four receivers combined for 74.7 points to make up for 104.1 of our 135.7 points for the week.

Geno Smith and our pair of running backs didn’t perform as expected, meaning we finished just outside the money for Week 16.

With the second-to-last week of the regular season upon us, we’re prepared to finish strong and carry this momentum toward a winning day in the FanDuel $1M NFL Sunday Million.

Rodgers, in a down year, is 8th in passing touchdowns, 13th in passing yards, and 10th in completions this season. His main flaws have been a poor completion rate (31st in NFL) and his most interceptions since 2010 (11).

The future Hall of Famer has nine games with multiple touchdown passes this season and a division matchup against the worst passing defense in the league this week.

With the Packers on the cusp of a playoff berth, Rodgers and company won’t be letting their foot off the gas before the final whistle blows.

Allgeier has gotten 35 carries in the last two weeks with Desmond Ridder as the starter for the Falcons. With those carries, he's racked up over 210 yards and a touchdown.

He will take advantage of a matchup against a Cardinals defense that allows 4.6 yards per rush this season, the ninth-worst mark in the NFL.

Knight has struggled in the last two weeks as the Jets’ offense ground to a halt with Zach Wilson under center. Mike White retakes the quarterback job for Weeks 17 and 18 and will look to operate the team to a pair of victories to end the year. Knight will be a beneficiary.

St. Brown has scored in double figures weekly since Week 10 and gets a rematch with Chicago after torching them in mid-November. He has 92 targets in his last 9 games and will be Goff’s favorite once again in Week 17.

Speaking of target machines, London has 32 in his last three weeks and has established a nice rapport with Ridder in the last two. Arizona’s defense has allowed the fourth-most touchdown passes of all teams in 2022.

Zay Jones got the bad game out of his system last Thursday against a tough opponent on a short week. Houston has an above-average pass defense, and Jones was held to three catches for 12 yards the last time they met.

However, we think Jones will get the better of the Texans in this matchup after cementing his place in the Jags’ offense in November.

Engram has been another emerging figure in the Jacksonville offense recently, with 40 targets in the last four weeks as the Jaguars push for a division crown.

He’s averaging 92 receiving yards per game in that stretch and has hauled in three touchdowns to top it off. Engram should be in line for another 7-10 targets in Week 17.

Brown has only maintained his incredible form over the last month as Philadelphia looked dominant against a slew of non-playoff teams.

Whether Hurts plays this week or not isn’t as concerning, given that Brown hauled in six of eight targets for 103 yards last week with Gardner Minshew playing quarterback. We expect another impressive week from him against New Orleans.

The Eagles scored double-digit fantasy points even in a game where they allowed 40 points to Dallas last week. They do so many things well that it’s difficult for them to have a low-scoring or negative game.

Philadelphia has 6+ sacks in each of their last four games. They'll have extra motivation after a tough loss to the Cowboys last week and the chance to clinch a first-round bye in the playoffs on the line.