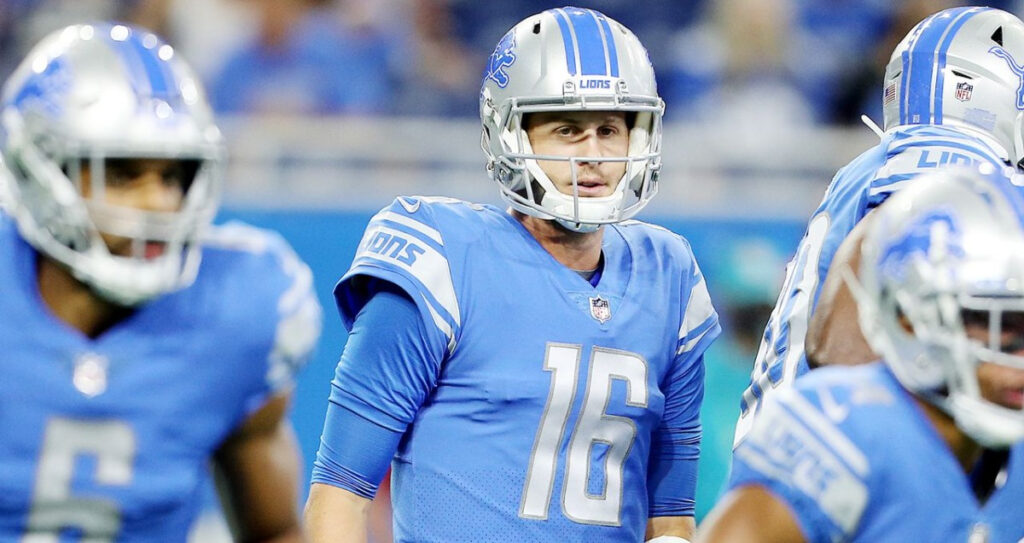 We like Jared Goff to have a big day against a lackluster Minnesota secondary.

If you needed further proof to believe in a four-receiver strategy in DFS lineups this season, look no further than last week’s results. The four receivers we started in Week 13 were all in the top 10 performers at the position.

We rolled to a Sunday payday with 90.9 points from Amon-Ra St. Brown, Christian Watson, Garrett Wilson, and DeVonta Smith, culminating in 142.76 points for the week. We would be remiss not to mention the 26.2 combined points from running backs Isiah Pacheco (15.2) and Dameon Pierce (11) at discount prices as well.

Week 14 marks the last time any team will be on a bye this season, though we do miss out on six teams to tie the most in one week this year. Our FanDuel DFS lineup for this second round of December games is presented here.

Goff is either in the top 10 or on the fringe of several important fantasy metrics for quarterbacks, such as passing yards (7th), passing TDs (10th), pass attempts (11th), and completions (11th). His matchup this week comes against the Vikings at home, the team that is allowing 283 yards per game to opposing quarterbacks. That is the highest in the NFL this season.

Goff will be airing it out in this potential shootout at Ford Field with a point total set at 53, and his own Lions’ defense ranked dead last in opponent scoring per game in 2022. It should be a huge week for the former Cal Golden Bear.

Pollard has outscored every other running back not named Josh Jacobs by a wide margin over the last four weeks, averaging 21.2 fantasy points per game in that stretch and scoring over 20 points three times in four games. He gets a cushy matchup against a Texans team that allows 169 yards per game to opposing ball carriers.

Knight showed fantasy players something last week by taking advantage of his opportunity to lead the Jets’ backfield for a day. He had 20 touches, converted those into 118 total yards, and scored in double-figures for the second straight week.

The Bills are next on the schedule but don’t overlook that New York ran for 174 yards in their Week 9 victory against the division leaders.

This trio of receivers saw 29 combined targets in Week 13 and are being offered at salary cap numbers that make them great fits for this lineup. All three are in the top 15 among receivers in receiving yards and are tied for 5th in the league with seven touchdown catches each.

This puts all of them on track for 1,000+ yard seasons, and we expect another dose of steady production from this reliable group. We especially like Lockett's matchup against the Panthers.

The Penn State product has cooled down since a four-week stretch from Weeks 7-11 in which he saw 35 targets and averaged 9.2 fantasy points per game. That said, he cleared 70 yards receiving last week for the fifth time this season and is fourth at the position in receiving yards and receptions in 2022.

We like the development of his relationship with Kenny Pickett, and will play Freiermuth in Pittsburgh’s rivalry game with the Ravens in Week 14.

Gallup posted his best performance of the season last week in Dallas’ fourth-quarter rout of Indianapolis, connecting with Dak Prescott for two touchdowns on four catches.

Week 13 marked the second straight instance of Gallup seeing 7+ targets, and we see this as a sign of him reacclimating within this Cowboys’ team. It can be risky playing someone after their best game of the year, but we’ll roll with Gallup at this cap number.

This one kind of speaks for itself after seeing what San Francisco did to Miami’s high-scoring offense last week. They are top 10, if not top 5, in almost every major defensive category in 2022 and just posted their third straight week of double-digit fantasy points heading into a matchup with Tampa Bay. The 49ers will live in the backfield on Sunday to the detriment of Tom Brady and the Bucs.