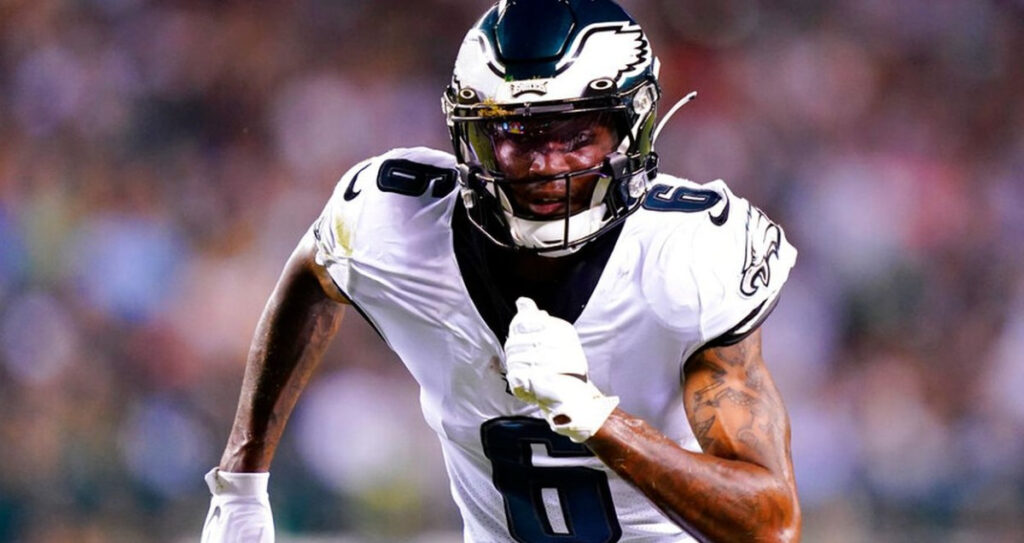 DeVonta Smith should have a big day against a suspect Titans secondary on Sunday. He's a key piece of our NFL Week 13 DFS Lineup.

Every other player scored in double figures save for Christian Kirk and Josh Palmer, who combined for less than 15 points between them. Since these players kept us out of the money, neither one of them will be receiving Christmas cards from us!

All of that being said, our four-receiver lineup strategy seems to be trending in the right direction so we’ll stick with that logic heading into Week 13. Our FanDuel DFS lineup for this week is just ahead.

Lawrence has averaged just shy of 21 fantasy points per game in the Jaguars’ last three and gets a matchup with the bottom-ranked Lions’ defense this week in a dome.

He’s thrown six touchdowns in that recent stretch and averaged 271 passing yards per week across those three games. We project him to hit the 20-point fantasy mark again in Week 13.

Pacheco now has over 17.5 carries per game since becoming the full-time starter for Kansas City on November 13. He had 22 carries last week and scored his first rushing touchdown since Week 1 in a victory over the Rams. He’ll do more of the same against an average Cincinnati defense this Sunday.

Pierce’s production has dropped off lately as the Texans’ struggles have continued. He’s managed 15 carries total in the last two weeks and combined for just 5.8 fantasy points in that time. We expect a bounce back against the Browns in Week 13 in a run-heavy matchup.

We’ve decided to welcome St. Brown back into our lineup after his midseason slump and expect we’ll be rewarded for placing that confidence in him. He has seen an average of 9.6 targets per game since October 30 and faces a Jags’ defense that rests in the bottom 10 of the NFL against the pass in 2022.

Wilson showed last week against the Bears that he and Mike White have a solid connection, turning in five catches on eight targets for 95 yards and two touchdowns. Minnesota is vulnerable to the passing game and Wilson will exploit that weakness.

Watson has been red hot in the last three weeks as well, hauling in six touchdowns and eclipsing 100 receiving yards twice in that time. We’ll start him in our Week 13 lineup against a Bears’ defense that just got torched by the Jets.

All Hockenson has done since being traded to Minnesota is collect 34 targets and 26 catches en route to a TE3 ranking in those four weeks. His seamless transition into the Vikings offense was capped off last week by his first touchdown in purple and gold.

While the Jets are a tough opponent, we expect a large target share for Hockenson as the player not being defended by Sauce Gardner and the talented Jets’ corners.

After his two-target, two-catch performance against Houston in Week 9, Smith has seen 26 targets in three games and continues to get opportunities with Jalen Hurts forcing defenses to defend against his running ability.

We predict he’ll see another 6-10 targets Sunday against Tennessee and put up double-digit fantasy points for the third time in four weeks.

Baltimore is 6th in the NFL in sacks this season and has taken down opposing QBs 24 times in their last six games. They’ve also generated nine turnovers in that span and will host the Denver Broncos on Sunday, the lowest-scoring team in the NFL.

Baltimore will capitalize on their recent form and this matchup to post double-digits for our lineup. Russell Wilson should be running for his life in this matchup.