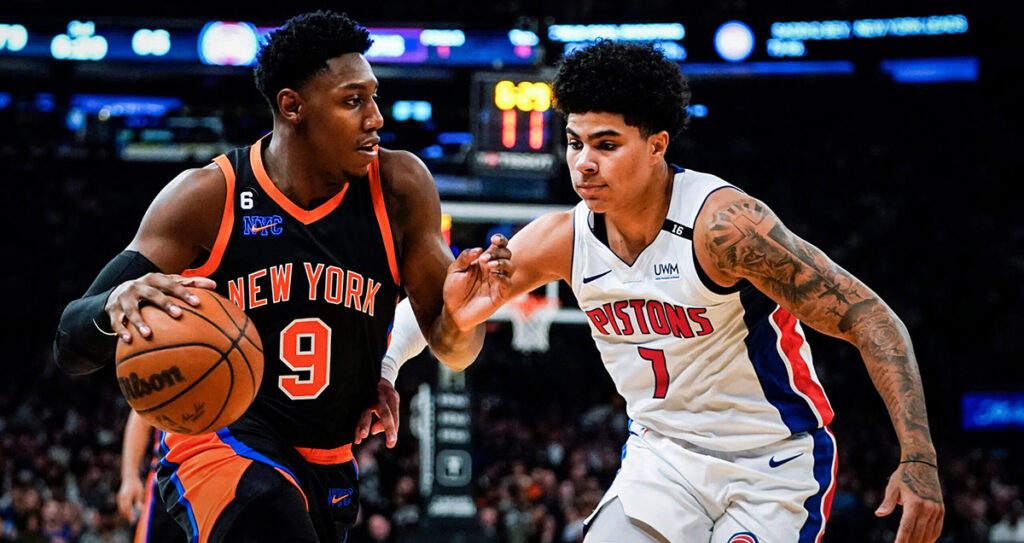 We expect Barrett's struggles to continue and are taking the under on his points prop on Tuesday.

The Tuesday night NBA slate features only three games but includes what should be an entertaining doubleheader on TNT. The Warriors travel to Dallas to take on the Mavericks at 7:30 PM, followed by the Clippers at the Trail Blazers at 10:00 PM. The only other game on the schedule tonight is the Knicks at the Pistons.

Our team has picked through all three of the games on tonight's schedule to bring you our 5 favorite player prop bets for the slate.

Barrett is averaging 18.5 points per game on the season and 17 per game in his career against the Pistons. He has gone under this number in 6 of is last 8 games and is shooting under 30% from long range. While almost anyone in the NBA could have the ability to put up 20+ on this Pistons team, we believe the scoring will be dispersed rather evenly on the Knicks tonight and the game to be in hand early in the 4th.

Wiggins has surpassed this total in 5 straight games. However, he is facing a Mavs team that has given him scoring troubles recently. He is averaging right around 15 points per game over his last 5 meetings with the Mavericks. We expect him to once again be held in check here in Dallas.

On the season, Looney is averaging just 6.9 boards per game. Over his last 5 games, he has exceeded 7 boards just once. Tonight he faces a Mavs team that has been kind to him on the glass. Over his last 3 games against Dallas, he has had rebound totals of 9, 10, and 9 respectively. We believe he will continue to own the paint in the rebounding department against the Mavs tonight.

This is a value play as we believe we are getting an inflated price on this total due to the fact that Brunson was able to grab 4 steals in his last game against the Pistons. Over his last 6 games, he has failed to pick up a steal in half of them. With the plus money here, we like the law of averages to even out after his 4-steal performance in the last meeting.

Luka Doncic: 45+ Pts/Reb/Ast & 1+ Steal & 2+ Threes (-105 at Draftkings)
We are riding Luka’s stat line tonight for our SGP. In his 14 career games against the Warriors, he has been able to get a steal in 12 of the contests. He is averaging over 50 in the P/R/A department on the season and is coming off a 41 point performance in his last meeting with the Warriors. He has made at least 2 threes in 8 of his last 10 games, including 6 straight. Prime time game on national TV, we expect Luka to show out big tonight.