Michigan State vs Washington - Betting Preview and Our Best Bet 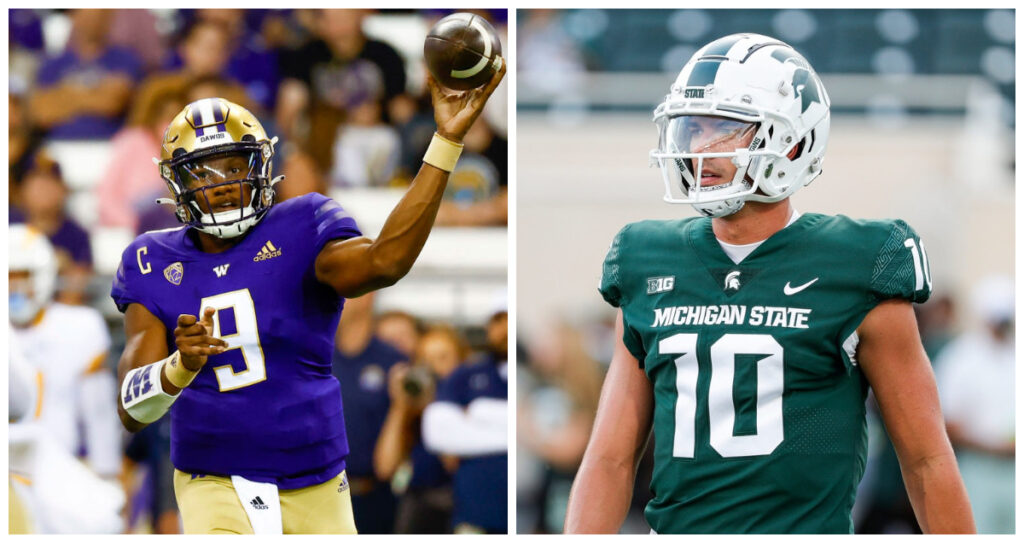 Michael Penix Jr. faces off against Payton Thorne in Saturday's matchup of Michigan State vs Washington.

For the No. 11 Michigan State Spartans to play the Washington Huskies in Seattle Saturday, the Big 10 squad will travel more than 2,000 miles for a regular-season battle between two undefeated teams.

The Spartans have made seven trips to the West Coast over the past 40 years, finishing 1-6 in such games. In fact, Michigan State’s last victory playing in the Pacific Time Zone during the regular season was in 1984 against Colorado.

Will the past repeat itself on Saturday, giving Washington a marquee win in head coach Kalen DeBoer’s inaugural season with the Huskies? Or will Michigan State return home with its unblemished record intact?

What to Expect from Michigan State Offense vs Washington

Most offenses would struggle to replace Kenneth Walker III as their team’s primary running back the following season. Michigan State, however, found a gem in Wisconsin transfer Jalen Berger. The sophomore RB has 33 carries for 227 yards and four TDs as Berger leads a Spartan rushing attack that has amassed 457 yards against two Mid-American Conference schools.

Junior QB Payton Thorne returns this season as the Spartans’ signal caller. In 2021, Thorne completed 60% of his passes for 3,240 yards and 27 TDs.

The top target for Thorne will again be 1,000-yard, WR Jayden Reed. Reed has already caught eight passes for 107 yards to begin the season.

What to Expect from Washington Defense vs Michigan State

Washington hit the transfer portal to bring in the talent necessary to replace six starters and match the Huskies' new defensive scheme (4-2-5) with the personnel needed to run it. Against two outmanned opponents, the results have been encouraging.

The retooled LB position has two standouts starting in Pitt transfer Cam Bright and Washington native Alphonzo Tuputala. The duo notched 21 tackles and a pair of TFLs, including one sack, in their first two games. Safety Asa Turner has led the nickel coverage, sniping two passes and recording eight tackles from his roaming position.

What to Expect from Washington Offense vs Michigan State

One of DeBoer’s previous stops before coming to Washington was at Indiana University, serving as the offensive coordinator in 2019. DeBoer’s QB then - and again now - is Michael Penix Jr. Now a junior, Penix has completed 70% of his passes in two games, throwing for 682 yards and 6 TDs to start the year.

A pair of sophomore WRs in Jalen McMillan and Rome Odunze have served as Penix’s top targets thus far. McMillan has 9 receptions for 214 yards and three scores. Odunze - who was injured in the season opener - is also expected back for this game after catching seven targets for 84 yards and a TD.

On the ground, expect Wayne Taulapapa to carry the workload in a crowded backfield. Through two games, Taulapapa - a Virginia transfer - has a team-best 23 carries for 151 yards and two TDs. Fellow RB Cameron Davis has 18 carries on the young season for 88 yards and three scores.

What to Expect from Michigan State Defense vs Washington

Albeit against Western Michigan and Akron, the back four are showing significant advancement in 2022. CBs Charles Brantley and Ameer Speed have combined for 28 tackles while breaking up four passes. Safety Angelo Grose has also defended a pair of passes while recording 18 tackles on the year.

Up front, star LB Jacoby Windmon returned for his senior season and continues to wreak havoc on opposing offenses. Through two games, Windmon has 5.5 sacks and an NCAA-best four forced fumbles along with 12 tackles.

The Huskies have covered the points in four of its last five games, and the game against the Spartans doesn’t appear to be a streak-busting matchup for Washington. Both teams enter the game with talented offenses to go against each other’s rebuilding defense. Neither the Huskies nor the Spartans have proven they are capable of shutting down a decent Power 5 offense over the past two years, so it would be wise to expect the same Saturday night.