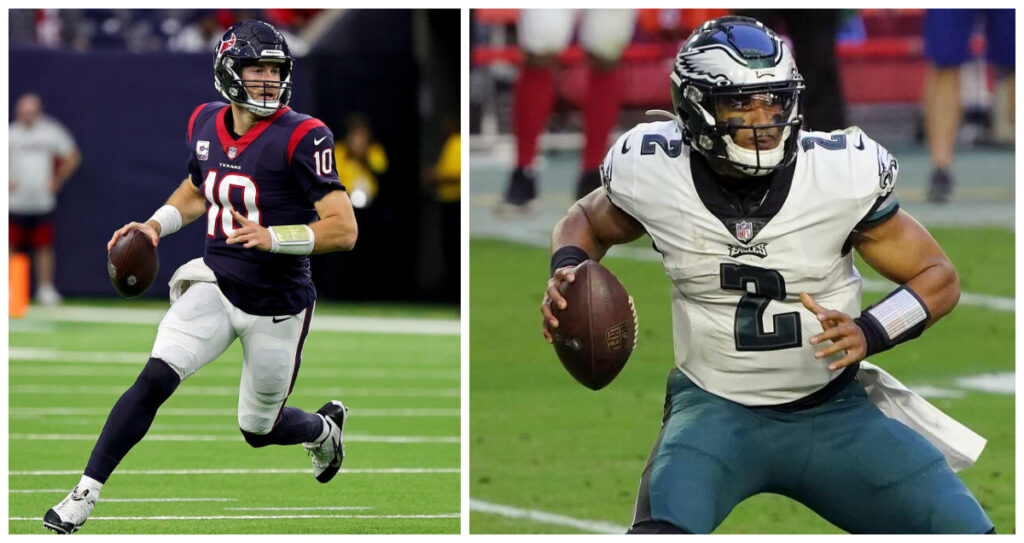 Can Davis Mills and the Texans stay within the number against Jalen Hurts and the Eagles on Thursday Night Football?

We hit our play last week on the Ravens as short road favs over the Bucs but we lost our under as the total went over with just under 1 minute remaining in the game. The Ravens held Brady to just 26 of 44 through the air and won the turnover battle 1 to 0.

This Thursday we get a much different matchup as the 7-0 Philadelphia Eagles head into Houston to face the 1-5-1 Texans. We have a play on the side and total as we do each Thursday night so let's get to it!

This Eagles team is in rarified air and the murmurs about the possibility of an undefeated season are slowly building. The hype would likely be louder if it weren’t for the World Series run the Philadelphia Phillies are on.

The Eagles are fresh off a 35-13 smashing of the Pittsburgh Steelers where they forced 2 turnovers and were an incredible 7 of 12 on 3rd down. AJ Brown blew up for 6 catches and 156 yards while scoring 3 touchdowns.

Jalen Hurts was near-perfect and threw for 4 total touchdowns while Miles Sanders made the most of his 9 carries by going for 78 yards and a score.

The Texans picked up their 1st win over the Jaguars prior to heading into their bye week. Coming out of the bye, the same Texans team has lost back-to-back games to Vegas on the road and then Tennessee at home last week.

Houston was shredded by Derrick Henry, who went off for 219 yards and 2 touchdowns on 32 carries. They had no answer for him while the Titans' leading receiver had just 2 catches for 26 yards.

The Texans did not deal Brandin Cooks as many thought would happen at the trade deadline and he does not seem happy about staying in Houston. This is a game that the Eagles should win by 20 or more points with relative ease.

However, it is a Thursday night and the Eagles are on a short week. Philly hasn't been great against the number on the road. This spread just seems too big and will allow for a late meaningless backdoor touchdown from the Texans for a cover.

The Eagles just seem due for another lower-scoring road game like they had in Arizona. If there is even 1 Philadelphia turnover, that will do wonders for this under. It's kind of scary pulling the trigger on this one but we think the Under is the right play.