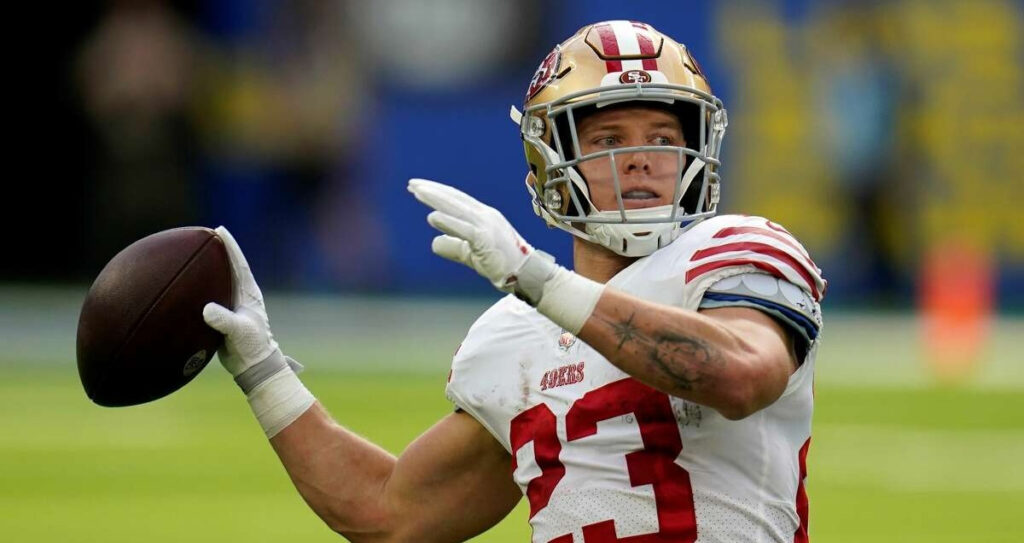 The Divisional round weekend concludes with two matchups between teams that are in the top six of the eight remaining in terms of Super Bowl odds for 2023. What that tells us is that both of Sunday's games could come down to the wire.

Our DFS lineup for the FanDuel NFL Sunday Million consists of a mixture of 49ers, Cowboys, Bills, and Bengals as we look to cash in before the season winds to a close. Our lineup selections for this Sunday’s action are up next.

The Brock Purdy show continued in his first playoff action as a pro as the rookie accounted for a career-high four total touchdowns and threw for 332 yards in a 49ers’ rout of the Seahawks.

Purdy has scored 15+ fantasy points in every game as a starter dating back to early December, and San Francisco will face one of their toughest tests yet in Dallas this Sunday.

We like Purdy to continue his impressive first year with another 15-point effort against the Cowboys.

McCaffrey has been on a different level in terms of performance since December began, averaging 21.8 fantasy points in seven games after scoring eight touchdowns and gaining 903 total yards. He is the engine that drives this offense and will continue to power San Francisco in their Super Bowl quest.

Singletary and his backfield mate James Cook are difficult to separate when choosing one for a DFS lineup. Both saw 10 or more carries in Buffalo’s win against Miami without getting targeted in the passing game, but Singletary did have 20 more targets during the regular season.

With Singletary’s combination of playoff experience and more work as a pass-catcher, we’ll take him on Sunday over Cook.

Diggs has rattled off back-to-back weeks of seven catches and 100+ receiving yards for Buffalo in games they needed to win for playoff seeding and to continue their season. With the season on the line once again, we’ll take Diggs to lead our receiving corps after another All-Pro-caliber season in Buffalo.

Lamb has scored four touchdowns in the last four weeks, including one against Tampa Bay in their Wild Card win. He’s averaged 17.8 points per game since a December 18 loss in Jacksonville and will be heavily involved if Dallas is to challenge San Francisco on Sunday.

Rounding out the receiver group is our diamond in the rough play of the day, Khalil Shakir. He popped back onto Josh Allen’s radar last week against the Dolphins by playing 30 snaps and seeing five targets. He could very well disappear again this weekend, but we’ll see if he can get us 6-8 points in a lineup with some heavy hitters.

Knox has put together an impressive month of performances that include three games of 11 or more fantasy points and no less than eight points since December 1.

He’s caught a touchdown each week during this stretch and should be a red zone threat who draws Dallas’ attention on Sunday afternoon.

Higgins has been quiet since an eight-catch, 128-yard game against New England on Christmas Eve and managed just under 10 fantasy points in two full games since.

His targets have still been in the six or seven range the last two weeks, and we expect him to get behind the Buffalo defense at least once to give our lineup a big play boost.

All of the offenses in action on Sunday can score 30+ points if given the chance, and we like Buffalo’s ability to generate scoring opportunities on defense to counteract that and provide fantasy value.