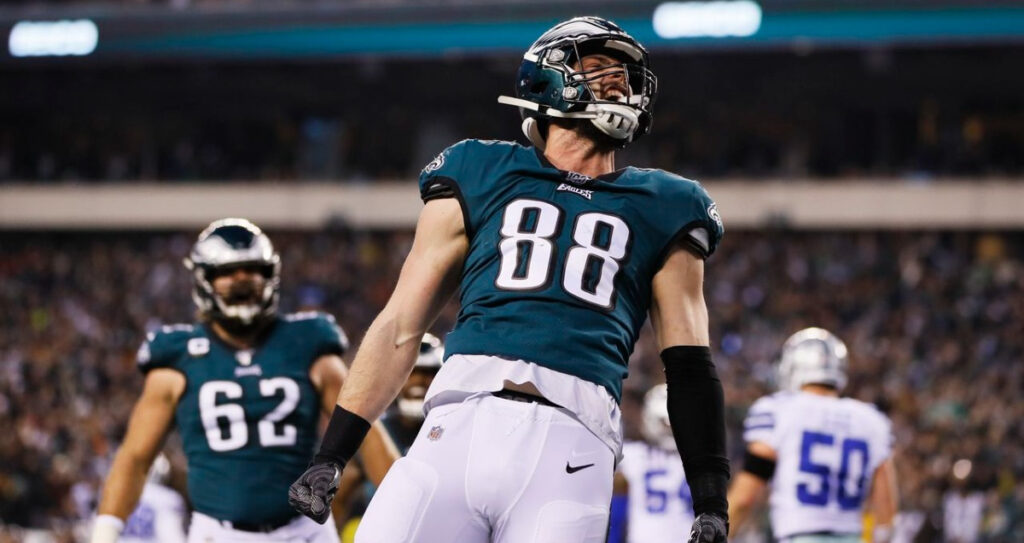 We like Dallas Goedert to go Over his receiving yardage prop on Monday Night Football.

Happy Monday fellow sports investors! Unfortunately, it was not a happy Sunday for our player props as they stumbled to a 1-3 mark. Our only winner was on Travis Kelce Over 73.5 receiving yards.

After a sizzling start, we're now 40-35 on the season and need to get back on track for the stretch run. When betting on the NFL, you have to be prepared for lots of peaks and valleys. That's why we constantly preach about money management around these parts.

A pair of NFC East rivals will meet to put a bow on Week 10. Can the Commanders slow down the mighty Eagles at all? Here are 3 PrizePicks props for Monday Night Football.

Goedert's been one of Jalen Hurts' favorite targets all season long and we expect another big performance from him tonight. In last week's game against the Texans, Goedert hauled in 8 receptions for 100 yards and a touchdown. The week before that against the Steelers, the former South Dakota State standout racked up 64 receiving yards.

We love the matchup on this play because the Washington defense will be focused on stopping AJ Brown and Devonta Smith. That should leave plenty of room over the middle for Goedert to do some serious damage. He's gone Over this receiving yardage total in 6 of 8 games.

Goedert has also done pretty well against the Commanders in his career. He's averaging 4.3 receptions and 53.9 yards against Washington through 8 career games. That's pretty solid!

Gibson's had a weird season. He's never really gotten going this year and his snap count has dropped tremendously since Brian Robinson Jr. made his way back into the lineup. The former Memphis star is now used mainly as an option on 3rd down.

Philly's defense is nasty, as they rank 2nd in EPA passing defense and 6th in sack rate. What that tells us is that Washington is probably going to face a ton of 3rd and long situations tonight. If that happens, Gibson will mainly be used as a receiver instead of a runner.

Gibson has exceeded this rushing yardage in 6 of 9 games this season but we just don't see him getting many carries tonight. With Washington being an 11-point underdog, they may have to abandon the run game pretty early in this contest. We'll play the Under!

Who the heck is John Bates? Well, he's the backup tight end for Washington in case you didn't know (lol). Bates is used mainly as a blocker while veteran TE Logan Thomas gets the majority of the targets.

We already mentioned how stingy Philly's pass defense is. While that's a factor in this play for us, the main reason we like it is Bates' low snap count. He only played 39% of snaps last week against the Vikings and 33% against the Colts in Week 8.

For the season, Bates has only gone over this receiving yardage in 3 of 7 games. He may get a target or 2 in this game but our numbers have him topping out at 5 or 6 yards. Let's roll with the Under!

Best of luck with all your Monday Night Football action! Let's start another winning streak!