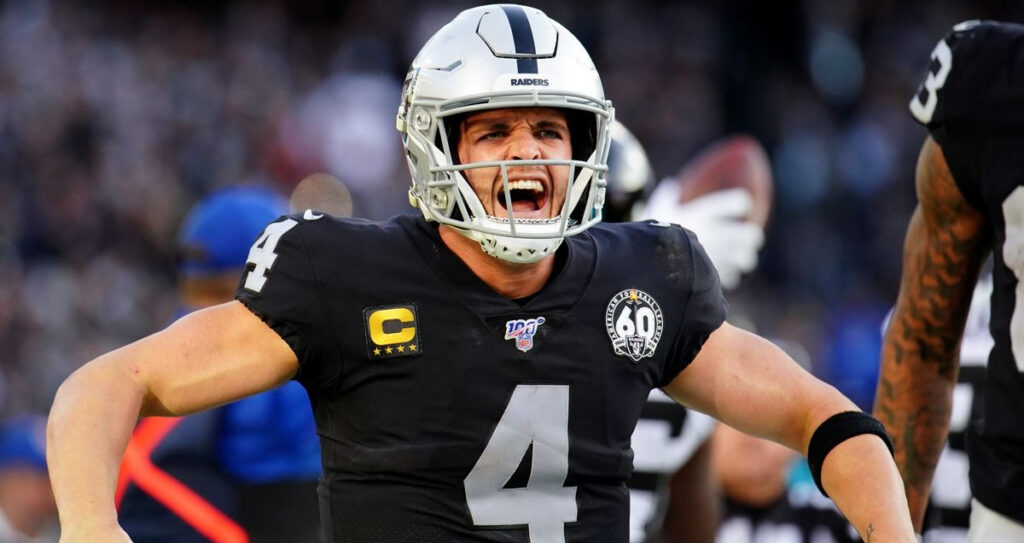 Derek Carr is part of our best Week 2 NFL DFS Lineup for the FanDuel Sunday Million.

After one week of NFL action, we’re ready to learn from Week 1’s results and build a strong lineup for Week 2. There were some great surprises in DFS last week for those who selected Carson Wentz, Saquon Barkley, or Jahan Dotson.

On the other hand, players who picked guys like Dak Prescott, Alvin Kamara, or Diontae Johnson did not have a good time. We’ll be entering this week’s lineup in FanDuel’s main offering for Week 2, which carries a $5 entry fee and pays $1 million to the winner.

Carr posted a pedestrian 16.8 points in Week 1 while throwing three interceptions and being sacked five times by the Chargers defense. He also fumbled twice, but the Raiders recovered both of those.

For someone who nearly turned the ball over five times, 16.8 points actually doesn’t sound so bad. This week, Carr and the Raiders get a home matchup against the Cardinals secondary that allowed 34.9 points to Patrick Mahomes in Week 1.

Williams racked up 12 targets, 11 receptions, and 18 total touches in the Broncos' Week 1 loss to Seattle. That volume, especially in the passing game, more than justifies his spot in this lineup.

Wilson Jr. steps into the lead running back role for the 49ers after Elijah Mitchell’s injury leaves their backfield with a void. We expect a healthy dose of touches, somewhere in the 14-16 range, for him against Seattle at home after a sloppy loss to Chicago in Week 1.

This trio of receivers combined for 37 targets, 24 catches, 267 receiving yards, and 2 touchdowns during the first week of the season.

Each of them is the unquestioned top pass catcher in their team’s offense and should combine for another 30+ targets in matchups against Jacksonville, Washington, and Denver this week. If they post a similar line to Week 1’s total, DFS players will be in great shape.

Ertz only got four targets in Week 1 but made the most of those opportunities by catching a touchdown and a two-point conversion to break into double-digit fantasy points. The Cardinals get a good matchup against the Raiders, who allowed Gerald Everett to score 12.9 fantasy points on Sunday. Look for Ertz to get more red zone targets in Week 2.

Swift got 18 touches in Week 1 against Philadelphia, racking up 175 total yards and scoring a rushing touchdown as the focal point of the Lions' offense. The hype around him coming into the 2022 season, perpetuated by Detroit’s featuring on HBO’s Hard Knocks, seems to be real.

As the Lions welcome their second straight NFC East opponent to Ford Field, we are expecting another high volume, high output game from the talented, young running back to round out this lineup.

The Bengals managed to score 2 fantasy points on defense despite playing 70 minutes of football on Sunday against the Steelers. They travel to Dallas this week for a matchup against the Cooper Rush-led Cowboys, and we are ready to pounce on this opportunity. Cincinnati has value at this low cap number against a backup quarterback.