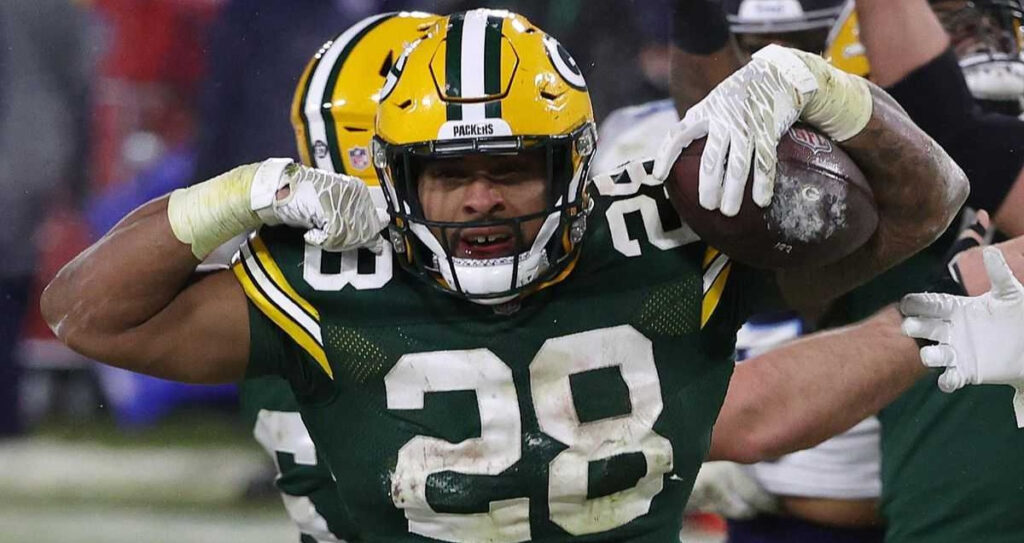 We like A.J. Dillon to score a TD as one of our top player prop bets for Bears at Packers on Sunday Night Football.

Sunday Night Football in Week 1 was a letdown on the part of both teams. The Cowboys really did not ever stand a chance despite playing on their home field. Their only redeeming quality was a defense that held Tom Brady and the Bucs to five field goal attempts despite allowing Tampa Bay into the red zone drive after drive.

Timely sacks by All-Pro Micah Parsons and the Cowboys' defense kept them in the game. Even before Dak Prescott left the game with an injury that will hold him out for at least the next 4-6 weeks, the Cowboys still never really threatened to score.

This week, the Chicago Bears travel to Green Bay to face the defending NFC North champs after beating the 49ers at home last week in an upset. For the Packers, Aaron Rodgers managed just 195 passing yards and threw an interception in their loss to Minnesota.

Green Bay will look to rebound in a game where they’re 10-point favorites at Lambeau. Ahead of this week’s Sunday Night Football clash, we’ve got a batch of player prop best bets to offer.

The H2H prop matchups this week are all heavily skewed toward the Packers in a game they’re expected to dominate. For large portions of Aaron Rodger's career, he’s been asked to make stars out of the skill position players around him when the team hadn’t prioritized signing or drafting offensive weapons.

With Davante Adams traded to Las Vegas this offseason, it puts Rodgers back in that familiar position where he’s working with very young or aging pass catchers whom he’ll have to put in positions to succeed. At this price, we like Fields to at least keep pace with Rodgers, and could see a push happening more often than a loss if last week is any indication. This one is worth a flyer to see what Rodgers can do with this receiving corps.

Dillon is being priced better than his backfield mate Aaron Jones to find the endzone against Chicago in Week 2. While Jones has the perception of being the more shifty, better pass-catching back, Dillon had more targets, catches, and receiving yards in Week 1.

The former Boston College standout also got the goal line duties at running back when the Packers were deep in Viking territory. We like Dillon to have at least as much of a chance to score as Jones, and at this better number, we’ll put our money where our mouth is.

Montgomery has averaged 90 yards from scrimmage per game in five career matchups against Green Bay. In his three most recent games playing against the Packers, that number jumps to 118 rushing and receiving yards per game as he’s become a more important part of the Bears’ offense.

Montgomery saw 16 or more touches in those three games against Green Bay dating back to 2020. While Khalil Herbert will continue to cut into his workload, that shouldn’t affect Montgomery’s productivity in gaining yards as much as it does his touchdown-scoring opportunities near the goal line. We think Montgomery crushes this number and will gladly hop on the Over!