Alabama vs LSU - Betting Preview and Our Best Bet 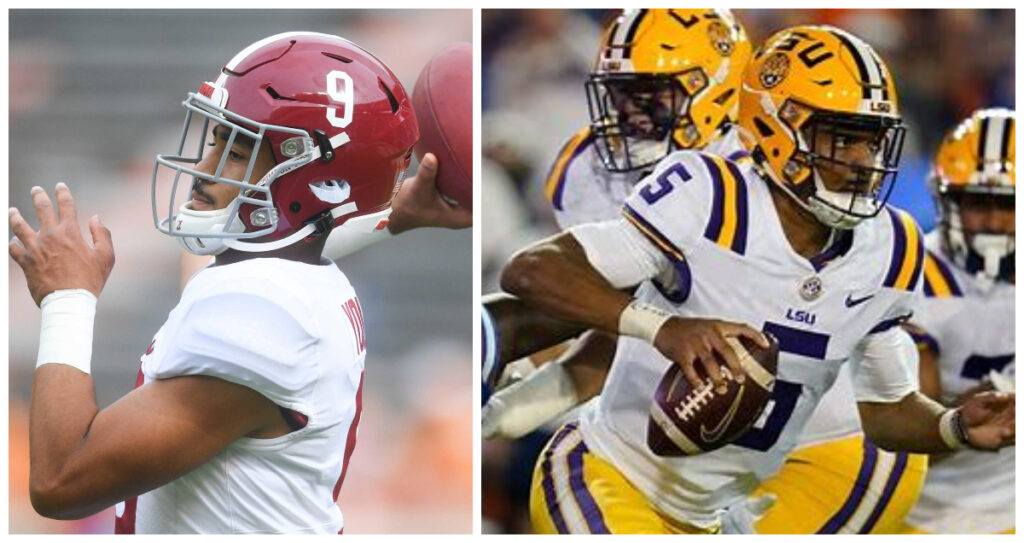 This week's Alabama vs LSU matchup will feature 2 of the best QBs in the country in Bryce Young and Jayden Daniels.

When the Alabama Crimson Tide rolls into Baton Rouge this weekend to face the LSU Tigers, the Saturday primetime matchup marks the 30th meeting between the two schools where both are ranked in the AP Top 25. Alabama enjoys the lead in such ranked-versus-ranked matchups, owning a 19-9-1 record in the series.

Entering the game this year, both teams are currently ranked in unexpected positions. The surprise behind the Tigers No. 16 ranking is how quickly head coach Brian Kelly has turned LSU around. In Kelly’s first year, the Tigers have only tasted defeat against Florida State in a sloppy season-opening loss and against No. 2 ranked Tennessee in October.

Meanwhile, the astonishment behind the Crimson Tide No. 6 ranking is that the SEC school enters its annual First Saturday in November rivalry game outside of the Top 5 for only the second time in the last 16 years, a feat last witnessed in 2010.

A berth in the SEC Championship game is possible for either team as the winner of this contest takes a decisive lead in the standings moving forward. Will Alabama continue its dominance over LSU, or will the Tigers tame the Tide under its new head coach?

What to Expect: Alabama Offense vs LSU

A future NFL starting QB in Bryce Young to lead Alabama’s elite offense. The Crimson Tide feature the fourth-best scoring offense (43.1 points per game) this season, largely due to Young and his 21 total TDs through eight games.

What to Expect: LSU Defense vs Alabama

The Tigers’ improved play on defense starts with their secondary. CB Mekhi Garner leads the team with five passes broken up and safety Micah Baskerville is the team’s leader in tackles with 50 total.

What to Expect: LSU Offense vs Alabama

When the Tigers secured QB Jayden Daniels’ services this year through the transfer portal, LSU fans were not expecting this dual-threat option to be as explosive in his first season. As a passer, Daniels has completed 70 percent of his passes for 1,812 yards and 12 TDs with only one interception.

On the ground, however, is where Daniels has thrived. The elusive signal-caller has rushed for 524 yards and nine TDs, both totals tops for the Tigers this year.

What to Expect: Alabama Defense vs LSU

Alabama’s defense is among the nation’s best in several categories. The Crimson Tide ranks seventh in scoring defense (16.6 points per game) and among the Top 15 in total defense and rushing defense.

While Alabama has steamrolled every team they’ve faced in Tuscaloosa, road games have not been as kind for the Crimson Tide. In three away games this season, Alabama is 1-2 ATS, losing to Tennessee as the favorite while failing to cover against Texas earlier this season.

Meanwhile, LSU at home is 4-2 ATS, only failing to cover spreads against Tennessee and Florida State in the season opener. Expect the Tigers to keep this game closer than predicted, having a chance to win the game late in Death Valley.