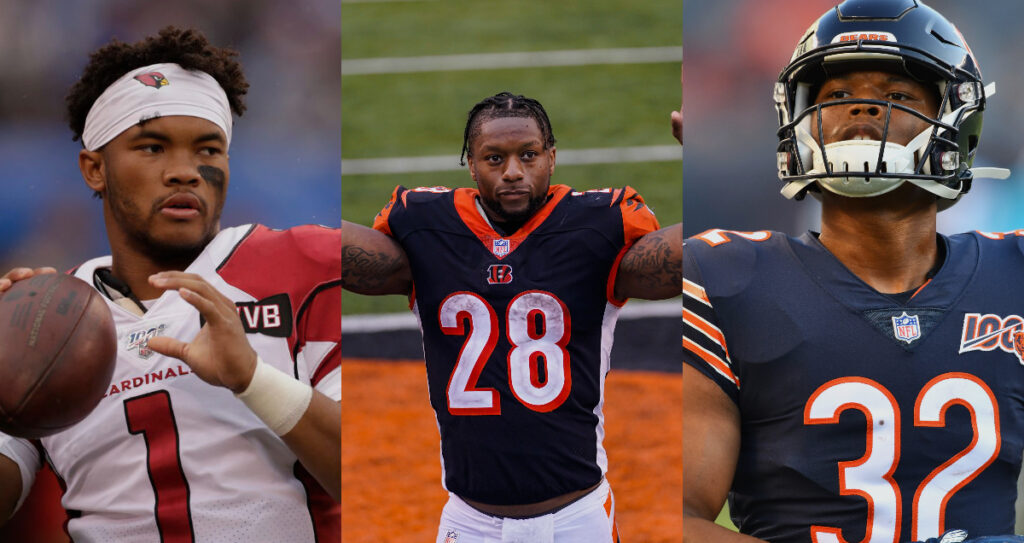 3 of our player prop bets for NFL Week 1 include Kyler Murray, Joe Mixon, and David Montgomery.

The 2022 NFL regular season is right around the corner! In the famous words of former Jets linebacker Bart Scott, we "Can't-Wait!" The NFL is the most efficient market in sports betting.

What does that mean? It means that the sportsbooks' lines are incredibly sharp for sides and totals in the NFL. Because of this, it makes more sense to devote more focus to player props.

This is our favorite player prop play of Week 1. Coop is only 28 years old but there's a reason why the Cowboys traded him. The former Alabama star still runs good routes but he just isn't quite as explosive as he used to be.

Last year, Cooper only averaged 57.7 receiving yards per game. He played in 15 games but only exceeded 100 receiving yards in two of them. It could also take Cooper a while to learn a new offense after four seasons in Dallas.

We also expect Cleveland to pound the rock since backup QB Jacoby Brissett will be under center for the first 11 games of the season due to the Deshaun Watson suspension. That should mean even fewer targets for Cooper and the Browns' wideouts. Plus, the Carolina secondary ranked 8th in yards per pass allowed and 3rd in passing yards allowed per game last season.

We love this one as well. Mixon should do a ton of damage against a Steelers rush defense that ranked dead last in yards per rush allowed and rushing yards per game allowed in 2021. We're also expecting Mixon to get plenty of carries since Joe Burrow may be a little rusty after recovering from a burst appendix.

The former Oklahoma star torched Pittsburgh for 255 rushing yards in two games against them last season. Everyone keeps assuming that the Steelers will be better against the run this season. We'll believe it when we see it. This sure looks like an easy Over!

Baker Mayfield will definitely be hungry for revenge against his old team but we think he could have a tough time against one of the best secondaries in the league. We expect Myles Garrett and Jadeveon Clowney to be in the backfield quite a bit against the Panthers. That won't give the Carolina receivers much time to get into any deep routes.

Moore is definitely the most reliable wideout on the Panthers roster, as he's racked up over 1,100 receiving yards in three straight seasons. Nevertheless, he'll be going up against Denzel Ward or Greedy Williams. Both of those guys are excellent corners and Grant Delpit will provide plenty of help over the top at strong safety.

Last season, Cleveland's secondary ranked 2nd in yards per pass allowed and 5th in passing yards allowed per game. Moore will get some receptions but we see him topping out at around 50 receiving yards. Take the Under!

We like Montgomery but this is a tough matchup for him against a nasty 49ers defense. The former Iowa State star did average 65.3 rushing yards per game last season but this could be a long day for him against the San Fran defensive line. Veteran 49er tackles Arik Armstead and Javon Kinlaw do a great job of clogging the middle, which should help our case for the Under.

In 2021, San Fran only allowed 3.9 yards per rush, which ranked 5th in the league. They also only surrendered 98.7 rushing yards per game, which ranked a respectable 6th. The scary thing is that this defense may be even better this season after adding USC standout DE Drake Jackson in the draft.

The Niners are a heavy road favorite in this game, so the Bears may have to abandon the run game to try and keep up. If that happens, we see Montgomery finishing in the 40s.

This is one of the highest totals on the NFL Week 1 board so there should be plenty of offense in this game. After a tumultuous offseason, we think Kyler Murray comes out with a chip on his shoulder and something to prove. The former Heisman Trophy winner threw for 270.5 yards per game in 2021, which points us slightly to the Over.

The main reason we like this total though is the lackluster Kansas City secondary. The Chiefs ranked 26th in yards per pass allowed and 27th in passing yards per game allowed last season. They spent four draft picks on corners and safeties so things should improve, but it'll take those rookies a while to acclimate to the NFL game.

We think Murray has a monster game by spreading the ball around to AJ Green, Rondale Moore, and Hollywood Brown. Also, don't forget about Zach Ertz and rookie Trey McBride at the tight end spot. As long as the O-line gives Murray enough time to throw he should exceed this yardage total.

Everybody and their Mama is high on the Chargers this year, and from an offensive standpoint, we get it. Keep in mind though that this Chargers defense was flat-out awful last season! LA picked up some nice pieces in the offseason but we aren't trusting this defense until they prove us otherwise.

All that said, we love Josh Jacobs to slice through this Chargers defense like a hot knife through butter. LA gave up 4.6 yards per carry last season (29th) and 138.9 rushing yards per game (30th). Khalil Mack will definitely help stop the bleeding but there's only so much one guy can do.

Jacobs came to camp a bit out of shape but he should be ready to roll by now. The former Alabama star didn't have a great 2021 but he still averaged 58.1 rushing yards per game.

We love that Jacobs torched this Chargers defense in Week 18 last year for 132 yards. He should have a great chance to crack the 100-yard mark in this one as well. We'll gladly take the Over!

Best of luck with all of your Week 1 player prop bets! Let's cash!