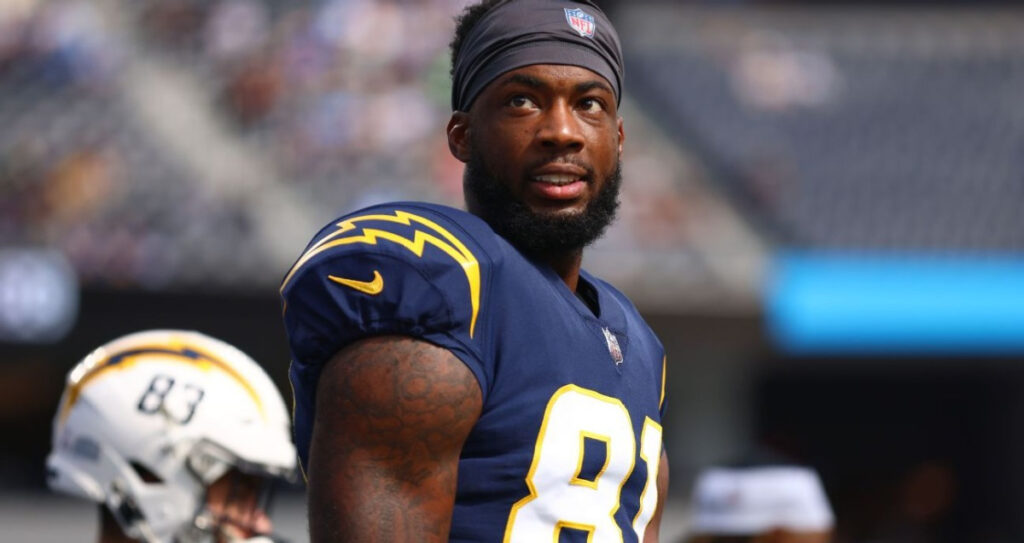 Mike Williams helped a bettor at DraftKings cash a crazy bet in Week 14!

Another Sunday of NFL football has come and gone! The Bills, Eagles, and 49ers all got victories and look to be sitting pretty for the home stretch of the season. Meanwhile, the Titans, Bucs, and Vikings all suffered surprising defeats.

Which bettors made out like bandits yesterday? Here are all the crazy bets that cashed from the NFL Week 14 card. These folks are loving life on this Monday!

DraftKings was one of the first sportsbooks to offer Anytime TD odds, and it's been a big hit among their customers! One bettor turned $10 into a whopping $42K on Sunday when this 7-leg Anytime TD Parlay cashed! How insanely cool is that?

While most folks probably aren't shocked to see Ja'Marr Chase, Mike Williams, or even Pat Freiermuth on this list, not too many people have heard of Isaiah Hodgins or Zonovan Knight! That just shows how unlikely this bet was to cash! In case you didn't know, Knight is a rookie RB for the Jets, and Hodgins is WR for the Giants.

Can you imagine how nervous this bettor was heading into Sunday Night Football? Six of the seven legs had cashed, and it was all up to Mike Williams! Thankfully, Williams didn't disappoint as he scored on a 10-yard TD reception early in the second quarter. You can bet this made our bettor at DraftKings happy! Hey, it's not every day you turn a Happy Meal into a small fortune!

Here's another Same Game Parlay winner that cashed out BIG! This sports bettor at FanDuel placed a Same Game Parlay that involved 3 different games. Three out of the six legs were on players from the Philadelphia Eagles.

Those 3 legs were no problem, as Jalen Hurts, DeVonta Smith, and Miles Sanders all found the end zone! None of these were even really a sweat because they all cashed in the third quarter or sooner.

Two of the other legs of the parlay were on the Cowboys' running back tandem of Ezekiel Elliott and Tony Pollard. This portion of the wager was a bit dicey. Most of the time, you don't want to parlay RBs from the same team.

While Pollard got his TD early in the first quarter, Zeke made this bettor sweat quite a bit! The former Ohio State star didn't find the end zone until late in the fourth quarter. All's well that ends well, though, and Elliot's 2-yard TD run gave the Cowboys a win over the Texans. It also kept this bettor's parlay alive!

Tyreek Hill, oh my god. Something new every week in this league. pic.twitter.com/2MBleHQUGF

With hay in the barn on 5 out of 6 legs on this parlay, it was all up to Tyreek Hill on Sunday Night Football. The former Chiefs star didn't let this bettor down, as he scored on one of the craziest fumble recoveries that you'll ever see. This play was pure insanity, and it was only fitting that it helped this bettor turn $50 into more than $4k!

We'll be back next Monday with more Crazy Bets and Bad Beats! Thanks for reading and good luck this week with all of your NFL action!