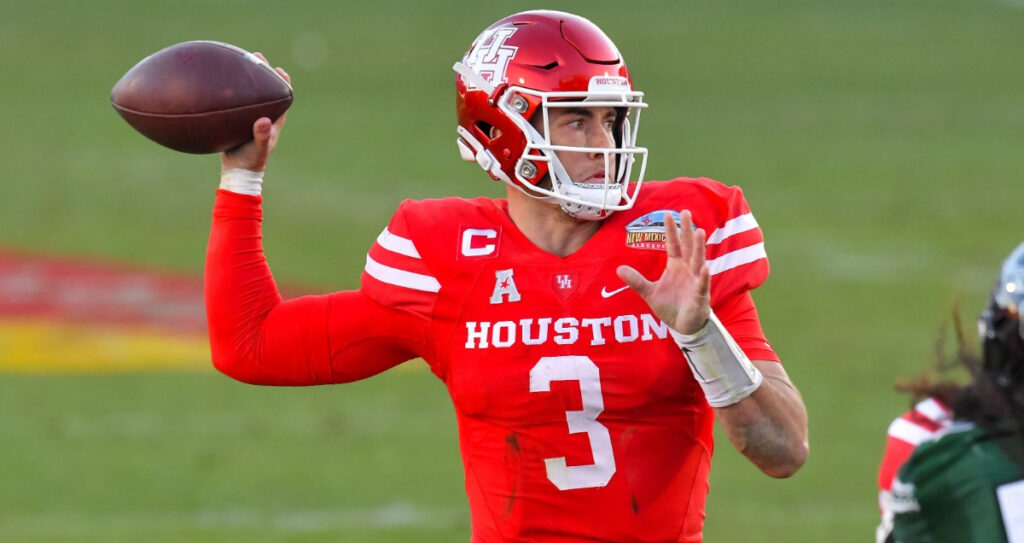 We like Clayton Tune and the Houston Cougars as one of our 2 college football best bets for Friday.

We nailed the Utah State/BYU game last Thursday and then followed that up on Friday by hitting both of our plays on Tulane and UCLA. The latter won outright as dogs in both games. A 4-0 sweep of the CFB weekday plays was just what the doctor ordered as we headed into the weekend.

With our plays on Wednesday hopefully starting us off on the right foot, we look to add to that here on Friday night, which gives us a nice mini slate to choose from much like last Thursday night. Houston is back on the slate and we have 2 college football best bets for Friday, October 7.

The Cougars have had a very underachieving season through 5 games. They are just 2-3 so far with their only wins coming against UTSA in week 1 37-35 and Rice 34-27. They are coming off a 27-24 loss to Tulane in overtime.

The Cougars were held to a field goal and then the Green Wave hit a 10-yard pass to win the game. They rank 24th in the country in 3rd down conversions at a 50% clip.

Memphis is off to a really hot start with a 4-1 record. They lost 49-23 at Mississippi State in the season opener and then bounced back nicely at Navy 37-13.

The Tigers are averaging 34.4 points per game and will look to continue that type of scoring here against the Cougars. Seth Henigan is no joke and has tossed 9 touchdowns and just 1 interception.

This line just seems like a trap to us. A 4-1 Memphis team at home that hasn’t lost in 4 straight against a 2-3 Houston team coming off a terrible loss to Tulane and they are only giving a field goal? Something stinks here and we are not falling for the trap. The Cougars will take this one on the road outright.

UNLV is 4-1 with their lone loss coming at Cal in early September 20-14. Aidan Robbins is averaging 101 yards per game on the ground and has 9 total touchdowns.

As a team, the Rebels haven’t had many issues scoring points as they are averaging 37.8 per game. They are coming off a 31-20 win over New Mexico last week where they put up 14 points in the final quarter to put the game away after being tied 17-17.

The Spartans are off to a similar start as the Rebels as they are 3-1 on the year. Their only loss came on the road to Auburn 24-16. They are coming off a thrashing of Wyoming on the road where they won 33-16.

The defense has led the way for them as they are holding opponents to just 15.75 points per game. Offensively, they are much more of a pass-happy team and have been averaging 275 passing yards compared to just under 100 rushing yards per game.

The Spartans seem to have the Rebels' number over the past 10 or so matchups. The defense should be able to hold up against the Rebels' offense.

Auburn is a much tougher team than UNLV and SJST held their own in that game on the road. At home against UNLV, San Jose State should be able to get a double-digit win.