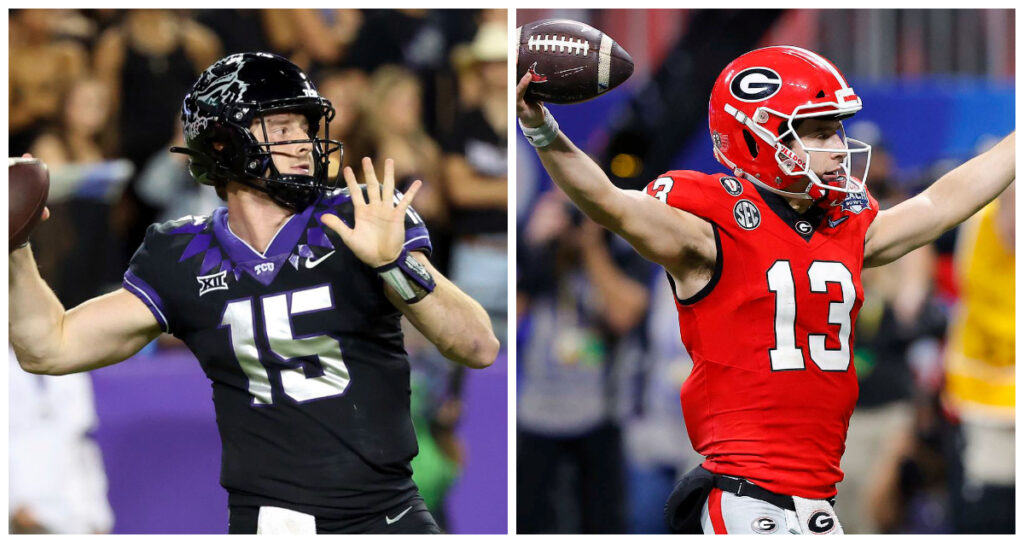 Ready for the CFP National Title game? We have PrizePicks props on both Max Duggan and Stetson Bennett.

The College Football season all comes down to this. The third-seeded TCU will try and take down the number one-seeded, defending National Champion, Georgia. Both teams have incredible talents, especially on the offensive side of the ball.

Ready to make some big money on the most important college football game of the year? Here are 5 PrizePicks props for the CFP Title game between TCU and Georgia. Best of luck with your action, and thanks for following along this season!

Max Duggan has quickly become one of the most electrifying players in college football. In TCU’s semifinal, Duggan rushed for 57 yards on 15 attempts, and he has rushed for over 26.5 yards in three of his four games.

Duggan is on a mission, and although they might be underdogs in this matchup with Georgia, Duggan will do everything he can to bring TCU the victory, including scrambling as much as necessary.

Although we believe Duggan to have a great ground presence during this game, we’re taking the under on his pass completions. Duggan has only hit the over on this number in three of his past eight games and should have a difficult time completing passes against a staunch Georgia defense.

Plus, we expect Georgia to own TCU in the time of possession battle, leaving Duggan and TCU to have a difficult time in the passing game.

Brock Bowers is quickly turning into one of the nation’s best tight ends. As a sophomore this year, Bowers has turned in 52 receptions, 726 yards, and six touchdowns.

We’re expecting a star-caliber player like Bowers to make his presence known in the College Football Playoff title game. He has hit the over on this total in his last two games and even has two games over 100 yards on the season.

Bowers will likely come alive in this game and should be a favorite target of Georgia quarterback Stetson Bennett. He should sail over this yardage total with relative ease.

Quentin Johnston has become one of the best wide receivers in the country. Johnston recently declared for the draft and has been one of Max Duggan’s favorite targets all season.

In the biggest game of his life and the last live game of his collegiate career, look for a star like Johnston to shine on this big stage. If he has a big game that we’re anticipating, his draft stock can only go up from here.

Stetson Bennett is coming off a 398-yard, three-touchdown game against Ohio State in the College Football Semifinal. Bennett already has a National Championship title game under his belt, so he knows what it takes to perform on a big stage.

In what will be Bennett’s final game under center for the University of Georgia, look for him to go out with a bang. We think the former walk-on throws for over 300 yards in his swan song game.

At 6-4 and 230 pounds, Bowers will be a matchup nightmare for the Horned Frogs. Bowers didn't catch a touchdown in the semifinals against Ohio State, but he did have a TD reception in the two games prior to that one.

Sure, the Dawgs love to run the ball near the goal line. However, if they do find themselves in a third-and-goal situation, look for Bennett to hook up with Bowers over the middle for a score. TCU will have no choice but to sell out to stop the run, which is ideal for Bowers and UGA's play-action game.

Why else do we like this play? FanDuel has Bowers priced at -190 to score a touchdown. Unibet and BetRivers aren't too far off that number, as they're both dealing -165. That leaves us with a ton of value on this play at PrizePicks!