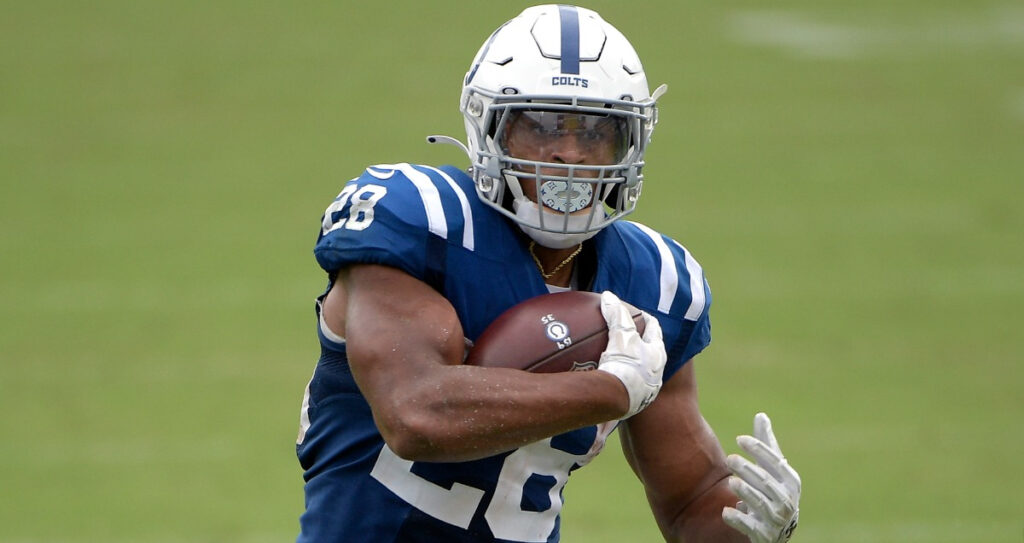 We like Jonathan Taylor to stay Under 85.5 rushing yards as part of our PrizePicks 2 Pick Power Play for Monday Night Football.

Does anyone else have a turkey hangover on this fine Monday morning? Our PrizePicks NFL player props stumbled to a 1-2 mark yesterday. Tua Tagovailoa easily went Over his passing yardage total but both Isiah Pacheco and DJ Moore went over their respective rushing and receiving totals.

Sam Darnold looked much better than we expected, which easily allowed Moore to eclipse his receiving yardage total. Pachecho was a bit of a heartbreaker for us, as he barely went Over his rushing yardage total by 5.5.

Anyways, it's time to move forward with this evening's Steelers at Colts matchup. We're locked and loaded to get back in the black with a PrizePicks 2 pick Power Play for Monday Night! Let's cash both of these!

Taylor is a true workhorse but he's struggled for much of this season so far. The former Wisconsin Badger has only found the end zone 3 times in 2022 and hasn't looked comfortable since his injury earlier in the year. Our projection shows that Taylor will only run for 73 yards tonight so we'll gladly jump on the Under.

Indy's offensive line just isn't nearly as dominant as they've been in years past. The Colts just aren't opening up many holes, which is why they're 24th in the league in yards per rush (4.1). Indy is also just 26th in rushing yards per game (98.7) and a putrid 30th in EPA per rush.

That shouldn't bode well for the Colts against the Steelers, who are 6th in yards per rush allowed (3.9) and rushing yards allowed per game (103.4). Pittsburgh is also a respectable 16th in EPA defense against the run.

When looking at Taylor's season-long and career-long stats, we like the Under even more! He's stayed Under this yardage amount in 6 of 8 games this year. For his career, Taylor is 23-17 to the Under vs. this number.

This one is a little bit scarier but we still like it nonetheless. Freiermuth has been a dependable option over the middle for rookie QB Kenny Pickett this season. However, Indy's pass defense isn't too shabby and we think they'll be able to contain Freiermuth in this game.

Pittsburgh is also just 27th in EPA per pass while Indianapolis ranks a respectable 10th. The Colts also pressure the QB at a pretty good rate, as they generate sacks on 7.84% of snaps. Pickett may not have much time to throw in this game.

Freiermuth's career numbers also point us toward the Under. He's stayed Under this receiving yardage in 18 of his 25 career games. That's good enough for a 72% win rate.

Best of luck with all of your Monday Night Football action! Let's put these in the W column to finish Week 12 on a high note.