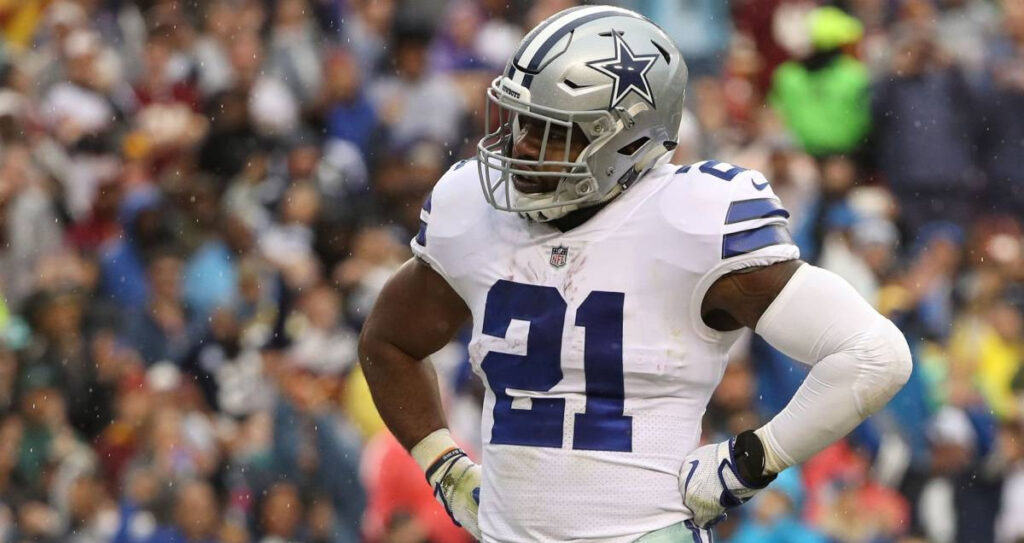 Ezekiel Elliott is part of our Same Game Parlay for Monday Night Football.

A pair of NFC East rivals will mix it up on Monday Night Football in Week 3. Few people would have predicted that the Giants would be 2-0 coming into this game, but new head coach Brian Daboll has the G-Men playing with a new attitude. It'll interesting to see if New York can keep the positive momentum going.

The Cowboys have compiled a laundry list of injuries so far this season, including star QB Dak Prescott. Even with that adversity, Dallas stunned Cincinnati as seven-point underdogs last week. If you want to make this game a little more exciting, here are our 4 player prop bets for Cowboys at Giants.

Jones has the ability to run as well as any QB in the league. With Barkley being the workhorse, we would not be surprised to see Jones keep one himself in the red zone this week and pick up a TD with his legs.

The Cowboys' defense ranks 2nd in the league in sack rate (11.27%) so Jones may be forced to run a bit more than normal in this game. The former Duke Blue Devil has scored five rushing touchdowns in his career and we think he gets number six on Monday Night. The generous price of +295 makes this one even more intriguing.

The Giants are a run-heavy offense. The Cowboys struggled against the run versus Tampa, which has a similar offense to this Giants team. Jones only threw the ball 21 times in their win over Tennessee but did put up 34 attempts last week.

The G-Men will be focused on keeping the Cowboys' offense off the field and will do so with Barkley running a good amount of the time. As long as the Giants don’t need a late comeback, this should cash easy. Our numbers have Jones topping out at 24 passing attempts.

Jump on this one now at Caesars because we don't think the plus money price will be there too long. We've already mentioned how much New York runs the ball, which means Barkley should get plenty of opportunities to rack up yardage.

The Giants are averaging 5.2 yards per carry, which ranks 4th in the league. They run the ball on 50.78% of their plays, which ranks 6th. Barkley looks to finally be 100% healthy and we think he cracks the 100-yard barrier in this game.

Kellen Moore keeps giving Pollard more and more snaps, especially on third down. That's the main reason we like Pollard to haul in at least three receptions tonight against the Giants. The former Memphis Tiger caught three or more passes in 8 of his 15 games last season.

Another reason we like Pollard to go over this number has to do with the Cowboys' game plan. Now that Cooper Rush is the starter for Dallas, Moore is starting to call screen passes more often to keep him comfortable. We saw this play out last week against the Bengals, where Pollard was targeted seven times.

Pollard has gone over this receptions total the last three times he has played against the Giants. We're betting he makes it four in a row tonight on Monday Night Football.

Out of the four 1st quarters played by both teams combined, only once did they go over this number. The Cowboys did so last week against the Bengals. We believe this will be low scoring from the get-go.

Zeke has yet to rush for over 55 yards this season and this should continue this week as well. Pollard looked great last week and should dip into Zeke’s carries this week.