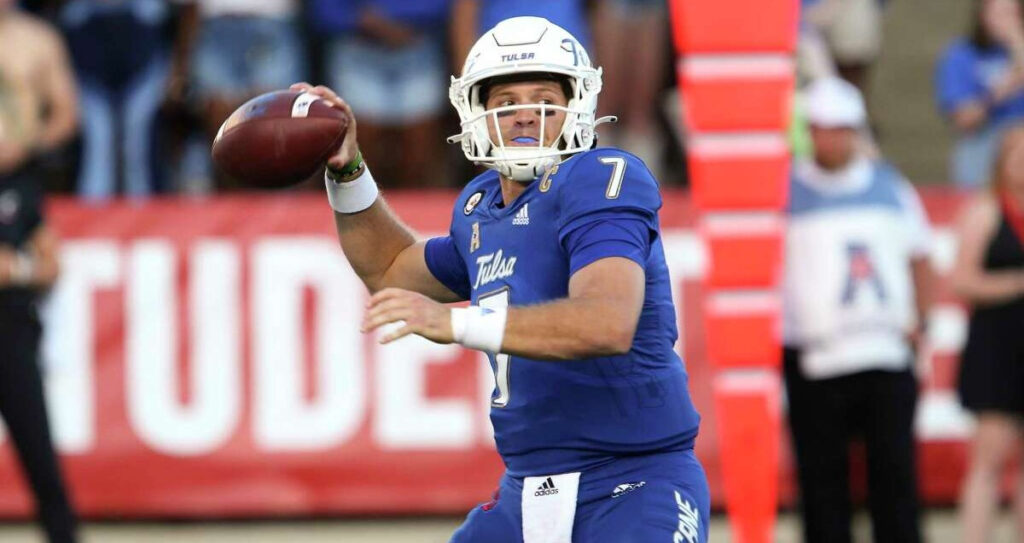 Davis Brin and Tulsa shouldn't have any trouble scoring against Temple's woeful defense on Friday night.

We were not able to keep the run going on Friday after going 2-0 the night before on the college gridiron. SMU left the backdoor open and allowed the Midshipmen to sneak in and steal the cover from us. We did hit our FIU play as a large underdog of 33.5 as they kept the game close till the end and ultimately lost by just 20.

This Friday we have another 2-game slate for us to dive into. Temple is back in action after getting slaughtered by UCF and letting us cash our ticket as they host Tulsa. UAB visits Western Kentucky in a battle of 4-win teams. Let's cash these two best bets!

Tulsa has been in a bit of a freefall after starting 2-1 on the year. Losses to Ole Miss and Navy on the road book ended a loss to Cincinnati. They are coming off a bye and have had time to prep for this 2nd half of their season and will start on the road against a weak Temple squad.

Tulsa’s passing attack has been on point averaging 327 yards per game which is 18th in the country. They are also in the top 75 in the country in 3rd down conversions with a 44.8% rate.

Temple is coming off their worst loss of the season to UCF 70-13. That is saying a lot for a team that also has been shut out already this season.

Temple just has nothing left to play for. After the beating to UCF, we expect the Owls to play with little passion and Tulsa to jump all over them after their bye.

Tulsa will have plenty of success through the air and Davis Brin will hit his average of over 300 yards per game and 156.5 QBR. Tulsa wins in a route here.

UAB is 4-2 on the year and is coming off back-to-back wins at home over Middle Tennessee State and Charlotte by an average of 20.5 points. The Blazers are 15th in the country in ground attacks as they average 244 yards per game there.

They also are in the top 60 in points per game with 34.5. The defense has been stout as well, holding opponents to just 17 per game which is 31st in the nation.

Western Kentucky is 4-3 on the season and has success on offense in a much different way from their counterpart this Friday. The Hilltoppers love to throw the ball all over the field and are averaging 344 yards per game which puts Austin Reed in the top 10 in quarterbacks leading passing offenses.

That offense has led them to 40 points per game and keeps the defense fresh. However, they are allowing over 22 a game to opponents.

We expect the Blazers to keep the ball on the ground and control the time of possession. That will keep Austin Reed off the field a good amount and tire out the Hilltoppers' defense.

WKU has a decent squad but their lack of defensive prowess will hurt them in this one. This Blazers team will be set for a road win in this matchup.