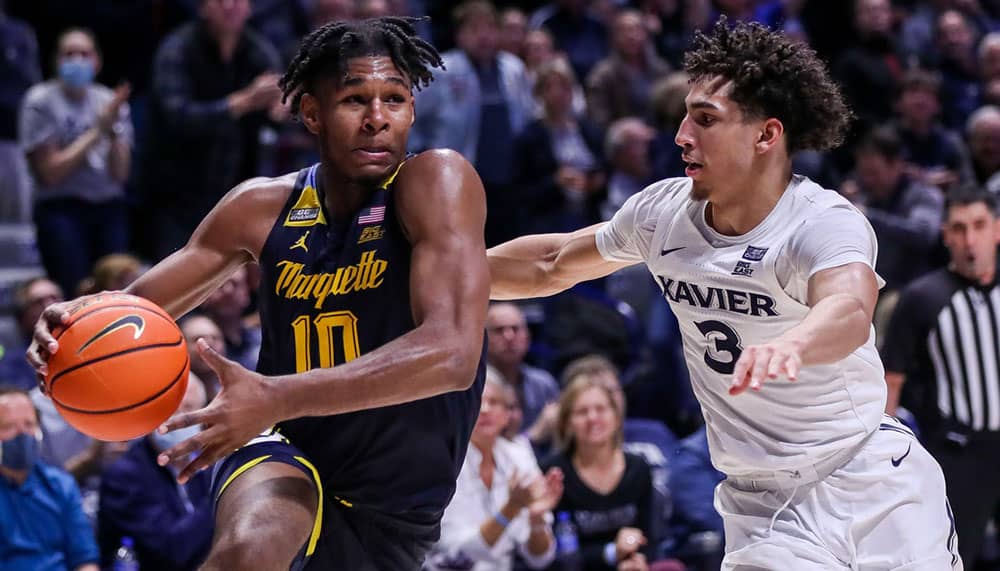 Sunday the #20 Xavier Musketeers will take on the Marquette Golden Eagles in a Big East matchup. Xavier is 3rd in the conference with a 4-2 record and has had a solid season overall accumulating a 14-3 overall record. Marquette trails them in the Big East and has a 5-3 conference mark while keeping a 13-6 record overall.

Xavier comes into this contest as winners of 3 of their last 4 games. Marquette is currently on a 5-game win streak. Both teams playing well lately should lead to a fun one Sunday afternoon.

Jack Nunge of Xavier leads the team with 12.6ppg on 52.6% shooting while also averaging 7 boards per game. Marquette’s Justin Lewis has been their standout player so far this season. He is leading the team in points (15.6), rebounds (7.6), and steals (1.2) per game. Expect both of these stars to put up solid numbers in Sunday’s contest.

The Musketeers picked up the home win in the last meeting with the Golden Eagles. This time it will be more difficult being on the road where Marquette is 8-3 on the season. The 80-71 win by Xavier in the last meeting was closer than the final score indicates. It was a 2-point game with just 2 minutes remaining before Xavier pulled away.

It was a barn burner last game as the Musketeers got a one-point victory over DePaul. They trailed by 2 at the half and were able to do just enough to squeak out the win. Xavier allowed DePaul to grab 16 offensive rebounds which led to DePaul getting 14 more field goal attempts than Xavier.

Nunge shot 70% from the field as he tallied 23 points in the win along with 6 boards. Only Colby Jones accompanied Nunge in double figures as he finished with 13 points. They will need more contributions on the road at Marquette Sunday afternoon.

Golden Eagles Taking Down the Ranks

The Golden Eagles have won 5 straight including knocking off #16 Providence, #20 Seton Hall, and #11 Villanova most recently. They look like a completely different team from the one that was saddled with a 4-game losing streak just a game prior to the 5-game win streak. They have been getting the job done with their defense that has held opponents to an average of 64.4ppg during their current 5-game stretch.

Marquette is coming off arguably their biggest win of the season as they knocked off #11 Villanova on the road 57-54. Their earlier win over Illinois at the beginning of the season would be the only other win that compares.

The defense of the Golden Eagles was spectacular. They held the Wildcats to just 37.9% shooting including 25% from deep. They frustrated Villanova’s 2 main threats, Collin Gillespie and Justin Moore by forcing them to shoot just 9-26 for a combined 23 points.

Justin Lewis was extremely efficient in the win scoring 21 points 50% shooting from the field, including 5-8 from beyond the arc. He added 7 rebounds to his state line in the win.

Betting Trends for Xavier and Marquette

Remember just ATS, no Over/under here. Order is two away (Xavier) and then two home (Marquette):

The Golden Eagles will improve to 6-3 in the conference after they take care of this Marquette team by double digits Sunday. Their tough new defense will be the difference-maker in the game. Also, their newly found confidence from knocking off all of those ranked opponents recently will fuel them to the win in this revenge game against Xavier.

Both teams like to get shots up early in the shot clock, but their defenses have been strong in forcing teams to use more of the shot clock than they are comfortable with. The Golden Eagles' defense will dictate the pace in this one and lead to the under. The total was 150 last meeting and they went over by a point. The total for this one is down to 146 which indicates to me that the scoring will be tamer than last time.