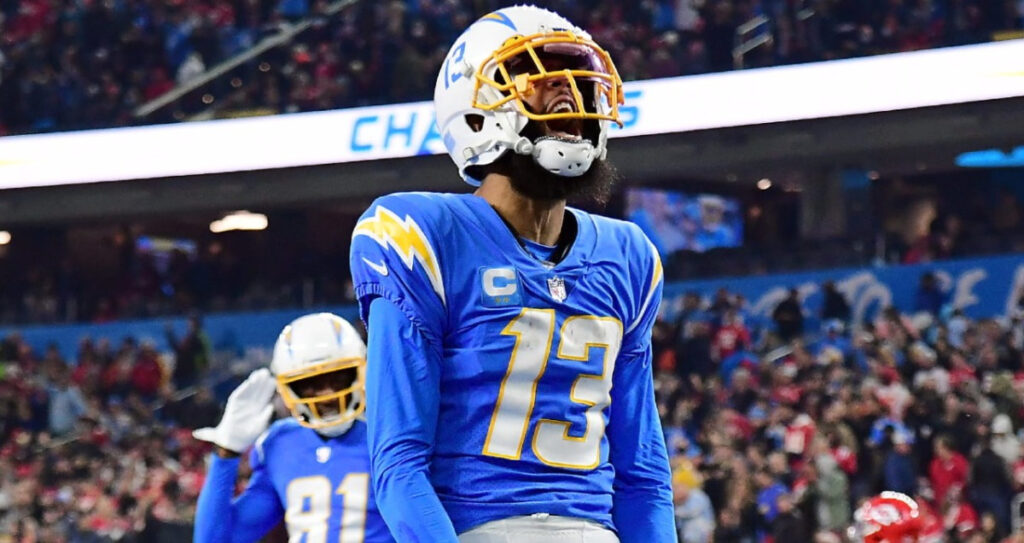 We're expecting a big game from Keenan Allen on Saturday during the Chargers vs Jaguars Wild Card matchup.

Our Week 18 lineup finished right at the 100-point mark to remain out of the payout positions thanks to underwhelming performances from Aaron Rodgers and Leonard Fournette. It’s usually not a good sign when your quarterback is nearly outscored by your defense.

In this column, we look ahead to the Saturday Wild Card doubleheader and project our DFS lineup picks for the FanDuel NFL Saturday Million contest.

For the third of four starting quarterbacks in terms of salary cap hit on the Saturday slate, we like Purdy’s consistency over the last month as a positive indication that he’s a high-floor player.

He’s thrown multiple touchdown passes every week since December 4th and hasn’t scored less than 15 fantasy points in that six-game stretch. That's not too bad for being Mr. Irrelevant!

Purdy scored 16.48 fantasy points against the Seahawks in Seattle on December 15th, and we like his chances to at least replicate that in a home playoff game Saturday.

Etienne racked up 294 rushing yards and 85 receiving yards in the three games before Jacksonville’s win against Tennessee last week.

He gets a rematch with the Chargers after rushing for 45 yards on 13 carries and hauling in three catches for 30 yards in their Week 3 matchup. We project he’ll see 15-20 touches and finish near the 20-point mark in this primetime slot.

Walker III has carried the ball 78 times in the last three weeks for a total of 354 yards against the likes of the Chiefs, Jets, and Rams. He saw 16 touches and his second-best receiving performance of the year in the Seahawks’ December battle with the 49ers this season and should improve upon that with another week of 20+ touches.

Allen saw 11+ targets for the fourth time in his last six games on Sunday and gets a matchup with Jacksonville’s 28th-ranked pass defense on Saturday night. With Mike Williams’ questionable for this game, Allen is a safe bet for another double-digit target day.

Speaking of Williams’ injury, we love Josh Palmer if he’s the second receiver in the Chargers’ offense for this game. In five games that Williams’ missed or didn’t finish between October and December, Palmer accumulated 46 targets, 31 catches, 372 yards, and two touchdowns. That’s good enough for us to roll the dice on him at this cap number.

Zay Jones is a lineup favorite for us over the last six weeks, and we like his volatility heading into this matchup with the Chargers’ secondary. He scored 31.9 points on December 18th and followed that up with 1.6 points four days later, which means we could be in for a bumpy ride. If he can get to seven or eight targets Saturday night, we love Jones to outperform his projection and salary number in this lineup.

Kittle has been the recipient of seven of Brock Purdy’s last nine touchdown passes since Week 15. He’s been the 5th-ranked player in all of fantasy football over that span and has outscored the next closest tight end, TJ Hockenson, by 29.8 points.

Their game against Seattle on December 15th started that streak, and we expect Kittle to keep it rolling in a game where San Francisco is favored by double-digits.

Aiyuk has been another beneficiary of Purdy’s recent hot streak and posted 241 receiving yards in the 49ers’ final three games to wrap up his first 1,000-yard season as a professional.

He was held in check during their Week 15 matchup against Seattle but has emerged as the top receiving threat not named George Kittle or Christian McCaffrey in the San Francisco offense since then.

Take a flyer on Aiyuk in the flex to accommodate some top players at receiver and tight end on Saturday.

Seattle has contained opponents over the last four weeks to an average of fewer than 17 points per game in a stretch that includes games against San Francisco and Kansas City.

The 25th-ranked scoring defense in the league will have their hands full against a 49ers’ team that has scored 33+ points in five of their last six games.

The Seahawks amassed nine sacks and four takeaways in their last two games of the season and averaged five fantasy points per game in two matchups with San Francisco in 2022.