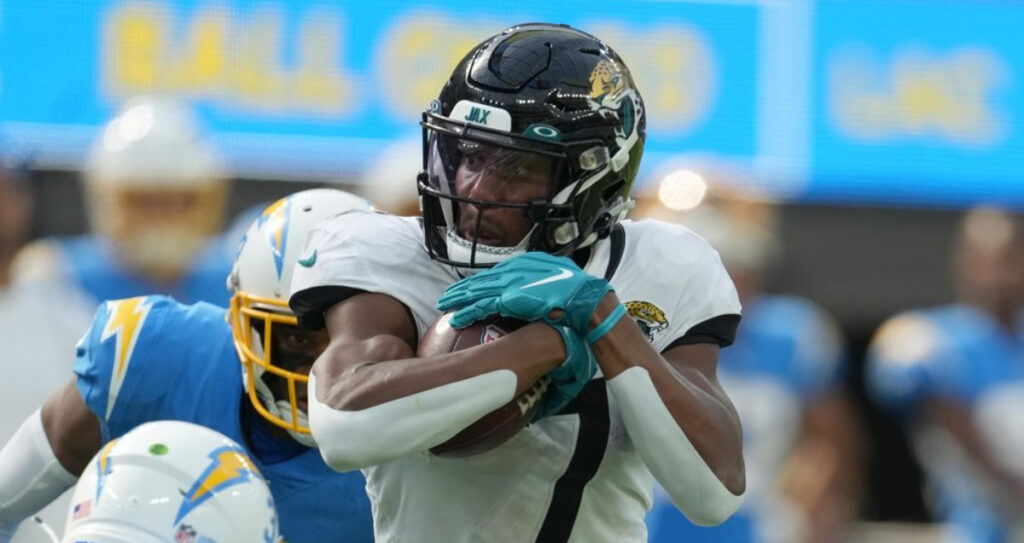 We like Zay Jones to have a big game against the Chargers on Wild Card Saturday.

This Saturday marks the start of the postseason and brings two matchups between teams that have crossed paths at least once already during the regular season. The Seattle Seahawks face division rival San Francisco on the road as 10-point underdogs in their third battle of the season to kick off the afternoon with a point total of 43.

They are followed by a rematch between the Chargers and Jaguars after Jacksonville throttled LA by four touchdowns in Week 3. The Jags are one-point home dogs this weekend and the total has climbed to 47.5.

After a 3-1 finish to Week 18’s player prop picks last Saturday we are primed and ready to carry the momentum into the Wild Card weekend. Our best prop bets for this doubleheader are presented below.

The Seahawks were tied for fourth in the league in rushing attempts over the final three weeks of the regular season, led by their rookie standout Walker who handled 78 of 105 carries.

The 49ers boasted the second-best rushing defense in the NFL this season and held Walker to 57 yards on 16 carries across their two matchups in 2022. We expect Walker to do better this time around.

This play hinges on the plan that Walker will be used without reservation to soften up a San Francisco defensive front and give the Seahawks options to keep this game close. As long as the 49ers don’t go up by 20 points in the first half we project Walker to finish somewhere between 18-24 carries and would expect him to eclipse his rushing total if that holds.

Purdy’s impressive streak of multi-touchdown games extended to six with the team’s Week 18 victory over Arizona and includes a 21-13 road victory against the Seahawks on December 15.

The rookie from Iowa State has built a strong case for rookie of the year in just over a month’s worth of games and will start his first playoff game against a familiar foe on Saturday.

San Francisco scored touchdowns from red zone possessions on just 42% of drives on their home field this season. Purdy’s run has been impressive but we expect Seattle to force the 49ers to beat them on the ground by dropping back into coverage when the field shrinks inside the 20-yard line.

Jones has been a wild card, no pun intended, in this Jaguars’ offense throughout the season, exhibited by the fact that he had six games with five targets or less and five games with 10+ targets this year.

He was targeted 11 times and hauled in 10 catches for 85 yards and a touchdown in their Week 3 matchup against the Chargers. We think Jones has a similar type of performance against Los Angeles in this one.

We’re projecting this matchup will become a shootout and that Trevor Lawrence will attempt around 30-35 passes to the benefit of guys like Jones. Play the over on his receptions this Wild Card Saturday.

In honor of Wild Card Weekend, let's have a little extra fun by throwing in a Anytime TD parlay. We feel really good about each of these 3 running backs getting into the end zone. We recommend putting a fourth of your normal wager on this, so don't go too crazy with it.

We're going to roll with Smith to stay under this number of passing yards. He had a great start to the season but has fallen off quite a bit lately. The former West Virginia Mountaineer is only averaging 222.6 passing yards over his last 5 games.

Smith did throw for 238 against San Fran back in Week 15, but most of that was in garbage time. He also only threw for 197 against the Niners back in Week 2. We're expecting him to finish close to that number this time around.

While most folks give a ton of credit to San Fran's rush defense, not enough people are talking about their underrated secondary. The Niners rank 11th in yards per pass allowed, which is pretty impressive when you consider how often they've played with large leads this season. Play the Under!