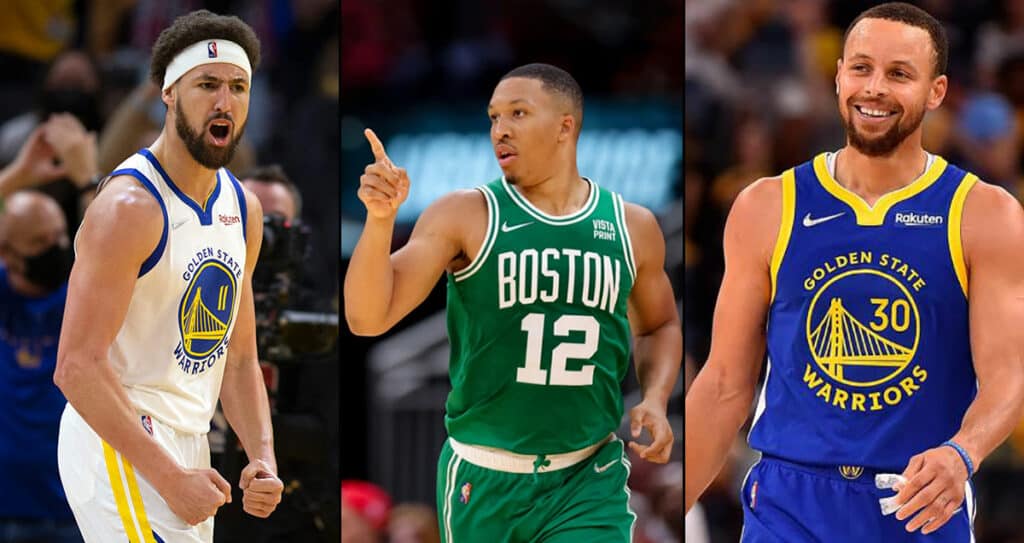 Our player props for game 3 include the points props for Klay Thompson, Grant Williams, and Steph Curry.
By Kyle Guenthner on June 8, 2022

The NBA Finals shifts to Boston with the series tied at 1 game apiece. The Celtics got the best of the Warriors with a 12-point victory in game 1. The Warriors countered that with a blowout victory at home in game 2. Both games were decided by a dominant quarter from each team. In the 4th quarter of game 1 the Celtics outscored the Warriors 40 to 16. In game 2 the Warriors outscored the Celtics 35 to 14 in the 3rd quarter which ultimately put the game out of reach.

The Boston Celtics get their first opportunity to defend home court at TD Garden Wednesday night at 9:00 PM on ABC. Looking at the game 3 odds, the Warriors visit Boston as underdogs for the first time this series. The Celtics are 3.5-point favorites, and the total is set at 212.5 for game 3 of the tied series. We have zoned in on our 3 favorite player props for game 3 of the NBA Finals.

Exclusive Prop Offers for Game 3 of the NBA Finals

Up to $100 in Free NBA Props
Claim Offer

Klay Thompson has not had his best performances thus far in the first two games of the Finals. However, this is no different from any other series this postseason. Klay has been abysmal for his standards averaging just 15.4 points on 39% shooting in the first 2 games of every series this postseason. These averages increase to 22 points per game on 48% shooting in all other games.

We believe the Celtics will make things difficult for Curry on the offensive end, which could open the floor for Thompson to finally get things going offensively. Klay’s lack of contribution offensively has been a hot topic for the media. This could add extra motivation for the sharpshooter. We believe coach Steve Kerr and the Warriors will look to get Klay back on track early and often in game 3 and he will go over 18.5 points.

Although Curry has been outstanding scoring 63 points combined in the first 2 games of this series, we do not believe he will continue to stay this hot. We expect the Celtics defense to make an emphasis to shut down Curry after he torched them in the first 2 games. Look for Curry to go under 28.5 points in game 3 of the NBA Finals in Boston.