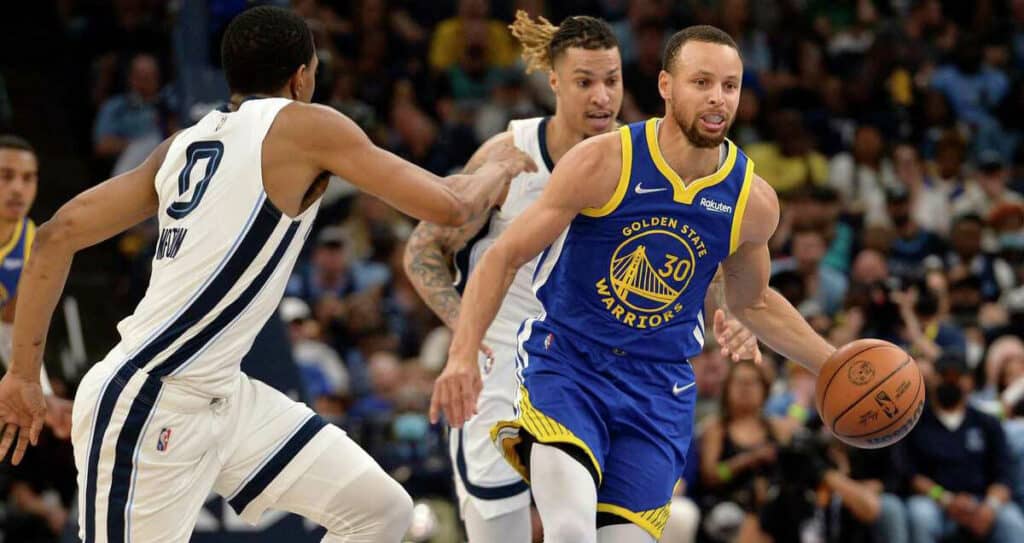 We expect Curry to have a big game, go over his points prop, and lead the Warriors to the win in game 2.
By Kyle Guenthner on May 3, 2022

Tuesday night’s TNT double header concludes at 9:30 PM ET with the Warriors visiting the Grizzlies up 1-0 in the series. The Warriors are coming off a come from behind 117-116 win as Ja Morant just missed a potential game winning layup at the buzzer. The Warriors are 2-point favorites. The total is set at 227.5 with two efficient and face-paced offenses squaring off in game 2.

We expect constant excitement in this series as displayed in game one where three young stars showed out. Jordan Poole, Ja Morant, and Jaren Jackson Jr. all scored 30+ points in the back-and-forth shootout. All 3 players filled up the stats sheet, and the Grizzlies need their stars to show out again if they want to tie up the series at 1 game apiece.

Will veteran shooters Steph Curry and Klay Thompson increase their series lead or will Ja Morant and the young Grizzlies even the series before heading to Golden State? Here are our best bets and prop bet picks for Game 2 of Grizzlies vs Warriors.

The Golden State Warriors failed to cover the 2-point spread in the first meeting of the series. Klay Thompson, who shoots about 90% from the line for his career, missed two free throws with under 10 seconds left preventing the Warriors to cover.

The Warriors were able to overcome a double-digit deficit with their best defensive player and best facilitator in Draymond Green sidelined due to a second quarter ejection. When Draymond is on the floor, the Warriors tend to play better on both ends of the court.

The Golden State Warriors have the second highest defensive rating in the NBA this season, only trailing the Boston Celtics. We believe that the Warriors swarming defense as well as playoff experience will be the difference in tonight’s game. We expect the Warriors to cover the small spread of -2 tonight.

Get $100 in Free Player Props at Underdog

Use promo code BAR at signup.

With a ton of options on the the board for game 2 of Grizzlies vs Warriors, we believe these two player props offer the most value:

The Warriors’ leading scorer has quietly had an impressive start to the postseason, overshadowed by Jordan Poole’s outstanding performances. Curry has scored more than 25 points in 4 of his last 5 postseason games. The veteran point guard is shooting 48.2% from the field and 40.7% from distance this postseason, which are both upticks from the regular season.

The Memphis Grizzlies have a top ten defense this season, but that has not bothered Steph Curry as he has averaged 36.3 points per game against Memphis this season. The high-paced play from the Grizzlies leads to more possessions for both teams, which could help Steph cash in on his point total over. We believe curry will go over his total tonight and could score 30+ in tonight’s game 2 matchup.

The Warriors allow 19.3 points per game to opposing power forwards, which benefits Clarke. With a smaller lineup for the Warriors, Clarke should have no problem scoring double digit points as well as collecting double-digit rebounds in tonight’s matchup. Look for Brandon Clarke to go well over 23.5 PTs/REBs/ASTs.