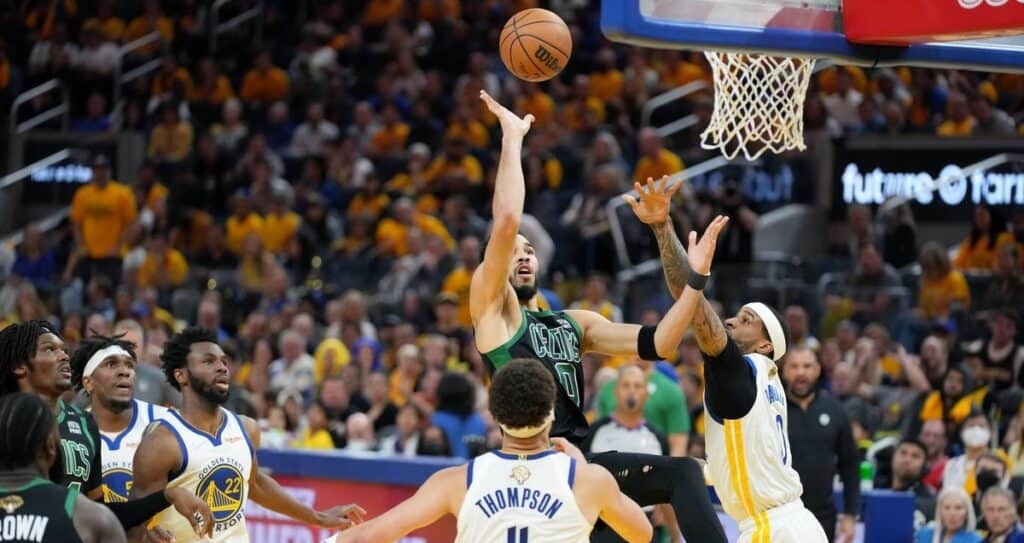 We expect Jayson Tatum to step up in a big way in Game 6 and for the Celtics to force a Game 7 in the NBA Finals.
By Nicholas Berault on June 15, 2022

Even after a couple of days to process all the stats and highlights, it still doesn’t line up how Boston allowed Game 5 to be taken from them. They, in a way, got exactly what they wanted. Steph Curry did not make a three-pointer (0-for-9) on Monday night for the first time in his last 234 combined regular and post-season games.

Golden State as a team shot 9-of-40 (22.5%) from three-point range and attempted less than half as many free throws (15) on their home floor as Boston (31). The Celtics outrebounded the Warriors 47 to 39, committed 12 fewer fouls, and didn’t let the outcome get decided in the third quarter as they had in previous games. They have a 3-2 series deficit and face elimination at home on Thursday night to show for it.

Boston made just 21 of their 31 free throw attempts (67.7%), lost the turnover battle by 11, allowed 22 points on their 18 total turnovers, and was outscored 50 to 36 in the paint. The only Celtics starter to log a positive plus/minus was Robert Williams III.

For the Warriors, Curry was their third-highest scorer at 16 points. Andrew Wiggins dropped 26 and secured 13 rebounds, Klay Thompson hit five threes and scored 21, and Gary Payton II and Jordon Poole both scored in double figures off the bench to propel the Western Conference champions to victory at home.

Golden State’s blend of experience and young talent won Game 5 over Boston’s heralded core of Jayson Tatum, Jaylen Brown, and their comparably minimal playoff experience. In what has been a postseason of letdowns and bouncebacks for the Celtics, it will be fascinating to watch how they respond to this loss on their home court with everything on the line.

Our picks fell victim to a reverse sweep on Monday night with a Warriors 10-point win and the total going under 212. We, like Boston, look to have a better performance on Thursday night for Game 6.

Best Prop Offers for Game 6 of the NBA Finals

After a 10-point loss on the road in Game 5, the Celtics are back at home for Game 6. At the time of publishing, BetMGM has Boston -3.5 still available at -115 odds, while Caesars has the best Warriors number available (+4 at -110).

The total is currently sitting between 209.5 and 210.5 at most online sportsbooks. Here are the live odds for Game 6:

Once again, the team that won Game 5 covered easily as the Warriors kept the streak of double-digit final score margins alive. This may be optimistic, but it doesn’t sit right that Boston has looked inferior to the Warriors for four of the last five quarters.

The Celtics do not need to play their best basketball to win and cover against this Warriors team. If Tatum and Brown have anything left in the tank, they’ll need to show it in Game 6. We want to be along for the ride in their quest to push this series to seven games.

Both Celtics wins in this series have come when the score goes over the total. On the flip side, all three Warriors' victories have seen the final score come in under the total.

Boston has averaged 118 points across their two wins, 25 points more than their scoring average in their three losses. In what has been a true feast or famine NBA Finals, our expectation is that Tatum, Brown, and the Celtics respond and that translates to another game that goes over the total.