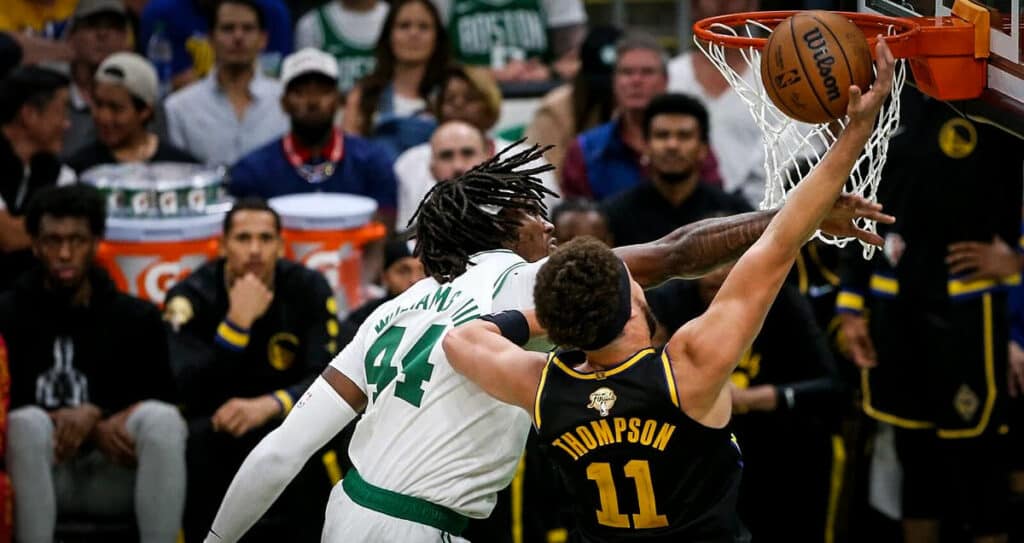 The Celtics are currently a 4 point home favorite for game 4.
By Nicholas Berault on June 10, 2022

The Golden State Warriors have their work cut out for them. They find themselves down 2-1 with a second road game in three nights ahead before returning to the Chase Center for Game 5. At this rate, the Warriors could be forced to stave off elimination in that game after another strong 4th quarter from the Celtics and what looks to be a concerning situation with Steph Curry’s infamous left ankle. Golden State had eliminated a 12-point halftime deficit to take the lead with less than four minutes remaining in the third quarter, as they are known to do, before ultimately faltering to shoot 4-of-14 from the floor in the fourth and lose by 16.

The loss was magnified by Curry’s ankle injury re-aggravation, which occurred when Al Horford landed on his leg while attempting to go after a loose ball. Curry remained in the game until the outcome was no longer in doubt, and has insisted he will play in Game 4. He indicated in a press conference Thursday that he felt a similar feeling in that left ankle when Marcus Smart landed on it in a game on March 16, but this time doesn’t feel as serious.

Meanwhile, things seem to be progressing in this series for the Celtics as well as they could have expected. Jayson Tatum and Jaylen Brown each scored more than 25 points in Game 3, Marcus Smart added 24, and they out rebounded the Warriors by 16. If they defend home court again in Game 4, Boston will be on the cusp of their first title since the Big Three of Paul Pierce, Kevin Garnett, and Ray Allen won in 2008.

After a 1-1 result Wednesday, we’ve got another round of best bets for the side and total of NBA Finals Game 4.

Best Prop Offers for Game 4 of the NBA Finals

After a 16 point victory at the Garden on Wednesday, the Celtics opened as 3.5 point favorites for game 4 with that number already moving to 4 points at most sportsbooks. At the time of publishing, BetMGM has Boston -3.5 still available, while DraftKings has the best Warriors number available (+4 at -110). The total opened at 213.5, moved up to 215 early, but has settled in between 214 and 214.5 at most books.

Looking for even more Game 4 coverage? We've covered the top player props on the board as well as a complete Game 4 DFS strategy breakdown for tonight as well. Here are the live odds and best numbers available for game 4:

This game’s line, in comparison to Game 3, is not putting much stock in the potential impact of Curry’s ankle injury. Boston dominated under the basket on Wednesday for the first time this series, including 52 points in the paint compared to Golden State’s 26. Six Celtics players had 5 or more rebounds, with Robert Williams imposing his will defensively by snagging 10 rebounds and blocking four shots. Momentum appears to be fully shifting their way, but the line is not moving to reflect that. We’ll lean into the lack of line movement by playing the Warriors in the underdog role on Friday.

Both teams limped to the finish line on Wednesday, making it appear as though the total had a chance to be in play if you just checked the final score. In reality, this one was never in doubt and was sealed up with four minutes to go in the fourth quarter before the real scoring slowdown occurred. With Curry potentially hampered by this left ankle and Tatum only making 9-of-23 shot attempts in Game 3, we expect to see another regression in scoring like we did in Game 2. We’ll continue to play the under in these Finals with the Friday night total set at 214, and may look for some second half action with these two teams averaging less than 93 combined second half points the last two games.