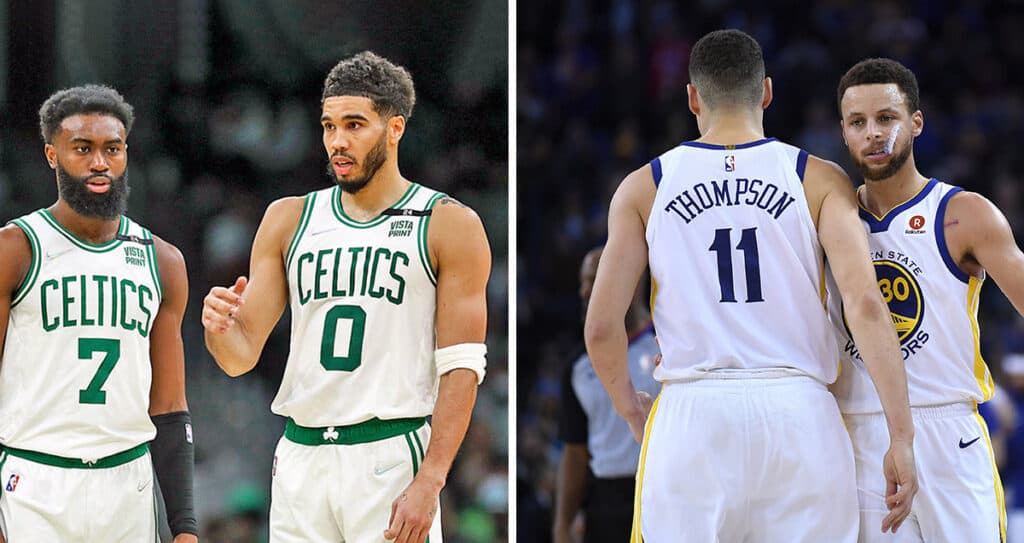 Golden State will travel to Boston in a pivotal NBA Finals Game 3 matchup.
By Nicholas Berault on June 7, 2022

Golden State put on a third quarter show in Game 2 reminiscent of their dominant run from 2015 - 18. Similar to what the Celtics had done in the fourth quarter of Game 1, the Warriors outscored them 35-14 to take a 23-point lead that would not be in jeopardy again. The series, even a one game apiece, now heads to Boston for games on Wednesday and Friday.

Boston has been far from dominant at home this postseason. They’ve won five of nine games played at TD Garden, but lost two out of three to the Miami Heat before clinching a berth in the Finals on the road.

No Boston player who took more than five shot attempts in Game 2 shot above 50% from the field, a feat they cannot repeat if they expect to win. Jayson Tatum grimaced his way through some shoulder pain to 28 points, although Boston had a -36 point differential with him on the court. That marks his lowest +/- performance this season, and the worst of his playoff career.

Steph Curry scored 29 points in 32 min to lead the Warriors on Sunday, and Jordan Poole reappeared to contribute 17 points, including some highlight reel three-pointers. As the series swings to Boston tied at one, we’re ready to put a 3-1 NBA Finals best bet record on the line with picks for Wednesday’s Game 3.

Boston opened as 3.5 point home favorites, and with good reason. Golden State’s road record in the 2022 playoffs has been far from stellar. They are 3-4 in 7 road games through the first three series, with a point differential of -44 in those seven games.

At the time of publishing, BetRivers had the best available number for both the Warriors and the Celtics at -110. The total, which opened at 212.5, has moved to 212 at several book. Here's a live look at the best game 3 odds available for both sides and the total:

The Warriors pick in Game 2 was almost as stress-free as they come. That third quarter rally all but sealed the Celtics fate, and when Boston began to empty their bench with over 10 minutes to go in the fourth quarter it was early celebration time. Tatum’s shoulder issue seems to be nagging him more than the blank Celtics’ injury report indicates, which makes this handicap that much less clear. He also has yet to string together several games in a row of MVP-like performances.

Jaylen Brown and the rest of Boston’s offensive weapons struggled to keep up with the Warriors shooting display in Game 2, but that was uncharacteristic compared to a larger sample of these playoffs. We expect a bounce back game from Brown, Al Horford, Marcus Smart and company to contribute to a Celtics win and cover at home.

Our under play for Game 2 was another clear winner after a 41-point second quarter and 49-point third. Picking a third straight NBA Finals under may not be the most appealing selection, but the Celtics as a team are averaging 5 less points per game in the playoffs than they did in the regular season and are only allowing 101 points per game while they’re at it.

Given that we’ve reviewed the Warriors sub-par record on the road this postseason, we’ll trust a motivated, talented Celtics defense to stifle Golden State’s shooters at home while not outperforming on the offensive end themselves.