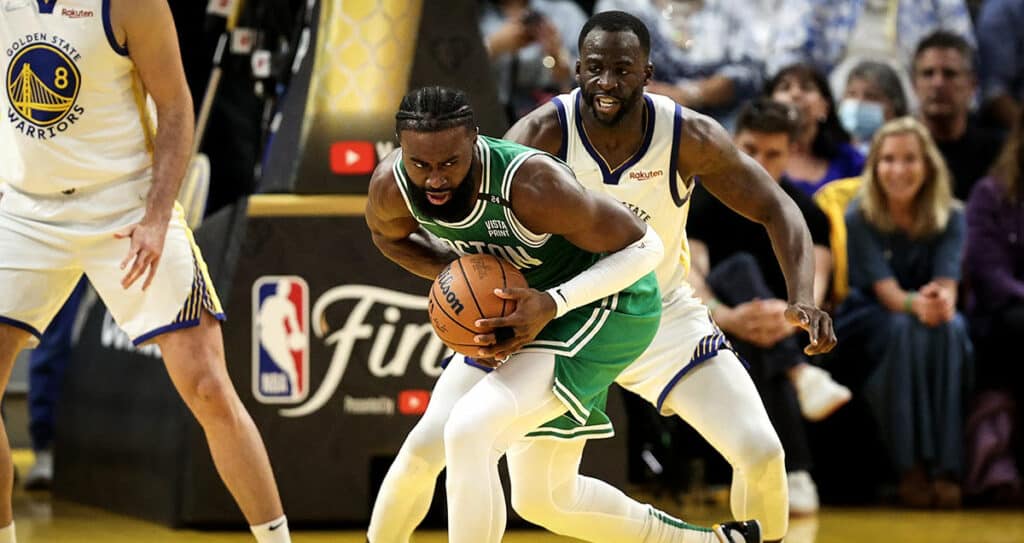 Jaylen Brown and Draymond Green are among our favorite props for Friday's Game 4.
By Kyle Guenthner on June 10, 2022

The Boston Celtics have grabbed their second lead in the NBA Finals after a 116-100 victory in game 3 in Boston. Steph and Klay combined for over half of their teams points as Steph scored 31 points and Klay finished with 25. The Celtics starters dominated as they scored 4 points shy of the century mark on their own led by Brown (27), Tatum (26), and Smart (24).

The Celtics enter game 4 as 4-point favorites at home. The over/under is set at 214 as the Warriors look to even the series on the road. We have zoned in on our 3 favorite player props for game 4 of the NBA Finals.

Best Prop Offers for Game 4 of the NBA Finals

Jordan Poole has had an outstanding postseason to this point. The young rising star is averaging 17.4 points, 3.1 rebounds, and 4.2 assists per game this postseason. Poole is the third leading scorer for the Warriors behind only Curry and Klay. His shooting percentage on the road drops by less than 0.5%, but his shot attempts have decrease by more than a full shot a game. Poole is still averaging 15.8 points per game on the road despite taking less shots.

Although Poole has struggled a bit on the road in the playoffs, the Warriors will need him to play a huge role in game 4 in Boston. Curry seemed to end game 3 a little hobbled after a scuffle for a loose ball. This could lead to more play time for the Michigan alum and more production offensively as a result. We believe Jordan Poole will have an impressive performance and go over 11.5 points Friday night.

Jaylen Brown had an outstanding performance in game 3 at TD Garden with a team-high 27 points. Brown started the game on fire as he scored 17 of his 27 in the first quarter. Brown’s presence on offense slowly dwindled as the game went on. We believe this could translate over to game 4 and lead to his point prop going under. Brown has only gone over 24.5 points once in the past 5 postseasons games. Also, he is only averaging 22.9 points per game in the postseason. We believe this line is too high and Brown will go under 24.5 points for the fifth time in 6 games.

Best Available Odds: at +110 at Caesars

Draymond Green is coming off of his worst playoff performance of the season. Draymond fouled out after putting up just 2 points, 3 assists, and 4 rebounds in game 3. Green has heard a lot of criticism from fans and the media, and he will need a strong performance to change the narrative.

Green is averaging 6.4 rebounds and 6 assists in his last 5 postseason games. He has done this while playing less minutes on average due to a couple blowouts and fouling out in the previous game. We expect Green to be motivated and play aggressive on both ends of the floor after telling the media he played too “soft” in game 3. Look for Green to fill the stat sheet and go over 12. Rebounds + assists in game 4 on the road.