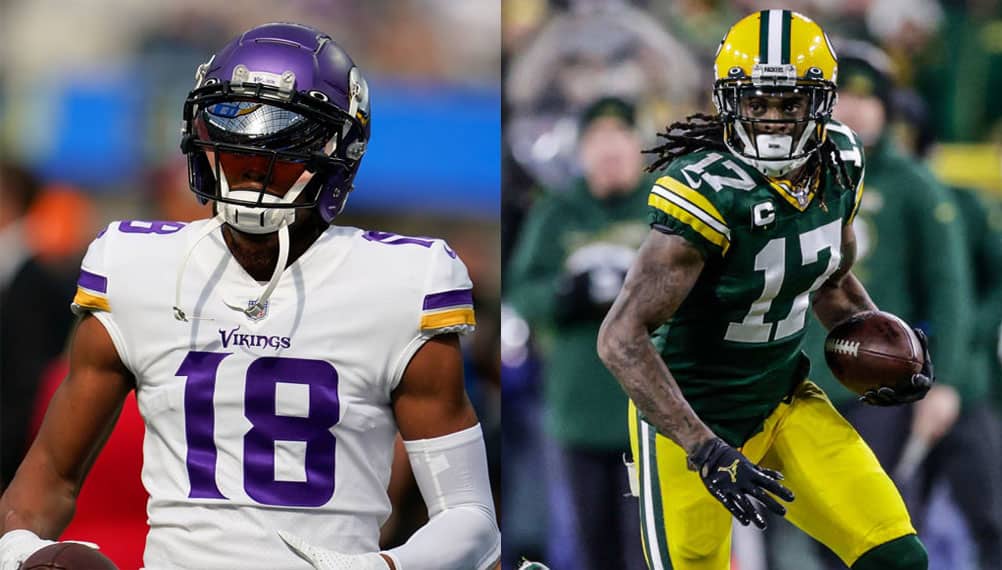 The NFL and NFLPA have reached an agreement to change their COVID-19 protocols. The mandatory isolation period for a player that tests positive has been reduced from 10 days to 5 days. This should mean that fewer players will miss games every week, which should make the games less stressful to handicap.

Prop betting has exploded in popularity in recent years! Thanks to props, football fans are no longer limited to just side and total betting. Let’s take a look at the best prop bets for the Sunday Night Football matchup between the Minnesota Vikings and the Green Bay Packers.

While this number has already reached 27 at some online sportsbooks, we found 26.5 over at DraftKings. We don’t mind paying a little extra juice for this since 27 is such a key number when betting on team totals.

Why do we like this bet so much? It’s simple. This Green Bay offense has been on fire of late and it shows no signs of slowing down.

The Packers have scored at least 27 points in four out of their last five games. They put up 31 on Baltimore, 45 on Chicago, 36 on the Rams, and 31 on this same Minnesota team back in Week 11. We expect Aaron Rodgers to continue his insanely hot play and get the Pack to the 30s on the scoreboard once again in this game.

The Vikings’ defense has held them back all season long. This group gives up 24.8 points per game (23rd) and 5.7 yards per play (26th). They haven’t been in great current form either, as they’ve given up 28 or more points in five out of their last six games.

Another reason we like the Packers to go over this point total is the Vikings’ poor red zone defense. Minnesota gives up a touchdown 60% of the time once their opponent crosses the 20-yard line. That ranks 20th in the NFL.

It’s hard not to like A.J. “Quadzilla” Dillon for his hard-nosed running style. Dillon has been giving defenses headaches since his collegiate days at Boston College.

This kid is a load to bring down at 247 pounds and Green Bay is finally starting to use him more in goal-line situations. Though he shares playing time with Aaron Jones, we still think this +110 number for Dillon to score a TD presents a good amount of value.

The 23-year old has scored 3 rushing touchdowns and 2 receiving touchdowns already this season. We think Dillon will add another TD to his yearly total against this putrid Vikings run defense.

Minnesota gives up 4.7 yards per rush (28th) and 130.5 rushing yards per game (28th). With bad numbers like that, this prop is sounding more and more attractive!

While we were tempted to bet All-World WR Davante Adams in this spot, the -165 price tag seemed a little bit steep to us. Allen Lazard has finally had the type of breakthrough season that Packers fans have been waiting for.

The former Iowa State Cyclone has snagged 5 touchdowns already this season and Aaron Rodgers is starting to trust him even more inside the red zone. We think Lazard could have a big game, especially with the Vikings’ secondary giving Adams all the attention.

Speaking of the Vikings’ secondary, they’ve been awful this year against the pass. Minnesota ranks 25th in yards per pass allowed and 27th in passing yards allowed per game.

At 6-5 and 227 pounds, Lazard should be able to exploit some of the Vikings’ smaller defensive backs. This +200 number is just too juicy for us to pass up.

This one looks like a no-brainer! Yes, we know that Green Bay plays the pass extremely well. The Packers rank 4th in yards per pass and 10th in passing yards allowed.

However, Jefferson torched this secondary for 169 yards and 2 TDs back in Week 11. We don’t see Green Bay slowing him down in this game either! The former LSU Tiger runs crisp routes and has the speed to burn any cornerback on deep plays.

Because of their lackluster defense, the Vikes will have to chuck the ball around the yard quite a bit just to try and keep up. That means that Kirk Cousins will be throwing in Jefferson’s direction plenty of times in this game.

We see Jefferson finding the end zone at least once in what should be a fairly high-scoring game. Our numbers say this line should be closer to -130 or so, which means we’ll gladly take the nice +100 price.

Prop Special: Justin Jefferson and Davante Adams to Each Have 100+ Receiving Yards and 1+ TD (+800)

We usually don’t pay too much attention to prop specials since it’s so hard to find much value in them. However, we think we found a good one this week over at FanDuel.

We’ve already talked about how Justin Jefferson embarrassed this Green Bay secondary just a few weeks ago. Davante Adams did the same thing in Week 11 to this Minnesota secondary.

The former Fresno State star racked up 115 receiving yards and 2 TDs the last time these two teams met. As bad as this Vikings’ secondary is, Adams should have a good chance of putting up similar numbers on Sunday Night Football.

We don’t see either defense slowing down either one of these stud wide receivers. It’s tough to place a bet that needs four different outcomes to win, but the +800 price is just way too tempting.

Let’s cheer for a fantastic Sunday Night Football game with tons of points! Best of luck with all your Week 17 bets!