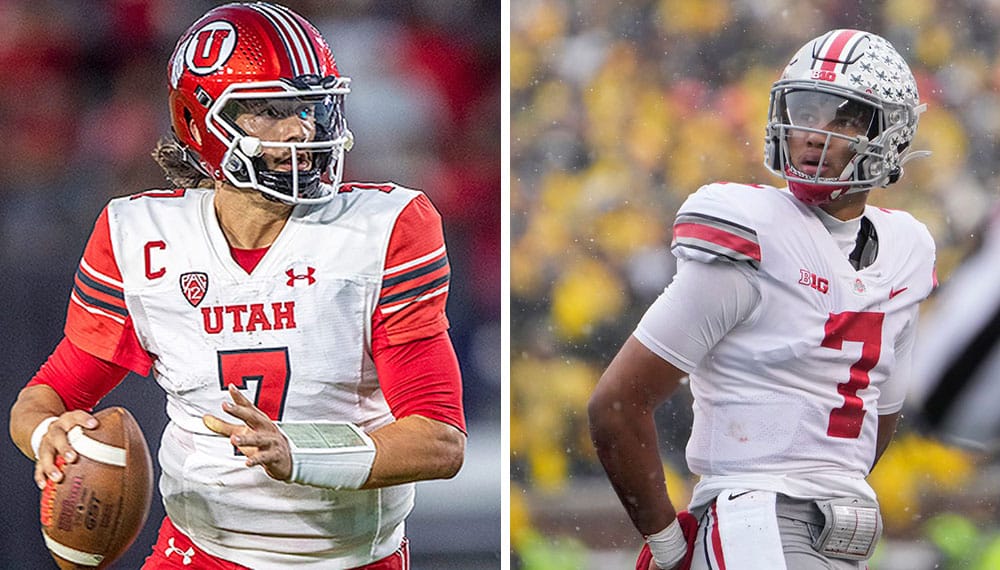 Welcome back to our look at each of the New Year’s 6 Bowl games. Today we’ll cover The Granddaddy of them all, The Rose Bowl. The Utah Utes (10-3) will take on the Ohio State Buckeyes (10-2) on New Year’s Day at 5:00 PM Eastern Time on ESPN.

Utah has been one of the hottest teams in the country, as they’ve won six straight games! Will the Utes continue to stay hot, or will the Buckeyes’ high-powered offense be too much? Let’s take a look at the live odds for this game before giving out our Best Bet.

What to Expect from the Utah Offense in The Rose Bowl

It’s remarkable to think about how much the Utes’ offense improved once former Baylor QB Charlie Brewer left town. Cameron Rising is a much better fit for this offense, and he had a tremendous season by throwing for 2,279 yards and 18 TDs. The 6-2 sophomore also found the end zone five times on the ground.

The Utes have the best rushing attack in the country as they rank 1st in EPA per rush. They also rank 3rd in yards per rush with an average gain of 5.6 yards each time they run the football. Tavion Thomas is the engine behind this running game, as he has run for 1,041 yards and 20 TDs this season.

As for the Utes’ passing game, they are fairly mediocre, as they only rank 59th in EPA per pass. Brant Kuithe is one of Rising’s favorite targets. The 6-2 tight end caught 44 passes for 534 yards and 6 TDs.

The Buckeyes’ defense got exposed a bit by Michigan a few weeks ago. This unit will be looking to bounce back from that performance. Ohio State ranks 21st in points per game allowed, 28th in yards per play allowed, and 21st in yards per rush allowed.

Though the Buckeyes are decent in a few defensive categories, they’ve struggled to get off the field on third down all season long. Ohio State ranks 92nd in third-down conversion percentage allowed. They’ve also struggled inside the red zone for most of the season.

Ohio State has a couple of stud pass rushers in Haskell Garrett and Tyleik Williams. Garrett leads the team with 5.5 sacks while Williams is close behind with 5 sacks. Ronnie Hickman and Craig Young are tied for the team lead with 2 INTs apiece.

The hot topic of this game for the Ohio State offense is whether or not star wide receivers Garrett Wilson and Chris Olave will play. Both of them have a chance to be first-round NFL Draft picks in a few months so they may choose to opt-out of this game. If neither of them plays, it will hurt the Buckeyes’ offense.

QB C.J. Stroud had a phenomenal season by throwing for 3,862 yards and 38 TDs. Even if Wilson and Olave don’t play, Stroud still has a key playmaker in Jaxson Smith-Njigba, who caught 80 passes for 1,259 yards and 6 TDs. Also, don’t forget about tight end Jeremy Ruckert, who could be a matchup problem over the middle.

Even with an efficient passing attack, the running game is still Ohio State’s bread and butter. The Buckeyes average 5.6 yards per carry, which ranks 4th in the nation. RB TreVeyon Henderson has plenty of speed and he ran for 1,172 yards and 15 TDs.

What to Expect from the Utah Defense in The Rose Bowl

The Utes’ defense struggled a bit during the early portion of the season, but they turned the corner after losing to Oregon State. Utah only does an average job of stopping the run (53rd in EPA per rush allowed) and that could be an issue against the Buckeyes’ stout rushing attack. The Utes’ best run stopper is Devin Lloyd, who leads the team in tackles for loss with 22.

Utah does an excellent job of pressuring opposing quarterbacks. Lloyd has racked up 7 sacks while Mike Tafua leads the team with 9.5. Look for head coach Kyle Whittingham to try to put some pressure on Stroud as much as he can.

The strength of this Utah defense is their secondary as they only allow 6.2 yards per pass (11th). This unit seems to have a knack for limiting big plays. The Utes rank 17th in passing yards per game allowed.

Even though both of these defenses are above average, we don’t see either of them getting many stops in this game. This total opened at 67 points but was bet down on the speculation that Olave and Wilson would opt out of this game. Even if both sit out, the Bucks still have a stable of five-star recruits that are hungry for playing time.

We think the Utes should be able to pass the ball with great success against a Buckeyes defense that only ranks 64th in EPA per pass allowed. Rising proved by beating Oregon twice that he can withstand the pressure of primetime games.

This should be a fun game to watch with lots of fireworks. We don’t see any reason why this game won’t be played in the 70s. Our final score prediction is 38-35 so take the Over! Best of luck!