Utah State at BYU - Live Odds and Our 2 Best Bets 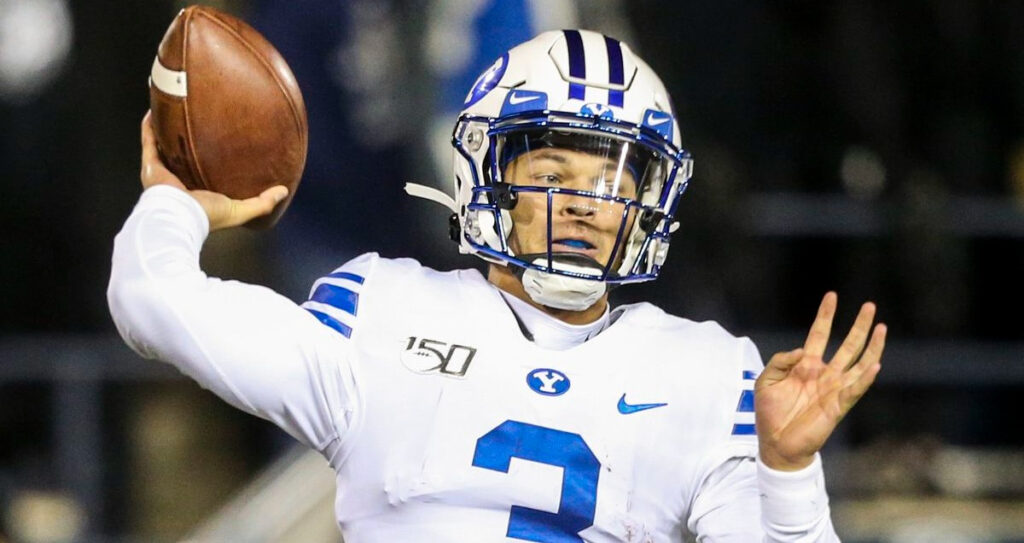 Jaren Hall should have a big game, but we still like Utah State to cover the spread against BYU.

It was an ugly Thursday night last week as both of our plays fell flat on their faces. Both Virginia Tech and Georgia State were catching a couple of points but needed much more to cover in their games.

This week we have just one game this Thursday that has a spread attached to it. South Carolina State vs South Carolina is not on the board for us to venture a play on, but we do have an in-state battle between Utah State and BYU.

Just like we have done with our Thursday Night Football games for the NFL, we are going to give out our 2 best bets for the spread and the total here for Utah State at BYU. Let’s take a look at what we have available and why we like the side a bit more than the total here.

Utah State is just 1-3 on the year and currently on a 3-game losing streak. After defeating UConn 31-20 in the season opener, the Aggies got smoked 55-0 at Alabama. Then, while licking their wounds, they were smacked 35-7 by Weber State.

Most recently, they lost 34-24 at home to UNLV. Logan Bonner has been inconsistent in leading the offense and his 57% completion percentage punctuates this. He does have 6 touchdown passes but it is being outweighed by 8 interceptions.

As a team, the Aggies are an abysmal 25% on third down which is 262nd in the country. They have allowed an average of 36 points per game to opponents while only averaging 15.5 points of their own.

BYU is currently ranked #19 after starting off with a 3-1 record. The Cougars picked up a monster win over #9 Baylor in Week 2. However, they were handed a 41-20 loss the following week to #25 Oregon.

They since bounced back with a 38-24 win over Wyoming at home last week. Jaren Hall is averaging just under 300 yards passing and has 9 touchdown passes to just 1 interception.

Keanu Hill has been his favorite target. Hill has accumulated 283 yards on 14 catches and 3 touchdowns.

All the statistics point to BYU demolishing this underachieving Aggies team on Thursday. The public is all over the Cougars with 77% of the bets and 89% of the money coming in on BYU. However, the spread has not changed.

The total is in the 60s which indicates to use there will be a good amount of scoring and with the BYU defense being their weakness, we believe the Aggies will score enough to stay within 3 touchdowns of the Cougars here.

Utah State is averaging under 17 points per game and if we are expecting them to stay in the game, it is going to occur with them scoring more than their average. The Cougars have been susceptible to allowing more points to their opponents than they have been averaging.

BYU gave up 21 to USF who just recently was held to 3 points against Louisville and 24 to Wyoming. The Cowboys had scored just 17 the week prior and were held to 3 in their season opener against Illinois.

We see the Aggies putting up 24+ points here and that should be enough to push this game over the total. Also, the Cougars shouldn't have much trouble scoring on the Aggies' defense. Hall and company should be able to get to around 40 points, which should bode well for our Over!